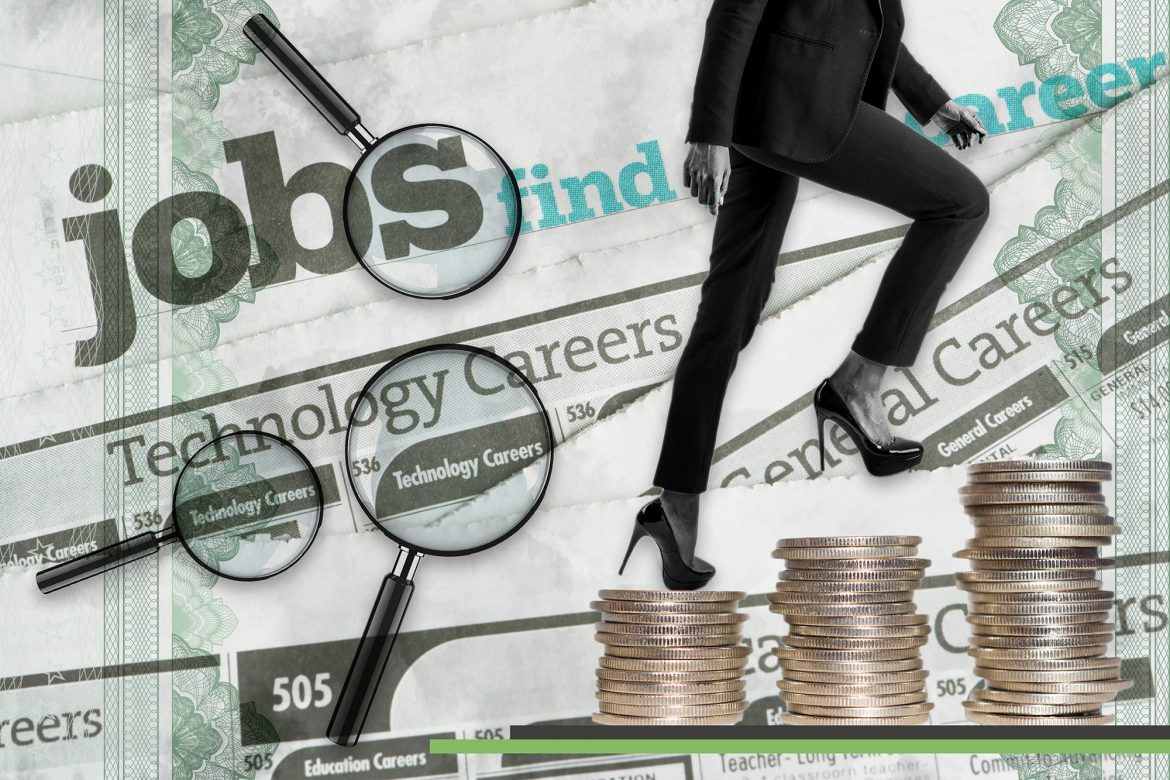 If you’re one of many Californians looking for a job, chances are you’ve run into some familiar frustrations: unclear pay ranges and benefits. And how do you know if the company is a good employer?

If two Democratic state lawmakers have their way, employers might soon have to disclose a lot more information about pay and internal practices. Both bills, working their way through the California Legislature, face ardent opposition from powerful business groups, who fear the proposed laws could lead to unfair comparisons and expensive lawsuits.

The bills are part of a larger push from states, the federal government and, in some cases, employers themselves to make companies more transparent. The California legislators have two goals: shrink gender- and race-based pay gaps, while also increasing the quality of jobs.

Companies in several states — including California — currently must tell workers about a job’s pay ranges upon request, while Colorado, Washington and New York City have passed measures in recent years requiring companies to put pay ranges in job postings. Intel has begun publishing data on how it pays its workforce, and an increasing share of the largest companies disclose some data on their racial and ethnic makeup. Meanwhile, the chair of the federal Securities and Exchange Commission is interested in new rules that would make public companies disclose data about how they treat their employees.

As California trudges out of the pandemic and companies try to hire or retain workers, the timing is right for legislation that zeroes in on “what it really means to be a high quality employer,” said Ash Kalra, chair of the Assembly’s labor and employment committee and a Democrat from San Jose.

When Jessica Seifert applied to work at Riot Games, a video game company based in Los Angeles, pay range wasn’t mentioned in the job description, she said. The company, known for its popular “League of Legends” game, first brought her on as a contractor in 2014 and then hired her full time to onboard new employees, she said. She found out a male peer was making $90,000 per year while she was making $70,000, and she began talking with co-workers about pay. The upshot: Women were often getting paid less for doing similar jobs, she said.

Gender- and race-based pay gaps persist across the U.S. In California, the average annual pay for women is $50,313 while men earn $57,457, according to Census Bureau data. Meanwhile, more than a third of Californians were in poverty — with less than $35,600 for a family of four on average — or near it in 2019 according to the Public Policy Institute of California.  That year, 80% of poor Californians lived in a family with at least one working adult.

To close pay gaps, reduce working poverty and improve job quality, legislators have turned to the same mechanism: making stuff public. One bill, introduced by Monique Limón, a Democratic state senator from Santa Barbara, would require companies to include pay ranges in job postings and let workers know when promotion opportunities are available. For companies with 250 or more employees, pay data for 10 broad job categories would get published starting in 2026, broken out by race and gender. For larger companies, the publication date is sooner. The bill would also require companies using 100 or more contractors to report pay data for contractors.

The hope is that with more information about potential pay, women will be able to negotiate higher wages, said Jessica Ramey Stender, policy director for Equal Rights Advocates, a bill sponsor.

A second bill, introduced by Assemblymember Kalra, would be a first-in-the-nation measure to make companies with 1,000 or more workers in California annually report a broad swath of data about how they treat employees to the state’s labor agency. The data include workforce size, scheduling, pay, internal promotions, benefits, safety, turnover rate, equity, and more. The labor agency would begin posting the information online in 2024.

The eventual aim is to create a certification for employers who treat their workers well, said Betty Yee, California’s controller and the bill’s sponsor. The certification would come with benefits — maybe tax credits, or a better shot at getting state contracts — as an incentive. The data would also get condensed into an easy-to-understand measure for the public, sort of like nutrition labels on food.

“Why is all this information in a black box?” said Rick Wartzman, who developed the data required by the bill and tested the measures with a few large companies. Wartzman, who leads a center at the Drucker Institute, a think tank at Claremont Graduate University,  thinks everyone from investors to job seekers would have their own reasons for wanting the breakdown.

“Maybe you like to shop at places that treat their workers well, and you don’t want to patronize places that don’t, but how would you really know?” Wartzman said.

People find pay ranges in job postings useful, according to LinkedIn. Another indicator: In the federal government, which includes salaries in its job postings, women earn 93 cents for every dollar men make, compared to the national average of 83 cents. And when women have a clear sense of what to expect from negotiation, gender gaps shrink, according to a review of studies published in National Bureau of Economic Research.

Research on countries and states that require companies to share pay data or report on their gender wage gap shows mixed results. Australia saw the gender pay gap at many of its companies decline by about four percentage points, while the United Kingdom saw gender pay gaps increase slightly after instituting a reporting law in 2017.

When researchers examined a Denmark law requiring companies to disclose pay data by gender, they found that companies required to comply with the law shrank the gender pay gap by 7%, while other companies saw no change. Reporting companies were also more likely to hire women and promote female employees. But the main way companies shrank their pay gaps wasn’t by increasing pay for women pay, researchers found — it was by slowing wage increases for male employees.

After pay becomes more public, the impact comes in two stages, said Zoe Cullen, a professor at Harvard Business School. First, workers might use that information to negotiate raises. But the second step is the company’s reaction: If they know raising pay for one worker could lead to renegotiation with a bunch of other workers, employers might bargain more aggressively and set lower wages on average, Cullen said. One study she conducted looked at states before and after they passed laws protecting workers who talk with each other about wages, and found that the laws lead wages to decline by about 2%.

In other words, research suggests there’s a tradeoff: Under transparency measures, the pay gap seems to shrink, but wages decrease on average.

When Colorado passed a law requiring companies to include pay ranges in job postings, it encountered another unwelcome move from employers. In an attempt to skirt the law, some companies started posting roles that allowed applicants to work from any state — except Colorado. Since then, Washington and New York City have passed similar laws.

The powerful lobbying operation at the California Chamber of Commerce has put both bills on its “job-killer” list — the collection of measures it opposes most aggressively each year.

The group’s self-reported kill rate of its “job killers” is high. In 2021, it had 25 bills on the list; one got signed into law.

One of the Chamber’s concerns with both bills is that publishing the data won’t capture sufficient context about why some pay differences are justified, or why some businesses don’t perform as well on workforce metrics compared to other companies in their industry.

For the bill that would publish pay ranges and data, “our concern largely lies with: What does this data actually show versus how is it going to be used?,” said Ashley Hoffman, a lobbyist for the Chamber. The reports themselves might not reveal illegal pay discrimination, but, said Hoffman, “What are the headlines going to be?” She also fears it might generate expensive lawsuits for companies, which is part of the reason the group tagged it a “job killer.”

“I know the opposition likes to say that this is a bill that’s going to shame,” said Limón, the state senator who introduced the pay range bill. “We do not believe that the act of making accurate information public is an act of shaming.”

The workforce metrics bill could create unfair comparisons between companies, Hoffman said. On several measures, including pay, companies have to share data on their whole U.S. workforce. A company with a lot of workers in states with low costs of living might have much lower pay on average than a company whose entire workforce is in California, and has high wages to match.

Another line of opposition — this one from Kelly Seyarto, a Republican state assemblymember from Murrieta — is that adding more regulations and requirements for companies would hurt California in its competition with other states to attract and retain companies.

“While it might be the first in the nation, I also see that as: We’re the guinea pigs. And I don’t know that we can afford to be guinea pigs anymore, especially when it comes to attracting businesses in California,” Seyarto said in a hearing about the worker metrics bill.

Both bills would have to pass through more committees in the Legislature before getting a final vote. The workforce metrics bill from Assemblymember Kalra has been put on “suspense file” — a temporary parking lot for bills that’s officially for assessing their fiscal impact, but is often used to kill them with little public discussion.

California has been a laboratory for progressive labor measures, said Ken Jacobs, chair of the UC Berkeley Labor Center. He rattled off examples: The first paid sick leave law in America was passed in San Francisco. California and New York passed the first statewide $15 per hour minimum wage laws on the same day, he said, while San Francisco passed one of the first laws addressing irregular scheduling.  It “becomes proof of concept when a state like California puts these measures in place,” Jacobs said.

At Riot Games, concerns like those raised by Seifert, bolstered by explosive reporting on the company’s culture of sexism, led to a class-action gender discrimination lawsuit filed in 2018 against the company.  In December 2021, Riot agreed to pay $100 million in a settlement deal, most of which will go to current and former female employees in California. The company also agreed to several policy changes, including making its pay data reports available to workers upon request.

Seifert, who is no longer at Riot, now works as a recruiter. She always talks about pay ranges early on with candidates, she said. She doesn’t want to waste their time — or her own.