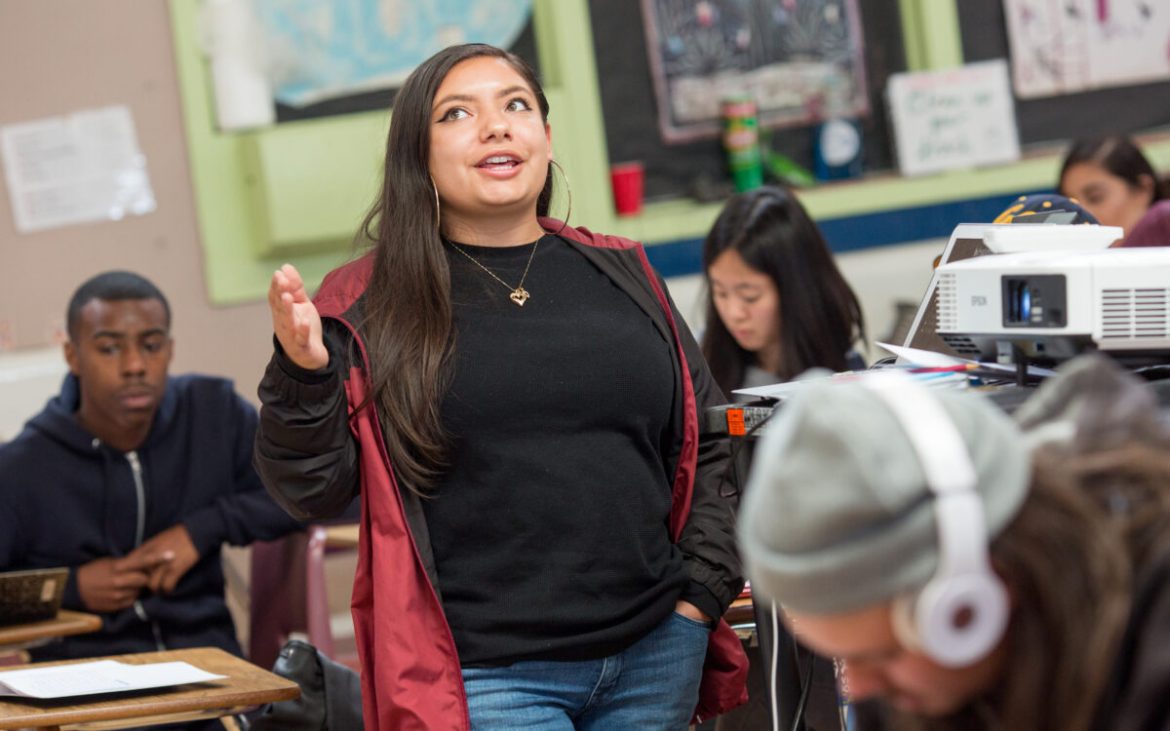 A student shares her research results during a class presentation.

An influential committee of University of California faculty that oversees academic admissions requirements is proposing that UC set criteria and content for high school ethnic studies courses similar to what the State Board of Education rejected two years ago as divisive.

If adopted, the requirements (see pages 11-12) would circumvent both a state law and the ethnic studies model curriculum that the state board adopted in March 2021. Both give local districts the authority to decide what should be taught in ethnic studies.

Instead, one of many course goals that UC would require would be to prepare students to “address and dismantle systems of oppression and dehumanization in the many forms in which they appear.” Another would be to prepare students to “recognize and interrogate power and oppression at ideological, institutional, interpersonal, and internalized levels.”

As word spread of the proposal, more than 100 faculty members sent a letter sharply criticizing it to UC’s Academic Council, which is made up of leadership of the Academic Senate. Contrary to the admissions requirements to ensure students are intellectually prepared for college work, the ethnic studies proposal “smacks instead of an attempt to teach students a particular take on a range of highly controversial issues” and “will undoubtedly generate profound opposition,” the letter read. “The university should never be in the position of forcing a particular political agenda upon its own students – let alone all upon UC applicants across the state and the nation.”

Another letter signed by nearly 2,000 individuals, including 1,200 UC students, family members, alumni and donors, called the proposal “a highly politicized curriculum” that “will incite bigotry and hatred in California classrooms.”

AMCHA Initiative, a nonprofit organization that investigates and combats antisemitism at institutions of higher education, authored the letter. Although there’s no mention of the Israeli-Palestinian conflict in the proposed UC guidance, Tammi Rossman-Benjamin, a retired lecturer in Jewish and Hebrew studies at UC Santa Cruz who is AMCHA’s director, is still wary.

“Dividing between oppressed and oppressor groups, and painting Israel through an anti-colonialist lens will lead to anti-Zionism and antisemitism,” said Rossman-Benjamin.

The proposal surfaces as many California school districts are trying to figure out how to create ethnic studies courses that strike a balance between teaching the struggles and the legacy of discrimination of Black Americans, Latinos, Native Americans and Asian Americans, the traditional focus of ethnics studies, and celebrating their cultures and accomplishments.

The mandate will take effect with the graduating class of 2029-30, although high schools must start to offer courses starting in the 2025-26 school year. AB 101 would leave it up to each district to decide what’s in a course.

At the same time, in a backlash against discussions of race and negative perceptions of ethnic studies, legislatures in conservative states like Texas and a handful of California schools boards, including Placentia-Yorba Linda Unified, have banned “critical race theory,” a framework for explaining entrenched racism in law and in political institutions that has become a vague, catch-all term for what opponents suspect is being taught in the classroom rather than what actually is being taught. Nonetheless, the concepts of critical race theory are foundational to college ethnic study courses and would become part of California high school courses under the proposed course criteria.

At the UC system, the Board of Admissions and Relations with Schools, or BOARS, as the committee is known, is also proposing to mandate a half-semester of ethnic studies for high school students who plan to apply to a UC campus. Known as A-G curriculum requirements, the new course would add a new letter “H” to the set of 15 math, English, science, history, foreign language and visual/performing arts courses that are required for admission to UC. Ethnic studies would not be an additional course; it would replace another elective or be the focus of an English or history course.

Since the California State University system has adopted the same course requirements, the new ethnic studies mandate would apply to applicants to CSU campuses, too.

BOARS has been quietly developing the proposal, with the knowledge of the UC Office of the President, for a year-and-a-half. Before it can be adopted, it still would need the approval of the UC Academic Senate, which represents the faculty from all 10 campuses, and the Board of Regents.

Unclear status of the proposal

Some of the campus senates “were more or less fine with the regulation as written,” Horwitz wrote in an email, while others raised technical questions and concerns: How would the course requirement apply to UC applicants from private schools and out-of-state schools in states where it’s illegal to teach ethnic studies courses? Would the requirement create a financial burden on California high schools?

“And some campus Senates commented that the course criteria were more narrowly defined than the guidelines” in the state’s year-old ethnic studies model curriculum, Horwitz said. Declining to speak further on faculty members’ reservations, he said that he expects a revised proposal to return to the council before the end of the current academic year.

However, Christine Hong, an associate professor of critical race and ethnic studies at UC Santa Cruz and a member of the six-member faculty committee chosen to draft the criteria, said the proposal went through numerous revisions to incorporate suggestions of a 22-member workgroup. Comments from the faculty as a whole indicated “broad support,” she said.

Minutes from the December 2020 meeting of the Academic Council say that the ethnic studies requirement would advance UC’s “diversity, equity, and inclusion goals.”

Members emphasized that they didn’t want the advisory group to simply be made up of professors of ethnic studies, “but broadly inclusive of faculty working in relevant topic areas.” As it turned out, most workgroup members, appointed by a committee of the Academic Council, were faculty from ethnic studies departments, along with three student representatives.

Members of BOARS expressed concern about the proposal at their October 2021 meeting. According to minutes, “Several found some of the language to be inaccessible, even though it is standard in the discipline. Others found the tone of the proposal to be problematic.” UC will be creating course criteria without the benefit of standards, as there are with Common Core and the Next Generation Science Standards. As a result, “External political and social pressures increase the risk for misunderstandings.”

At their next meeting, a majority of BOARS approved the ethnic studies proposal. After five months, the minutes of the meeting haven’t been posted, and members have been asked not to discuss the proposal, one member told EdSource.

Meanwhile, strong opposition appears to be growing from within and outside UC. Much of it echoes opposition in the summer of 2019 to the original draft of the state’s ethnic studies model curriculum, which included language similar to the UC proposal in explaining ethnic study’s goals and benefits. That draft elicited 20,000 comments, pro and con, from organized campaigns by advocacy groups, including some in the Jewish community who protested that it included Jewish stereotypes, took the side of Palestinians in the conflict with Israel and supported the movement to boycott Israel as a colonial power.

Members of the State Board of Education and State Superintendent of Public Instruction Tony Thurmond called for a substantial rewrite.

“A model curriculum should be accurate, free of bias, appropriate for all learners in our diverse state, and align with Governor Newsom’s vision of a California for all. The current draft model curriculum falls short and needs to be substantially redesigned,” state board President Linda Darling-Hammond said in a statement at the time.

Guidelines and values in the state’s final draft include “critique empire-building in history and its relationship to white supremacy, racism and other forms of power and oppression” and “challenge racist, bigoted, discriminatory, imperialist/colonial beliefs and practices on multiple levels.”

But those elements are surrounded by language reflecting broader, mostly uncontroversial objectives, such as strengthening empathy and understanding among diverse student groups and building interpersonal communication. The final draft also stresses the need for students to seek multiple perspectives and do objective research. School districts can pick and choose from the fruit salad of goals and values under the state’s model.

The high school ethnic studies teachers and college ethnic studies professors who served as advisers or writers of the state’s first draft disavowed the final version of the model curriculum for diluting the vision and academic discipline of ethnic studies. They formed an alternative, the Liberated Ethnic Studies Model Curriculum Consortium, which encourages school districts to adopt the unvarnished first draft as their ethnic studies curriculum. Tricia Gallagher-Geurtsen, lecturer in education studies at UC San Diego and a lead writer of the Liberated Ethnic Studies curriculum, is another writer of the UC proposal.

Salinas, Castro Valley and Hayward are among districts that have contracted with advocates of the liberated philosophy to help write their ethnic studies curriculum. If UC’s proposal is adopted, they’ll be fine. Dozens of other school districts that have already adopted their own ethnic studies curriculums might have to recast or rewrite them, depending on the final wording, if it moves forward.

Bill Honig, a former state superintendent who helped draft a statement last fall calling for common ground on ethnic studies between deniers of racism and the liberated ethnic studies approach, said the Academic Council was wise to send the draft proposal back to BOARS.

“UC is getting out of its lane when it defines in specific ways how ethnic studies must be taught. It does not do this in other academic areas,” he said. “It should respect the K-12 system, which spent more than a year trying to resolve this issue. It should not usurp its authority.”

But Hong, a member of the writing committee that drafted the course criteria, said that BOARS asked members of the faculty from across the UC system to create criteria for courses true to the mission of ethnic studies and they acted in good faith.

“Ethnic studies has always required courage and struggle. UC is at a juncture where it stands to be on the right side of history by adopting an overdue requirement that at long last centers the perspectives and experiences of communities of color in this majority-minority state.”