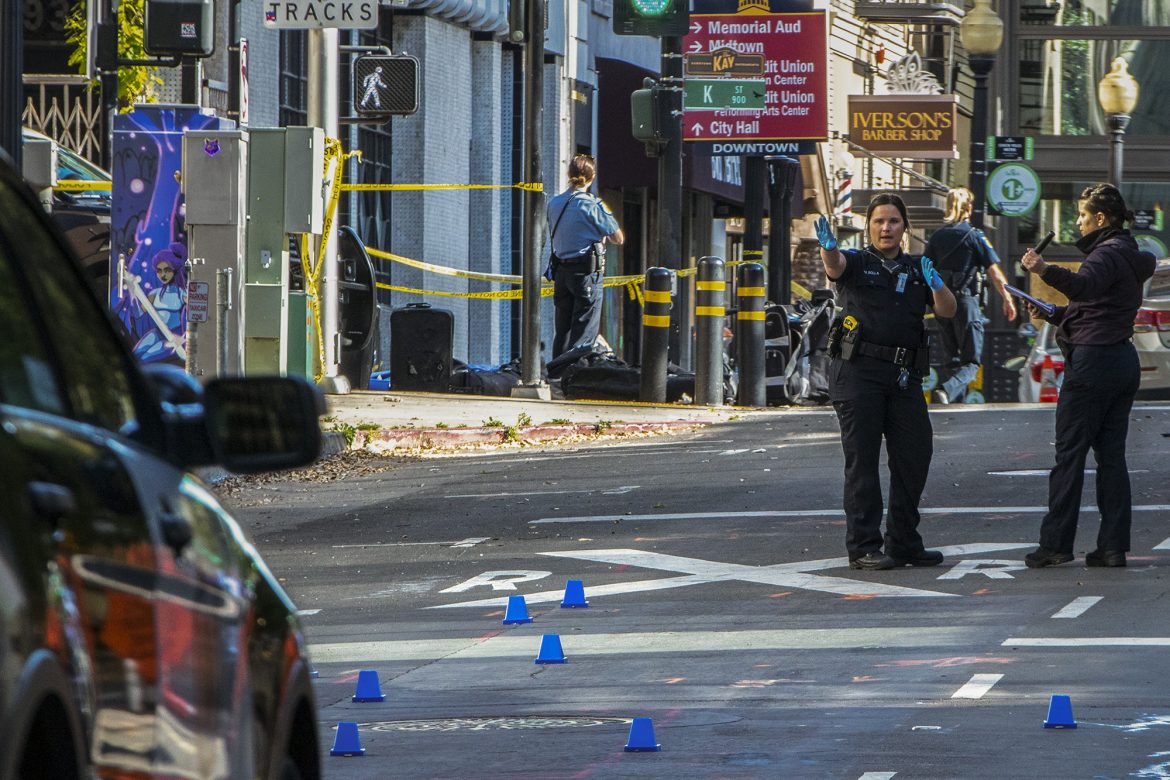 Sacramento Police investigate the crime scene of an early morning mass shooting in downtown Sacramento on April 3, 2022. At least six people were killed and 12 injured, according to Police Chief Kathy Lester. Photo by Rahul Lal/Sipa USA

A suspect in connection with the shooting deaths of six people in downtown Sacramento was released from prison less than halfway through his 10-year sentence because of credits earned behind bars, handing Assembly Republicans an opportunity to decry the state’s recent wave of criminal justice reforms.

Their criticisms after the shootings are a common refrain among conservatives and members of law enforcement, pushing back against the last decade of criminal justice reforms in California.

Inmates released early “are going to be violent when they get out, and that’s what we’ve seen here,” Sacramento County Sheriff Scott Jones recently told Fox News Digital.

Whether the voting public accepts that narrative will be reflected in the closest watched election this year.

The race for California attorney general embodies the most significant divide in criminal justice today: Those who believe long prison and jail sentences deter crime, and those who insist that they cause more harm than they prevent.

Crime was up statewide in 2020, the last year for which statewide statistics were published. Homicides increased 31% between 2019 and 2020.

The April 3 shooting just a few blocks from the state Capitol killed six people and wounded another 12, including two of the men arrested in connection with the violence – brothers Smiley and Dandrae Martin. A third man was arrested two days after the shootings. All three face charges related to possession of firearms.

On Tuesday, Sacramento police said they are looking for 27-year-old Mtula Payton, and that they believe five shooters are involved, including the Martin brothers.

“At this time, evidence indicates that Payton, Smiley Martin and Dandrae Martin were among the shooters,” Sacramento police said in a press release.

Smiley Martin, 27, was released from prison in February. Schubert’s office had agreed to a plea bargain in which Martin would be classified as a nonviolent offender, despite his conviction on charges of beating his girlfriend, CalMatters reported.

That nonviolent offender status made him eligible to earn credits toward early release.

Republicans running on a recall ballot against Gov. Gavin Newsom last year made measures to reduce prison sentences and rising crime statistics a focal point of their campaigns.

Challenging that narrative are progressives, who point to statistics showing that reform-minded measures like Proposition 47, which reclassified some drug and property offenses from felonies to misdemeanors, reduced racial disparities in arrests.

Research used by the U.S. Department of Justice found that the certainty of being caught, not the length of a sentence, is the most effective deterrent to crime.

“I’m not surprised that the conservative forces in criminal justice are continuing to look for things to blame,” said Cristine Soto DeBerry, executive director of the Prosecutors Alliance of California, a progressive coalition of recently elected district attorneys.

“They have been pushing for more punishment since their existence. It benefits their members when it’s a police union, it benefits their ability to shift blame when they’re running a (prosecutor’s) office. But the reality is, it doesn’t solve the problem.”

Attorney General Rob Bonta, the sitting incumbent appointed by Newsom in April 2021, is part of the last decade’s wave of reform Democrats which supports legislation lessening penalties for smaller crimes and creating more opportunities for inmates to earn early releases.

At the opposite pole is Anne Marie Schubert, the Sacramento County district attorney running against him as an independent in the June 7 primary.

She hasn’t commented on the shootings because her office is prosecuting the suspects. But the press conference among Assembly Republicans last week repeated the same call for longer sentences and fewer opportunities for early release that Schubert has enunciated in press releases since announcing her run for office.

Emoji-laden subject lines in a series of Schubert campaign emails from earlier this year spell out her position.

Somewhere between Bonta and Schubert is Nathan Hochman of Los Angeles, who is running as a Republican. Hochman told a CalMatters panel last week that, when he worked as a federal prosecutor, he felt mandatory minimum sentences for crack cocaine were too harsh compared to sentences for powdered cocaine. Yet he believes Californians are much more conservative on criminal justice issues than their statewide elected officials.

“This isn’t just a Republican level issue, it’s a Californian issue,” Hochman said. “But I believe in this respect that the Republican party’s in lockstep with the majority of Californians in viewing this as a serious problem and looking for serious solutions to solve it.”

Practically, the election of an attorney general falls along party lines, said Claremont McKenna College political scientist Andrew Sinclair. Schubert winning as an independent or Hochman as a Republican would require them to peel off a significant segment of Democrats on a single, salient issue.

Crime, Sinclair said, is likely not that issue.

“There’ll be a lot of people who express some amount of frustration about how things are going on crime, on homelessness, on cost of living, those kinds of issues, but it would be hard to turn that actually into a large number of votes for an alternative candidate,” Sinclair said. “It may be a different story if you had two high-profile Democrats running for the office.”

Historically, Sinclair said, attitudes on crime are reflected in the death penalty debate. An analysis of 595 public opinion surveys convinced University of North Carolina political scientist Frank Baumgartner that “Americans support capital punishment less than they have at any time since the modern death penalty system was established in 1976.”

In California, the numbers may look confusing at first. In a paper Sinclair co-authored last year, polling found that 70% of respondents supported the death penalty either for most or all types of murder, or only for the most aggravated murders.

But just 51% of respondents said they disapproved of Newsom’s death penalty moratorium.

“You may see a lot of bad polling numbers for the Democrats on crime,” Sinclair said, “but when it gets down to policy implementation, (voters) may slide back to their own party.”

The election of an attorney general is just the most visible statewide representation of the policy split among members of law enforcement. Two local recall elections have generated just as many headlines, and when Schubert disparaged “soft-on-crime” policies in campaign emails, she didn’t single out Bonta – she went for two fellow district attorneys.

In a Feb. 21 press release titled “Why I Support the Chesa Boudin Recall,” Schubert wrote that she toured the Tenderloin in San Francisco, which she described as “like the scene of an apocalyptic movie.”

“This is the California created by prosecutors like Chesa Boudin in San Francisco who put radical and impractical ideology before safety and the rule of law,” she wrote.

The implication is clear: Crime is worse in places that voted for progressives as prosecutors. But that assertion is belied by the statistics – Schubert’s own county suffered a 50% increase in gun homicides in 2020 and 2021, compared to 2018 and 2019, exceeding the 31% spike statewide from 2019 to 2020.

Los Angeles and San Francisco counties also saw more homicides than they did before the pandemic, but at a much lower rate than Sacramento County.