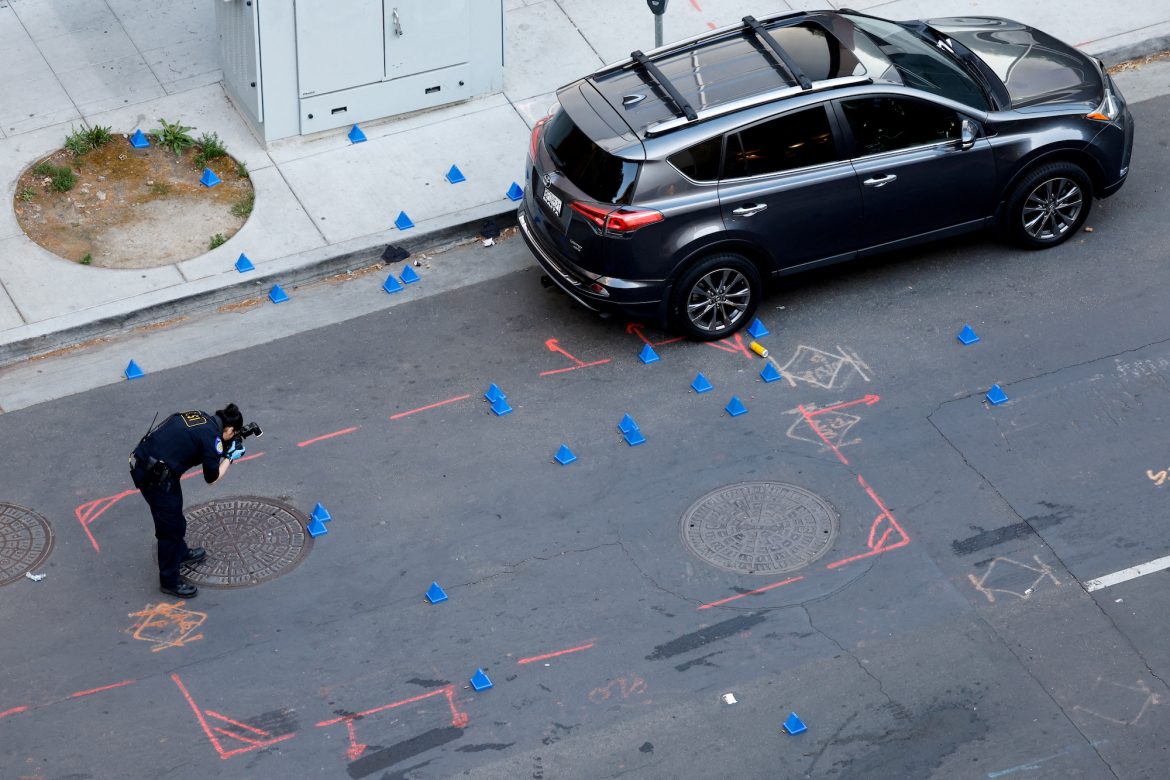 A police evidence technician photographs the crime scene after an early-morning shooting in a stretch of downtown near the Golden 1 Center arena in Sacramento, California, U.S. April 3, 2022. REUTERS/Fred Greaves TPX IMAGES OF THE DAY

Just blocks from the state Capitol where legislators have crafted arguably the toughest gun control laws in the country, at least two shooters early Sunday morning killed at least six people and injured another 12 in Sacramento’s worst mass shooting in history. It’s sure to intensify questions about what elected officials can do to curb rising gun violence and crime before concerned Californians vote in the June 7 primary.

Gov. Gavin Newsom, who’s abroad on a family vacation, said the country must end its “scourge of gun violence.” Sacramento Mayor Darrell Steinberg called for tougher laws on assault rifles, though it wasn’t immediately clear what types of guns the shooters used.

Attorney General Rob Bonta — a progressive Democrat who’s gearing up for one of the most closely watched primary races against tough-on-crime independent Sacramento County District Attorney Anne Marie Schubert and Republicans Nathan Hochman and Eric Early — emphasized that he’s in the business of keeping Californians safe.

Newsom, Bonta and Democratic lawmakers recently introduced a package of gun control bills. But those efforts may not be enough to comfort Californians still reeling from mass shootings last month at a Sacramento church and last year at a San Jose railyard, or the houses of worship that recently received state funds to install bulletproof windows and hire armed guards.

And there’s no clear consensus on the best way to address gun violence. While some are calling for a beefed-up law enforcement presence, others, like Sacramento City Councilmember Katie Valenzuela, who represents the downtown district where the mass shooting occurred, said that wouldn’t necessarily stop the violence.

Sam Paredes, who runs Gun Owners of California, told the Sacramento Bee that lawmakers’ “knee-jerk reaction is to go after guns,” when the real issues driving gun violence may be mental, economic or medical.

It’s a debate playing out across the state and one sure to heighten in coming months, with San Francisco District Attorney Chesa Boudin facing a recall election on June 7 and discontented Los Angeles County voters collecting signatures to oust District Attorney George Gascón. Against that backdrop, the progressive prosecutors’ two regions are also grappling with the best way to handle spiraling drug addiction and homelessness.