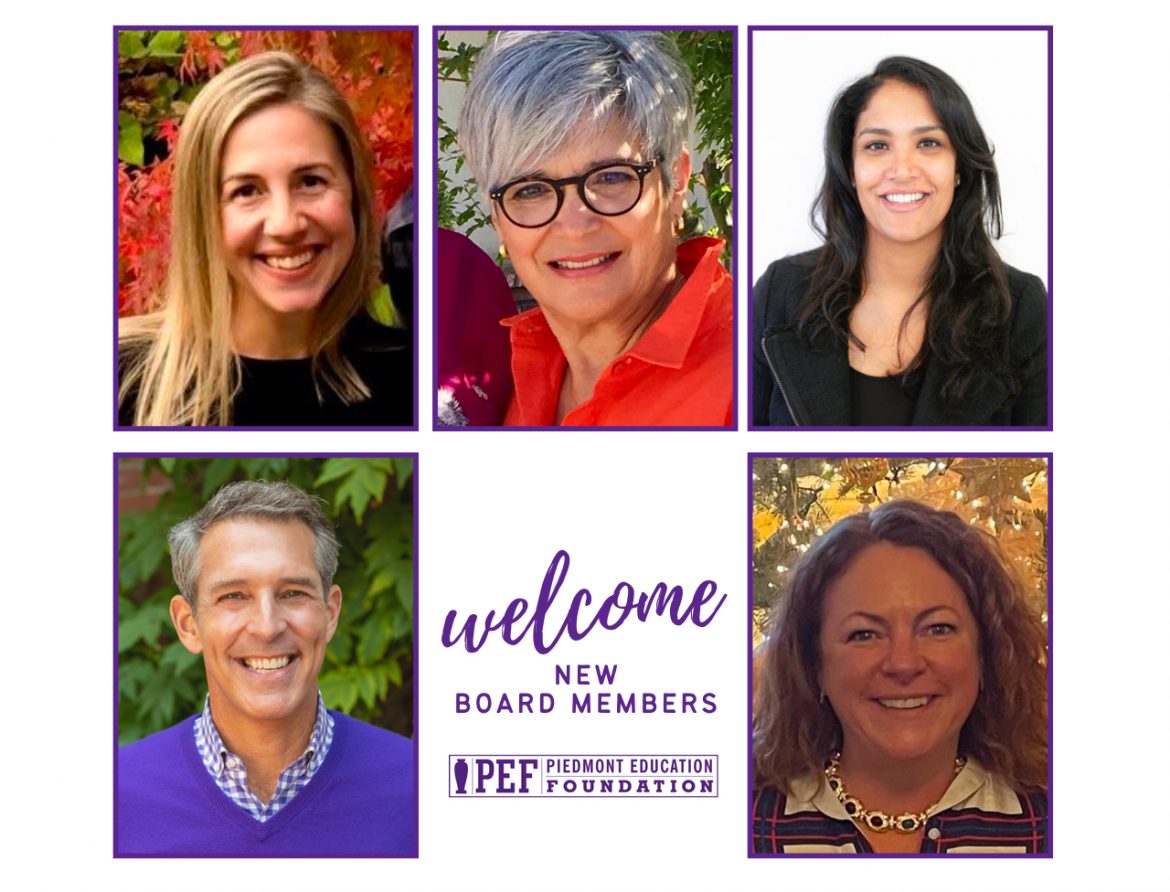 As Piedmont Education Foundation (PEF) winds down a record-breaking year for fundraising and community engagement, it is looking forward to the future. At the March 16 meeting, the PEF Board of Directors unanimously voted to approve the nominations of Rita Fabi, Patricia Keller, Ruchi Medhekar, Chad Olcott, and Bridget Schreiber.

“We had an intensive round of applications, interviews, and vetting for next year’s board,” said Governance Committee Chair Rebecca Thornborrow. “We are thrilled to be able to accept this impressive group of school supporters on the PEF Board.”

Rita Fabi, in addition to being a dedicated Giving Campaign representative for Havens, is an online safety expert. Patricia Keller, a 45-year Piedmont resident and retired dental hygienist, is an avid Beach Revue volunteer. Ruchi Medhekar was last year’s Beach Parent’s Organization president and has a Ph.D. in Microbiology, Immunology, and Molecular Genetics. Chad Olcott, once named PEF’s “Person of the Decade” for his considerable volunteerism and contributions, is a realtor and part-owner of Mulberry’s Market. Bridget Schreiber is a finance and investment professional who moved to Piedmont because she believes community involvement is an essential part of a public education. “Since living in Piedmont, I have met many PEF Board members and have been incredibly impressed with the work they do and the passion they have for helping our schools. I share that passion,” Schreiber said.

PEF Board terms are two years and members may be asked to renew twice, for a total of six years of service. Reaching their term limits in June are Eileen Ruby, the winner of this year’s Art Hecht award and champion of the PEF Endowment, and Mary Lou Righellis, whose board service has been highlighted by her dedication to the larger Piedmont community.

The PEF Executive Committee leadership team was also confirmed at the March 16 meeting. Rick Smith will be taking on the role of Treasurer, Cortney Allen will step in as Secretary, and Tonya Antonucci and Dana Lung will serve as Vice Chairs. After three years of Giving Campaign leadership and service as Vice Chair, Amelie Kappes was unanimously elected to the position of Board Chair for 2022-23. Current Board Chair Nicki Gilbert, who has provided strong and consistent leadership to PEF for the past two years, will continue to serve on the PEF Board and Executive Committee.

About PEF
Piedmont Education Foundation is a 501(c)3 nonprofit organization whose mission is to provide sustained financial support to Piedmont schools through fundraising and community engagement. Led by a 23-member volunteer board and supported by a professional office staff, PEF has affirmed a commitment to working together for a more inclusive Piedmont. For more information, visit PiedmontEdFoundation.org.