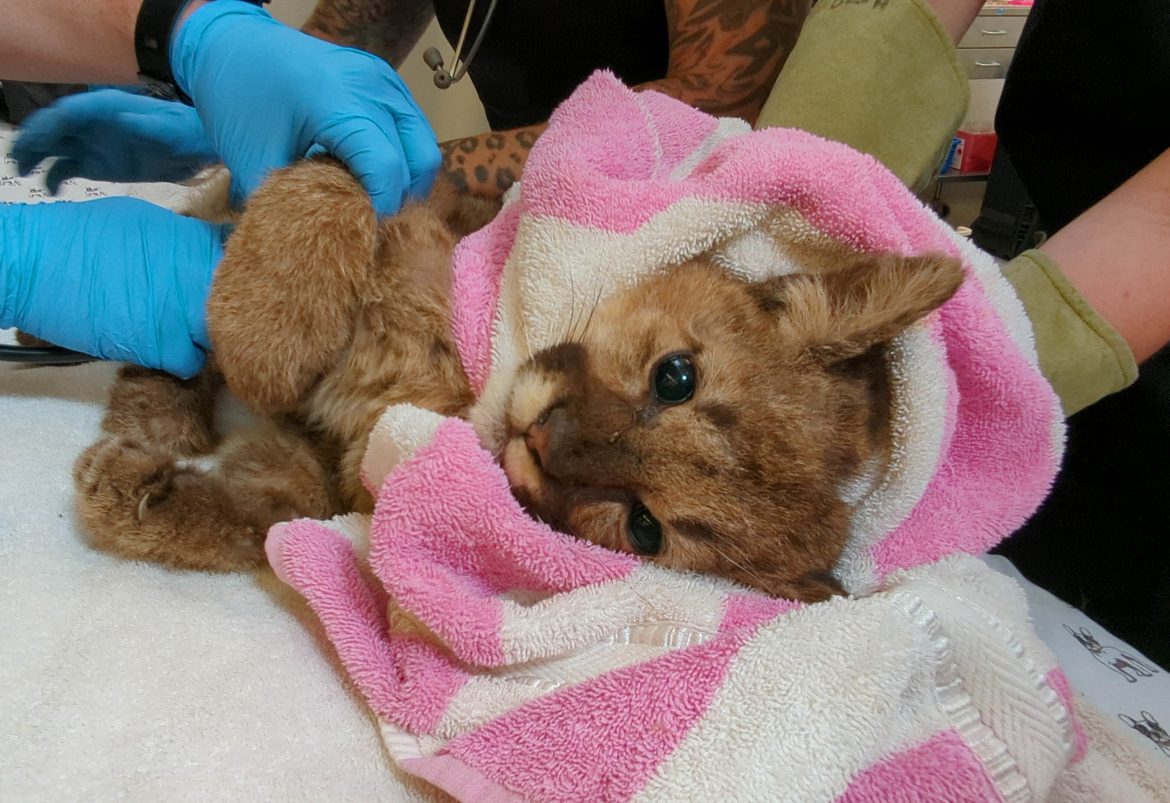 Members of the Oakland Zoo medical team work on a four-to-five-month-old female Mountain Lion cub that was located and retrieved by a MidPen wildlife biologist, a ranger and two wildlife biologists from California Department of Fish and Wildlife (CDFW), Garrett Allen and Megan Senour, on April 11, 2022. The cub was then brought to the Oakland Zoo where the veterinary team was standing by to receive her and administer immediate medical treatment. (CDFW via Bay City News)

An emaciated, orphaned mountain lion cub is now being cared for at the Oakland Zoo following her capture in the “nick of time” on Sunday, zoo officials said Monday.

A hiker first spotted the cub, named “Rose” by Oakland Zoo caretakers, on April 5 in San Mateo County. She eluded capture for five days and when she arrived at the zoo at about 3 p.m. on Sunday she weighed only 8.8. pounds. She is four to five months old and should weigh about 30 pounds, according to zoo officials.

“It appears she hasn’t eaten in weeks,” said Dr. Alex Herman, vice president of veterinary services at the Oakland Zoo. “She is excruciatingly thin. To survive, her body resorted to consuming its own muscle mass.”

Rose was also suffering from extreme dehydration, and her temperature was so low it couldn’t even be read, Herman said.

“But she survived her first night, which was critical. We can already tell she has a feisty spirit and an obvious will to live, and we’re thankful for that.”

Rose was first spotted in Thornewood Open Space Preserve in the Santa Cruz Mountains, part of the Midpeninsula Regional Open Space District. Midpen wildlife biologists got in touch with the California Department of Fish and Wildlife to rescue the cub. They set up cameras and made daily patrols.

Cameras captured images of Rose on Friday, but she remained unseen when biologists got to the area.

Rose is now receiving care 24 hours a day. Besides starving and suffering from dehydration, she also was covered with fleas and ticks. The cub is getting blood tests daily to monitor her. Other vitals are being monitored along with her weight. She has a low red blood cell count, according to the Oakland Zoo. Dr. Ryan Sadler of the zoo said she may get a blood transfusion if her red blood cell count stays low. Blood would come from one of the zoo’s fully grown healthy adults who is a permanent resident.

Vets are guardedly optimistic that Rose will recover. She is getting fluids intravenously and is being fed formula through a bottle several times a day. She also ate some meat Monday morning, a sign she may be gaining strength. Biologists are leaving up the cameras in Midpen to see if any other mountain lions or cubs are in the area.

“We appreciate the hiker and the team at Midpeninsula Regional Open Space District who alerted us to the mountain lion cub and its condition,” CDFW biologist Garrett Allen said. “The Santa Cruz Mountains provide good habitat for mountain lions, but it’s rare to see a mountain lion because they’re elusive creatures.”

Allen advises people not to approach mountain lions if they see one.

“Adult animals, when out hunting prey, may leave offspring somewhere safe for up to days at a time,” he said. “Seeing a young animal by itself does not indicate that it is an orphan and intervention is appropriate.”

Mountain lions usually are not a threat to people. But if it is a public safety issue, it should be reported to local law enforcement right away.

General sightings can be reported at https://apps.wildlife.ca.gov/wir/incident/create.

If Rose fully recovers, she will have to stay in captivity, zoo officials said. Cubs are usually with their mothers for up to 24 months learning hunting and survival skills. Rose will likely live at another Association of Zoos and Aquariums (AZA) accredited zoo.