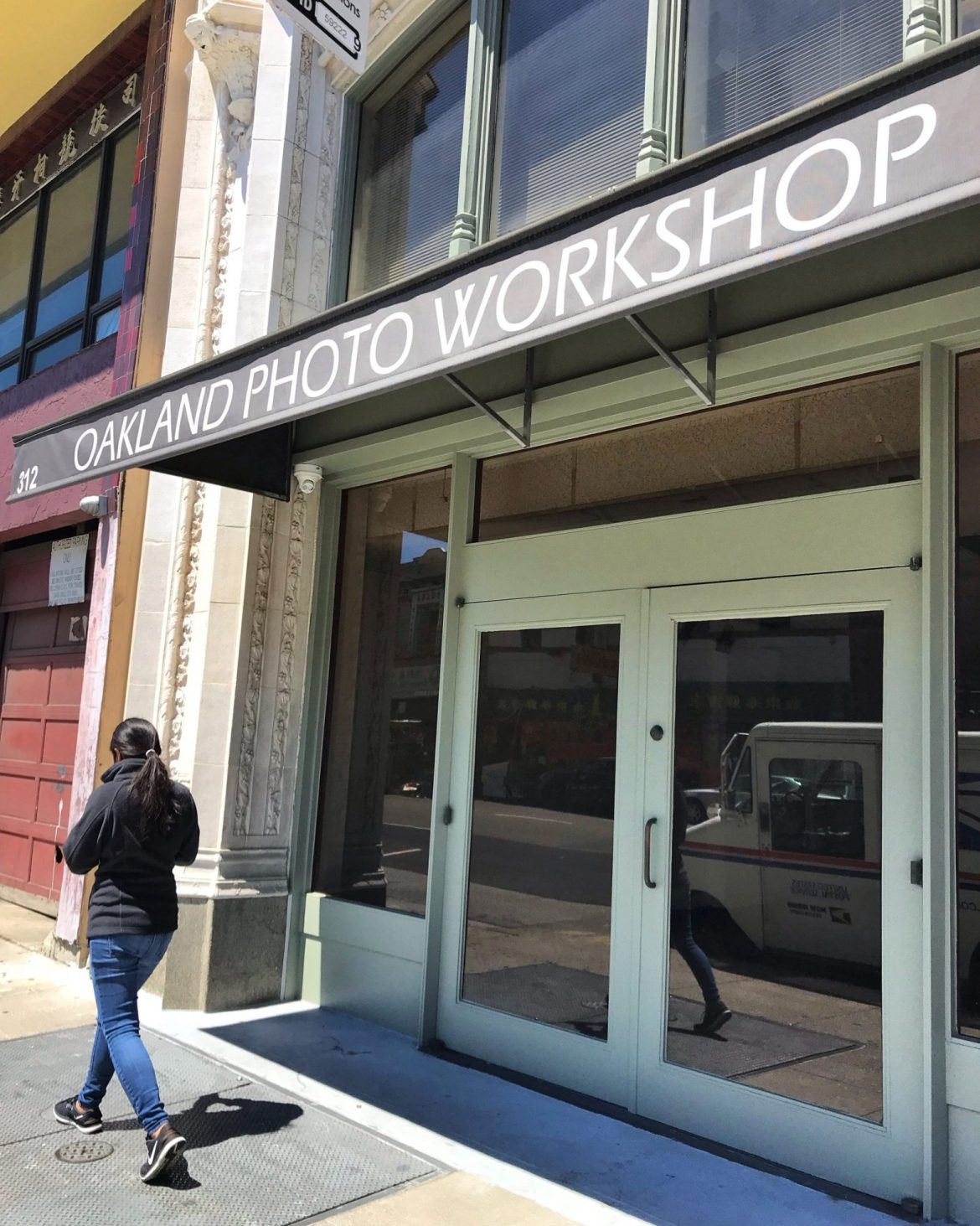 A panoramic photo shows the East Bay Photo Collective's gallery space Oakland Photo Workshop, which is located in the Asian Resource Center in Chinatown, during its "Food With a Twist" exhibition. (Photo courtesy Kathy Walton)

Rohan DaCosta can admit that photography wasn’t his first love. The Chicago native had always known he was a creative person, a “jack-of-all-trades,” with a preference for poetry. But it was a relocation to the Bay Area, a bona fide petri dish of artistic proclivities, that rekindled the initial flirtation he had with the medium in a high school photojournalism class. Cameras and couplets, turns out, have more in common than you’d think.

“It’s all storytelling, or it all can be,” he says. “Even as a writer or as a poet, I was a photographer as a poet. Poetry will offer you snapshots of a feeling; the two naturally, for me, bleed into each other.”

If the picture-to-word currency exchange still stands, DaCosta will espouse a book’s length with his curation of the East Bay Photo Collective’s latest gallery show, “An Eye for Fashion.”

The show comprises photography work from local artists, as well as those from places as disparate as Germany, and DaCosta says many of the photographers had never seen their work tangibly up on a wall before. He also made some modifications to the gallery space, such as painting the walls red and forgoing frames, but the EBPCo executive directors were game; “they wanted to take some chances and explore how they can engage the community,” he says.

Co-executive directors (and partners) Anita Gay and Vince Donovan founded the East Bay Photo Collective in 2017 after sensing a void in community spaces for photography. The Bay Area, as you may have noticed, is a photogenic place full of striking subjects, and a long history to boot; one of the region’s first photographer collectives, called Group f/64, was founded in 1932.

Both have been involved in photography in and out of the Bay Area for decades. Donovan, who calls himself a “photo mad-scientist,” cofounded Photobooth SF in 2011 with fellow photographer Michael Shindler, a studio and gallery that focused on tintype photography, a quick-exposure method developed in 1853 that peaked during the Civil War years.

Although Photobooth SF has since closed, Donovan says it was the first West Coast tintype studio in over 100 years. Gay has lived in the Bay Area for 20 years, and worked in photography retail nearly as long; she credits Looking Glass Photo in Berkeley for paving the path that would lead to founding her own photography community.

“There’s subcultures within the subcultures,” Gay says. “There’s the analog group, there’s the digital group, there’s everything in between. Most of the photographers I’ve met and crossed paths with are very interested in connecting across those subcultures. And that’s kind of what we are as an organization. We try to foster that.”

The closing of other community photographer spaces, like Rainbow Express Studio, was a major catalyst in the founding of EBPCo. As photography methods and technology continue to evolve, older styles and craft could be swept away. The collective’s goal is to honor that past while exploring the future, and give all the emerging shutterbugs the means and support to do so.

While calling it a collective is a bit of a misnomer — it’s a nonprofit — they’ve connected with hundreds of photophiles over the last five years. Weirdly enough, the pandemic catalyzed a number of new and successful endeavors for EBPCo, including regular community photo walks, online talks with renowned photographers and a physical gallery.

The space, called the Oakland Photo Workshop, is located in the Asian Resource Center in Oakland’s Chinatown, and has hosted three shows so far since EBPCo acquired it in 2020, with “An Eye for Fashion” being the third. DaCosta has a handful of shows planned for the rest of the year, but those are currently under wraps.

One of the photographers featured in “An Eye for Fashion,” Oakland resident Katie Lovecraft, fell in love with photography in high school in her hometown of Louisville, Kentucky. She developed her colorful, graphic style for commercial fashion and beauty photography after attending photo school and moving out West, crediting Oakland’s collaborative legacy with pushing her to develop her craft. Before DaCosta’s introduction, she hadn’t known about EBPCo.

“To me ‘An Eye for Fashion’ feels like a community dialogue about what kind of energy we feel when we shoot the fashion imagery we want to see around us,” she says over email. “My photo is a favorite from a shoot for Diablo Magazine’s spring 2019 fashion editorial, so I was happy that a photo from a local Bay Area magazine was requested for this community show. It felt right.”

“An Eye for Fashion” is on display through May 21 at the Oakland Photo Workshop at 312 Eighth St., Oakland. The gallery is open noon-6 p.m. Fridays-Sundays. For more information, visit https://www.ebpco.org/an-eye-for-fashion.