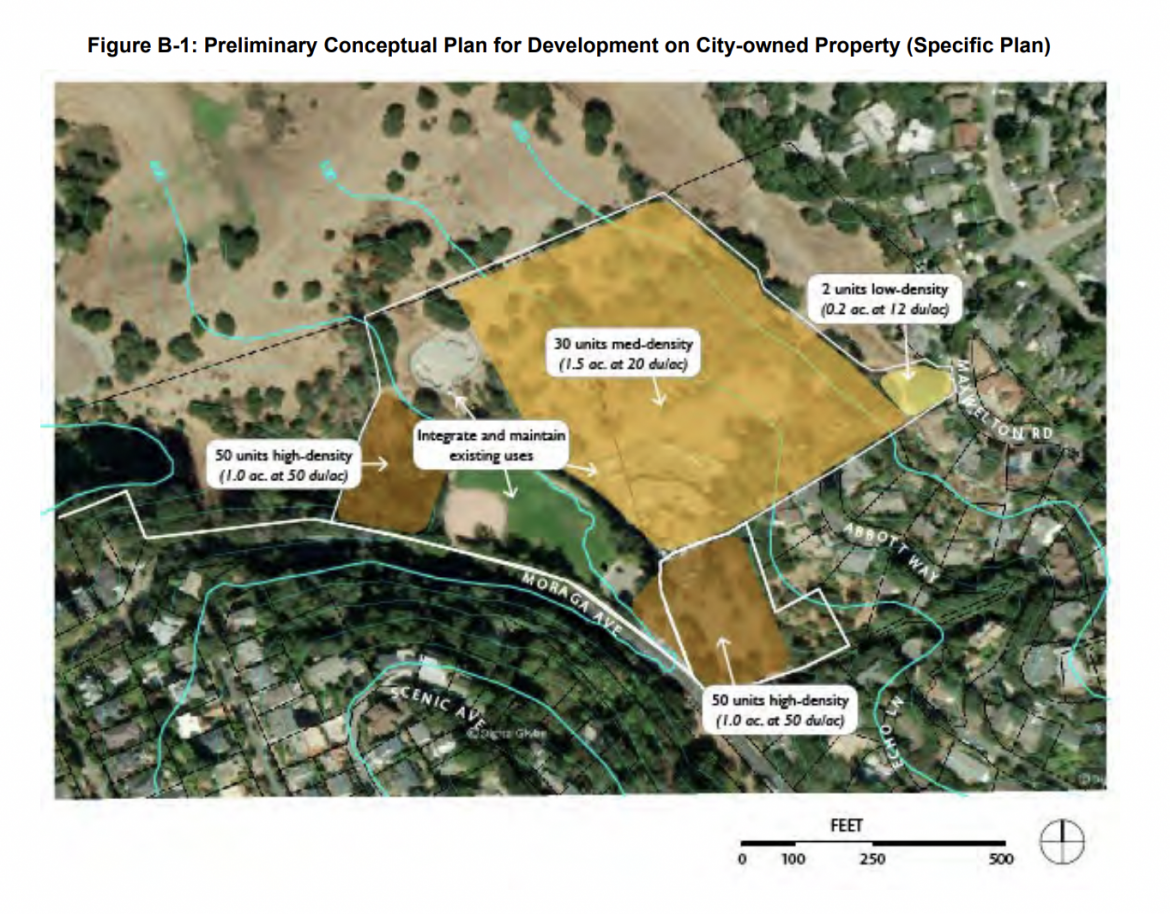 An image from the draft Housing Element report that shows city property that could be developed for affordable housing.

From a City of Piedmont press release on April 12:

The 2023-2031 Draft Housing Element, which is a chapter of the General Plan, considers the following topics: new land uses, housing types, building types, heights, residential densities, code changes, and housing programs, such as subsidies and incentives, in Piedmont. The Draft Housing Element meets the state-mandated goal of accommodating 587 new housing units by 2031, as well as affirmatively furthering fair housing in Piedmont.

“This document (Draft Housing Element) is foundational for us as a City, in regard to how we look forward to build our community for the next several years,” noted Mayor Teddy Gray King at the March 24 community workshop which included a report on the progress of work to prepare the Draft Housing Element. “Our Housing Element holds the key to many issues including our approaches to housing, greenhouse gas emissions reduction, transportation, educational opportunity, and others. Housing is fundamental to the health and well-being of any community, including Piedmont.”

The Draft Housing Element will be the subject of the upcoming Piedmont Housing Advisory Committee meeting on April 19, 2022, and the subject of a special Planning Commission public hearing on May 12, 2022. Both meetings will begin at 5:30 pm. A City Council public hearing is tentatively scheduled for June 2022.

Planning Commission and Housing Advisory Committee Chair Rani Batra encourages the Piedmont community to participate in upcoming meetings, stating “We can all look forward to seeing the public review draft of the Housing Element and then being able to engage together on it at three different public forums this spring. We really appreciate hearing your voices. I would encourage you to reach out more broadly within the community and ask people, who maybe haven’t looked up and taken a peek at what’s going on in housing, to also get involved. It is going to take all of us to make room for more housing in Piedmont.”

All members of the Piedmont community are encouraged to review the Draft Housing Element and provide comments to City decision-makers. Comments can be made by any of the following methods:

The Piedmont Housing Puzzle is a growth simulation tool developed by City staff, hosted on Balancing Act software. This online and interactive planning tool gives Piedmont community members the chance to imagine where they would locate 587 new housing units.

May 2023: Deadline for adoption of the final draft of the updated Housing Element, date amended due to recent state law requiring additional review and longer comment periods.