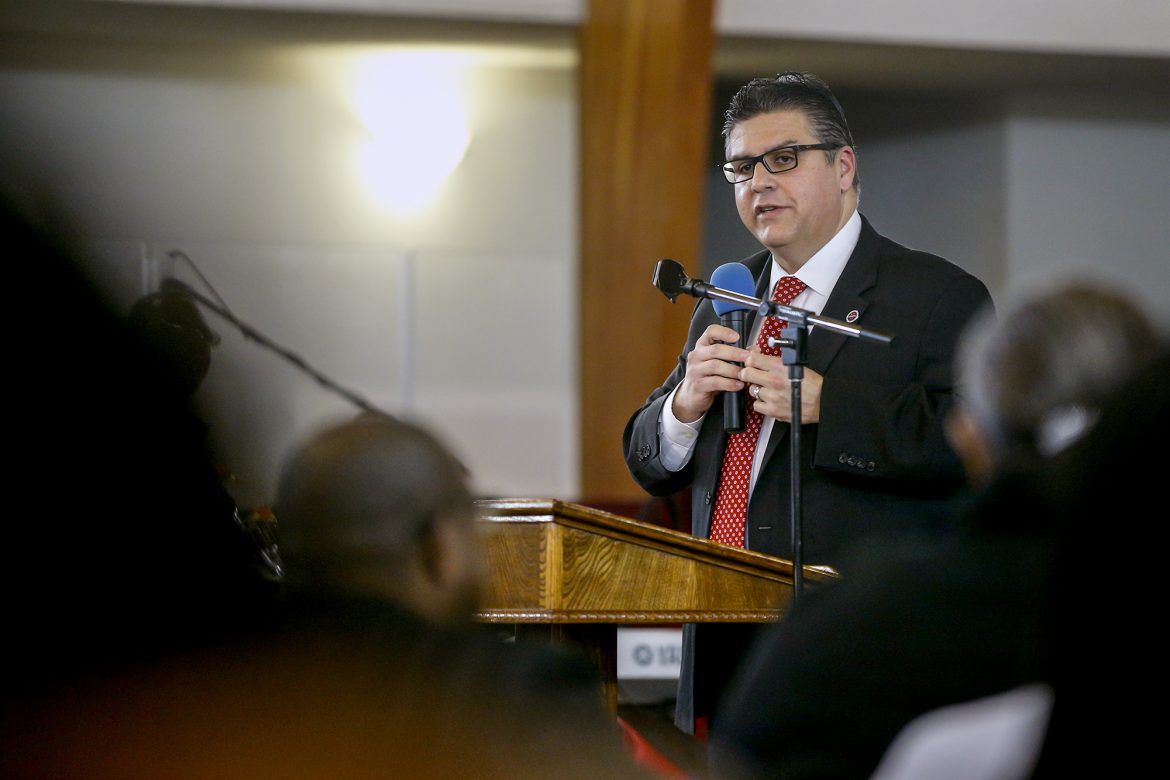 California State University’s policies around sexual harassment and discrimination have come under intense scrutiny this spring, after a bombshell USA Today investigation found that then-Chancellor Joseph Castro had mishandled complaints against a senior administrator while he was president of Fresno State.

The ensuing scandal led to Castro’s resignation in February and caused an outcry among students and university employees, including some at Fresno State who say the campus office charged with responding to harassment allegations has long been understaffed.

Castro’s ouster has focused attention on Title IX, the federal law that prohibits sex discrimination in schools. But how exactly does Title IX work? And what’s next for Cal State? As the university launches its own investigations, the Cal Matters College Journalism Network pulled together answers to questions we’ve heard from our readers.

What exactly is Title IX, anyway?

The 50-year-old civil rights law bans discrimination based on sex at schools, colleges and other agencies that receive funding from the U.S. Department of Education. It covers everything from recruitment and admissions to counseling, financial assistance and athletics.

Colleges must also specifically protect students and employees from sexual harassment and violence. They’re required to have at least one staff member focused on enforcing Title IX. Anyone who thinks they have experienced sexual misconduct on campus can file a Title IX complaint with their university. And if they believe the university has mishandled their case, they can file a discrimination complaint against the school  with the Department of Education’s Office of Civil Rights.

Other laws, including Title VII of the federal Civil Rights Act and California’s Fair Employment and Housing Act, also bar sexually harassing workers on California campuses or retaliating against them when they file discrimination complaints.

What did critics say that former chancellor Castro did wrong?

The controversy revolves around a series of harassment complaints filed against Fresno State’s then-Vice President of Student Affairs Frank Lamas over six years, alleging that he stared at women’s breasts, made sexist comments, and retaliated against employees who objected. Castro knew of at least seven of the complaints, yet failed to formally discipline Lamas, USA Today reported.

Criticism of Castro fell along three lines: First, he took little action until 2019, when a woman on Lamas’s staff filed a formal Title IX complaint saying Lamas had touched her without her consent and implied he would support her promotion in exchange for sexual favors. Castro also endorsed Lamas for a lifetime achievement award and a job as president of CSU San Marcos even after he knew about the allegations against him. And when Castro did finally take action, instead of firing Lamas, he reached a settlement that paid Lamas $260,000 and promised him a letter of recommendation in exchange for leaving the university.

Many Cal State students and staff said the incident caused them to lose trust in university administrators to protect them.

“It just makes it seem like (Fresno State) doesn’t care,” said Xitllali Loya, a former Fresno State student who organized a campus protest in the wake of the revelations.

“Somehow, we had a senior executive for six years sexually harassing people on on one of our major campuses, even to the point where he’s sexually harassing a student for two years, and nothing happened,” Cal State trustee Jack McGrory said at the board’s March meeting. “The system just completely failed.”

Ideally, how should cases like that of Frank Lamas be handled?

Castro told USA Today that while he ordered sensitivity training for Lamas, he couldn’t take further action until a formal Title IX complaint was filed in 2019. But other Cal State presidents interviewed by CalMatters in February said Castro should have acted sooner.

“We have a duty to report as soon as we hear something that touches on gender-based harassment or abuse reported to our Title IX office,” Cal State East Bay President Cathy Sandeen told CalMatters reporter Mikhail Zinshteyn.

Department of Education rules say that colleges must respond to allegations of sexual harassment when a campus official who “has authority to institute corrective measures” has “actual knowledge” that harassment may have taken place. That knowledge, the rules say, could come via “an oral report of sexual harassment by a complainant or anyone else, a written report, through personal observation, through a newspaper article, through an anonymous report, or through various other means.”

A rule passed during the Trump Administration bars colleges from disciplining someone for a Title IX violation until a formal complaint has been filed. That rule wasn’t in place when Fresno State received the reports about Lamas, however.

Colleges can take a number of steps even when a student or employee doesn’t want to file a formal complaint, said S. Daniel Carter, president of SAFE Campuses LLC, which advises schools on Title IX compliance. The school’s Title IX coordinator can file the formal complaint. Third-party witnesses can provide statements. When multiple people have accused the same person of sexual misconduct, a Title IX coordinator can inform the original person who complained that there have been other reports, and ask again if they want to come forward.

If there are widespread reports of harassment in a particular department, he said, the college can hold a training for the whole department with the goal of “​​sending a very clear message…that the institution does not tolerate discrimination and that complainants will be supported and protected from retaliation.”

“There’s not a single path to remedying sex discrimination,” said Carter. “But an institution cannot simply throw up their hands and say there’s nothing we can do.”

What are “retreat rights”?

“Retreat rights,” a clause in some administrators’ contracts that allows them to leave their post and return to a faculty position, are common throughout higher education. But the practice has come under scrutiny at Cal State after Castro told USA Today that fear of Lamas “retreating” to a faculty position was one of the reasons the university paid him to leave.

The university is conducting a review of its retreat rights policy, trustees announced last month. In the meantime, offer letters to new job candidates will specify that anyone found to have engaged in significant misconduct is not eligible for the perk.

It’s rare for administrators in a non-academic position like Lamas to have retreat rights, said John Pelissero, a senior scholar in government ethics at the Markkula Center for Applied Ethics at Santa Clara University — especially if, like Lamas, they weren’t part of the university’s faculty before.

When an administrator is dismissed, Pelissero said, “it would not be unusual for members of the university community to question why if this person wasn’t qualified, competent, to remain as an administrator, why you would get them another position in the university they didn’t previously hold.” Pelissero added that university leaders have an ethical responsibility to tell the department that’s being asked to award tenure the reasons why that administrator stepped down.

Castro, himself, negotiated retreat rights as chancellor, picking Cal Poly San Luis Obispo’s business school as the place where he wanted to teach. He hasn’t yet informed Cal State whether he intends to exercise those rights, said university spokesperson Mike Uhlenkamp.

Trustees have also temporarily suspended new admissions to Cal State’s executive transition program, which allows former administrators to spend a year preparing for a new job with the university. Under that program, Castro will earn about $400,000 to spend a year as an advisor to the board of trustees.

First, the university has commissioned an external review of how administrators responded to reports of Title IX violations at Fresno State, scheduled to be completed by the end of July. It will be conducted by Los Angeles-based employment attorney Mary Lee Wegner, who also led the 2019 investigation that finally found Lamas responsible for sexual harassment and creating an abusive work environment.

Cal State has also hired the law firm Cozen O’Connor to examine Title IX practices and policies across all 23 campuses and the chancellor’s office. It will include “review of closed Title IX complaints to identify that cases were handled appropriately and will also include interviews with students, faculty, staff, Title IX coordinators and administrators,” said Evelyn Nazario, the university’s vice chancellor for human resources.

Some state lawmakers have said that Cal State paying to investigate itself isn’t sufficient, and that the state should conduct its own, independent probe.

Assemblymember Jim Patterson, a Fresno Republican, plans to file a request for a state audit, a spokesperson said Thursday.

“There is widespread concern that this is not an isolated incident but that there are serious problems at CSU campuses throughout the state,” Patterson said in a statement to CalMatters. “An audit done by the nonpartisan, independent State Auditor will provide not only a public accounting of the issues at Fresno State, it will offer suggestions about how systemic changes can be made to prevent similar future issues.”

Huck, Shaikh, and Woock are fellows with the CalMatters College Journalism Network, a collaboration between CalMatters and student journalists from across California. Mello is the network’s editor. This story and other higher education coverage are supported by the College Futures Foundation.