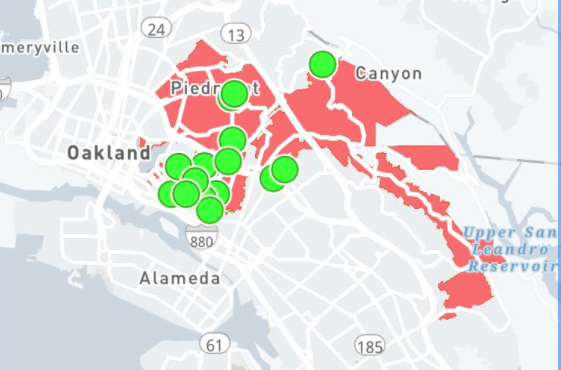 A widespread power outage across large parts of Piedmont and Oakland early Thursday evening impacted 32,000 PG&E customers at its height, the utility reported.

A PG&E spokesperson said the outage was first reported at 6:13 p.m. According to an outage map on PG&E’s website, the area affected were portions of Piedmont and a large section of the Oakland hills and neighborhoods located south of Lake Merritt.

The outages were bounded by Piedmont Avenue to the north, Moraga Avenue and state Highway 13 to the east, Joaquin Miller Road and Skyline Boulevard in the Oakland hills east of Interstate 580, Lincoln Avenue to the south and MacArthur Boulevard to the west, in addition to the area south of Lake Merritt, bounded roughly by Fruitvale Avenue and International, MacArthur and Park boulevards. Several streets around the perimeter of Lake Merritt were also without electricity.

Power service was restored to most customers around 7:18 p.m.

Power to 4,200 remaining affected customers was restored at 9:06 p.m., according to a PG&E spokesperson.

The cause of the outage is under investigation.

One thought on “Thursday power outage hit 32,000 at its peak”