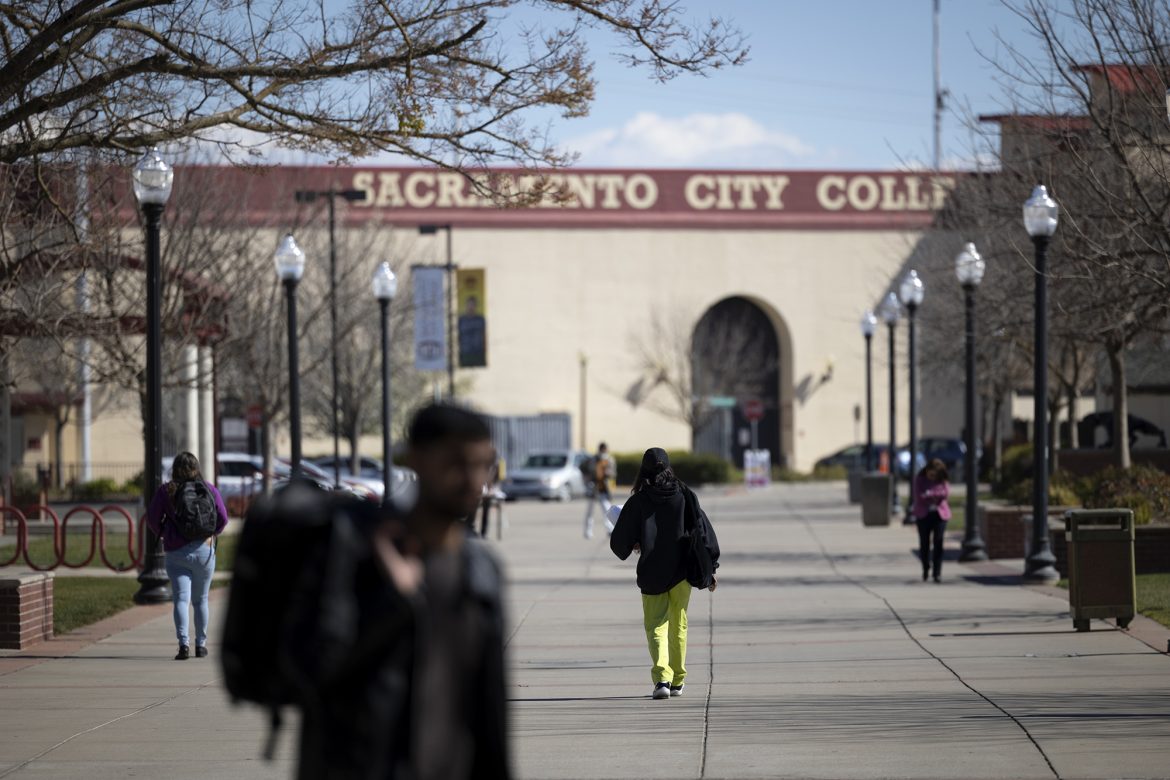 Students walk through campus at Sacramento City College on Feb. 23, 2022.

After community college enrollment collapsed in late 2020, California lawmakers last year gave the system of public two-year colleges $120 million to help stem the tide of departing students and bring them back.

So far, progress has been uneven. Through last fall, just 17 of California’s 116 community colleges have seen the number of students they enroll grow since fall of 2020. At 42 colleges, more students left in the fall of 2021 than in fall of 2020, according to a CalMatters analysis of system enrollment data.

Officials acknowledge that the number of students attending continued to sag systemwide. “Fall 2021 headcount is down approximately 7% from fall 2020 and down 20% overall compared to fall 2019,” a cratering of more than 300,000 students over those two years, said a March memo from the California Community Colleges Chancellor’s Office.

While $120 million may be a rounding error in the state’s $47 billion commitment to higher education for the current budget year, it’s still a large chunk of change.

The expected return on investment is unclear.

While colleges received $20 million to stimulate re-enrollment in March of last year — well before fall term began — the remaining $100 million only reached colleges in the middle of September at the earliest, several weeks after nearly all colleges started their fall semesters. While most state higher education financial support is annual, this money was one-time.

That means the bulk of the money’s impact can’t be measured yet. The full package’s effect on student enrollment for the spring is also unknown because colleges don’t report their student population numbers until around July.

Nor will the public ever truly know how colleges spend this money: Lawmakers and the governor last year didn’t include any reporting requirements for colleges to show how they are using the re-enrollment dollars.

The chancellor’s office of the community colleges supports Newsom’s plan for re-enrollment money but in its budget request last year sought $20 million in annual support, not $150 million one-time.

Early signs suggest the $120 million for re-enrollment has made a difference in stabilizing campus student populations, but other factors are also responsible for bringing more students back or keeping them from leaving. Offering more courses in-person played a role, several college administrators said, as did billions of dollars in federal COVID-19 relief aid for students and colleges.

Much of the enrollment loss is outside the control of colleges. The labor market is sizzling now, with rampant labor shortages leading employers to pay well above minimum wage for positions that typically don’t require a college education. Historically, community college enrollment swells during economic downturns when employers are more selective, prizing applicants with college degrees. But enrollment dips when the economy is hot because adults don’t view education as an immediate ticket toward gainful employment.

The whole California community college system isn’t likely to return to its fall 2019 enrollment levels until two or three years from now, said John Hetts, a visiting executive for the chancellor’s office who oversees enrollment.

Colleges will have to work harder to keep their student populations steady. The public K-12 system is projected to shrink by nearly 600,000 students in eight years. California’s overall population has been either stagnant or in slight decline. Enrollment growth will have to come from more adults who aren’t recent high-school graduates — including the roughly 3 million 25-to-54-year-olds who already have some college but no degree — and from college efforts to retain a greater share of their existing students, Hetts said.

Rio Hondo College, in a suburban pocket of eastern LA County, saw its number of students inch up from 16,292 to 16,370 since fall 2020. That’s still well short of the more than 21,000 enrolled in fall 2019, but makes it one of the very few community colleges that managed to actually grow in the past year.

Signing up students for financial aid has been key, Rio Hondo officials said.

The college used $200,000 of its $1.2 million in re-enrollment money to hire 10 part-time staffers who coached students through applying for federal and state financial aid. All that money came from last year’s smaller March allotment of re-enrollment funding.

The goal at the start of last fall was to increase the number of new and current students applying for financial aid by 5%, a target the school hit, said Earic Dixon-Peters, vice president of student services at the college. With state or federal dollars in hand, more students remain in school.

Rio Hondo is also setting aside $4 million in federal COVID-19 relief to pardon students’ campus debt, such as from unpaid tuition bills. Before the pandemic, if a student owed the campus any amount of money, that student could not register for classes. Now, registration is open to students with outstanding balances. So far 4,000 students took up the college on that offer, leading to $1.7 million in fee forgiveness, said Stephen Kibui, vice president of finance at Rio Hondo.

But the college’s $1.2 million share of the state re-enrollment money had nothing to do with it. The college moved the first installment in March to this fiscal year. As for the remaining $1 million? “We didn’t even know about it till October,” said Kindred Murillo, the college’s interim president. Fall classes at Santa Barbara began Aug 23.

The lost students were “the students that really do well in in-person classes and were struggling in the online program,” said Murillo.

The college’s push for more in-person classes included a focus on non-credit courses, such as English language courses, Murillo said. Students in those courses are less likely to be able to take classes online, either because of insufficient internet and computer access or language barriers.

State re-enrollment funds are helping to boost spring enrollment, Murillo said. The college used some of the money for a re-enrollment event in December that brought back 150 students for spring. Students appreciate that 50% of the college’s courses will be in person, Murillo said. The college is also using part of the state funds to dole out $500 to select students to cover books and other school supplies.

College of the Siskiyous, the state’s northernmost community college located an hour from the Oregon border, also saw a modest rebound in the number of students attending last fall. Among students in credit-bearing classes, enrollment increased from around 1,300 to 1,400, a campus administrator said. That’s still below the 1,800 enrolled in credit-bearing courses in fall 2019.

The college has so far used about $36,000 of its re-enrollment money to print schedules and mail them out to its service area — roughly the size of Rhode Island. Administrators figured sending out physical copies of the course schedule would reach potential students in the rural north who either lacked reliable internet or were unaccustomed to online content. “That could have contributed to some of our enrollment growth,” said Char Perlas, interim superintendent/president of the college.

It also plans to use much of its roughly $400,000 in re-enrollment and retention money as a down payment for an outreach department with three staffers, though the college will have to find other, ongoing sources of money to foot the bill.

But because the college is so isolated, it struggles to hire instructors, an ongoing problem that likely prevents the campus from enrolling more students. For instance, the college has an engineering degree, but there are semesters in which it offers no engineering courses, administrators said.

More than just printed schedules or outreach, though, it’s likely just a consistent return to in-person learning that will boost enrollment.

Expanded in-person learning and COVID-19 safeguards lured back Selena Johnson, a musical theater student. Before the pandemic cut the spring term short in 2020, Johnson was taking courses full-time. But the next 18 months of online instruction were a struggle.

“It was really hard to go from being excited about going on tour across the state — and being able to have that energy when we would meet up and learn together — to being completely isolated,” Johnson said.

She quit school last fall to work, unsure if she’d ever earn a degree. But the college’s commitment to COVID-19 safety precautions and the return of in-person choir classes brought her back to school this spring on a part-time basis.

It’s a pace that works for her, and if she takes two classes next fall and two more the spring after, she’ll be able to graduate before summer of 2023.