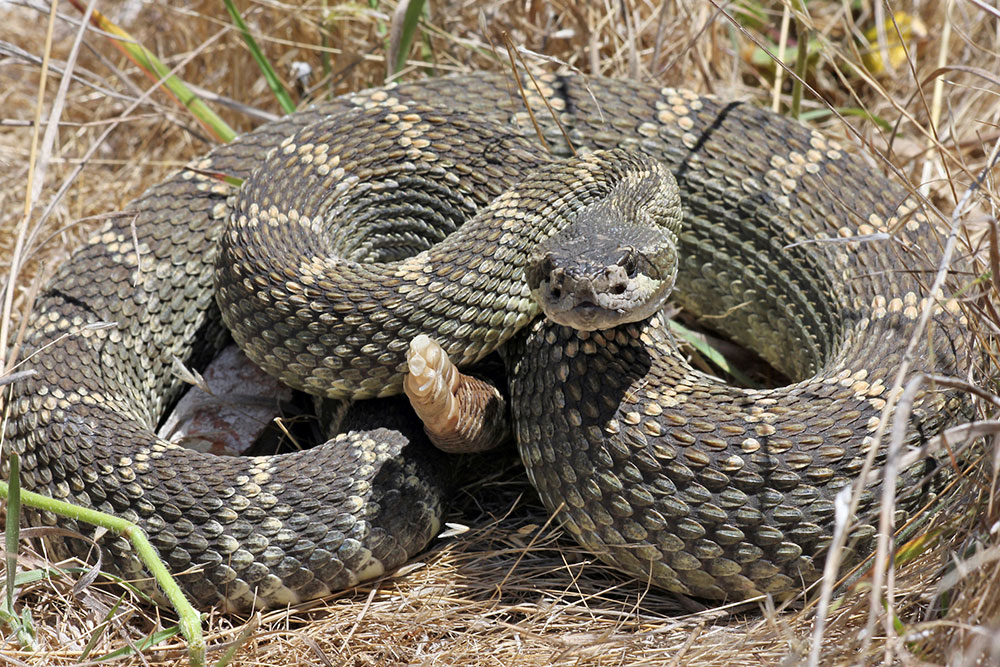 California Department of Fish and Wildlife

The northern Pacific rattlesnake has a broad, flat, triangular head and is shades of brown with darker splotches.

March used to be considered a relatively safe month for snake-adverse hikers. Not anymore.

By mid-month, photos of wild snakes — especially rattlesnakes — were showing up on social media pages of both hikers and non-hikers in the Bay Area. Not all of the photos were taken in far-flung wilderness areas; some were in suburban neighborhoods and at least one was near downtown Walnut Creek.

It’s California. We live with and around wild animals. But snakes usually wait until April or May to start showing up regularly. Climate change and California’s historic drought — which some experts say will be more of a regular thing for the state — are changing how plants and animals do their business. And as it gets warmer this year, more snakes will be out, warming their cold reptile blood in the sunshine.

Clayton resident Janet Keane and husband Michael regularly hike the northern slopes of Mount Diablo. She spotted her first rattlesnake of the season on March 19.

“Mike and I were on the mountain; just when he told me to take the lead, I spotted a baby in the trail all curled up,” Keane said. “We figured we could just jump over it, and then I remembered where there is a baby, there is probably a momma and siblings about. So we turned around and high tailed it out of there.”

“We’ve seen them before, but never this early,” Keane said.

The Northern Pacific Rattlesnake is the only snake in the Bay Area dangerous to humans. It is not aggressive, and only bites if it is threatened or provoked, according to wildlife experts.

“Historically for our area, it is generally closer to the last half of April and into May before they become more active, but in our evolving climate here they can, and do, become active during warmer cycles of weather, like what we have been experiencing this week,” Flowers said. “This is generally true of all of the species of snake that inhabit our region.”

Dave Ricketts is an associate pastor at the Moraga Valley Presbyterian Church. He’s also been a snake lover since childhood. He started going out as an amateur snake wrangler a few years ago when he saw on social media that people were killing gopher snakes, believing they were rattlers. Ricketts doesn’t want people to kill any snakes. So he bought a snake hook, snake tongs, and a 5-gallon bucket that is dark inside to calm the snakes down (he also got some training from his son, who works at reptile store East Bay Vivarium in Berkeley). He said he’s already getting calls this year.

“I’ve started seeing snakes early this year because the warm weather will be a trigger for eggs to hatch,” Ricketts said. “I can tell they’re coming out earlier.”

Ricketts said his church is all about helping the community, so he doesn’t mind gearing up for the occasional rescue (there’s no charge, though people are welcome to donate). To minimize contact with humans, he releases the snakes in outlying unincorporated areas where there aren’t trails — usually down hills, as snakes are unlikely to climb back up the hill.

“They live all over the area; this is their territory, they were here first,” Ricketts said. “So it’s really on us.”

Flowers had some tips for those coming in contact with rattlesnakes.

“Rattlesnakes are generally not aggressive unless provoked and contrary to popular belief they do not always rattle before striking,” he said. “When walking in a natural area avoid walking – or walking your dog – in tall grass or places where you cannot see the ground. They may also be hiding under brush, rocks, and branches so it is best to leave these things undisturbed. Dogs should be on a leash.”

“If you see one on a path, walk around and leave alone and warn others around you. Do not try to move the snake,” Flowers said. “If you have one in your yard you can contact a snake removal service that will find it a new home. If you or a pet are bitten do not attempt things like tourniquet or attempt to remove the venom by any method. Seek medical or veterinary attention as soon as possible.”