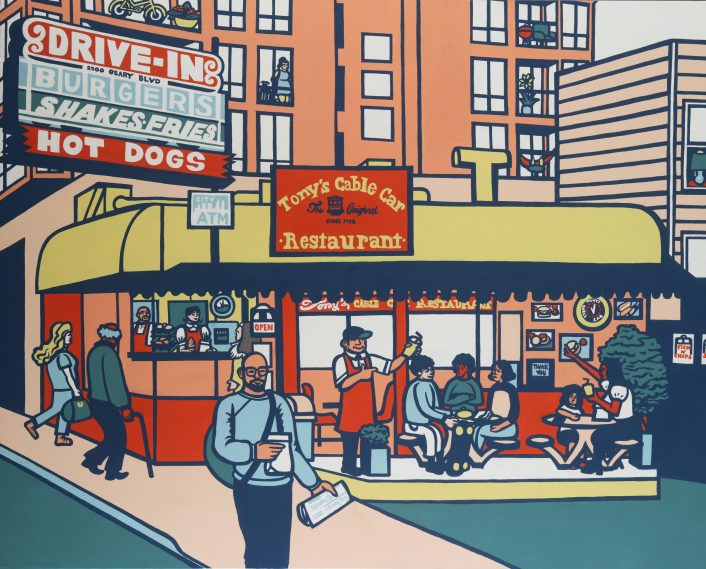 “Some people might get bored of their jobs or their environment, but for me? No way,” says Michelle Delaney, owner and manager of 111 Minna Gallery, the cafe, art gallery, venue and bar in San Francisco’s SoMa District that recently celebrated its reopening after the pandemic shutdown and a series of devastating fires at the space.

At the turn of the millennium, Delaney was a film school student enrolled in the Academy of Art, working her way through a series of underwhelming service gigs. When she started bartending at Steff’s Sports Bar in San Francisco, however, another life called to her. Conveniently, this call came from directly across Second Street.

Opened in 1993, 111 Minna Gallery was a dark, anonymous techno club run by the club founder, Eiming Jung. The brandless specter of the club across the street proved seductive, and Delaney was quickly drawn in.

“[Jung] had it dialed in,” Delaney says. “He was fully into this place being a place you discover.”

In 2000, shortly after her own discovery, Delaney left Steff’s Sports Bar to bartend for Jung.

“It was crazy because my life was definitely on a different path [at the time],” Delaney recalls. “I was assuming I was going back to L.A.”

To Delaney’s surprise, 111 Minna fulfilled much of what she had learned in film school, demanding her skills in lighting, video-making and event planning.

“I was never really meant to just be an artist,” Delaney says she realized. “I was also always meant to be a super communicator. Bringing people together is what I’m really good at.”

Their vision was to re-create the space as an art gallery, without sacrificing the original spirit of inclusivity and unpretentiousness.

“It’s been neat being in an environment where it doesn’t matter what you look like,” Delaney says. “I always coined us as ‘rock ’n’ roll professionals’ because I can come here in whatever I want.”

Under the influence of Delaney’s rock ’n’ roll professionalism, 111 Minna proved to be fertile breeding ground for the arts, hosting dancers, poets, comedians and visual artists.

By day, it was a relaxed cafe, serving espresso to writers, artists and neighborhood regulars. By night, it was ripe for ruckus, serving liquor and the latest in disc jockey din. In short, it was San Francisco at its best; a creative collective of locals seeking art, joy and meaning in their community.

Then the pandemic seized the city in March 2020, and 111 Minna took some serious blows.

Because indoor entertainment was no longer an option, Delaney had no choice but to dismiss her staff. As the neighborhood fell quiet, Delaney resolved to remain busy, hosting remote exhibitions, practicing her bartending skills and training to be a yoga teacher.

Chaos reigned repeatedly, however. Over the course of the ongoing pandemic, the gallery space weathered three fires, wittingly and unwittingly started by locals wandering through the alleyway that skirts the edge of the building.

Although Minna’s original Douglas fir flooring was destroyed by these fires, only one art piece was lost.

“Minna has had this really weird, beautiful but eerie blessing,” Delaney says. “We’ve had these insane dance parties, and the art has always been fine.”

In the aftermath, the wood flooring was replaced with concrete, and the space was made over with new curtains and furniture.

Revived after a long, perilous hiatus, 111 Minna reopened to the public last month.

Thursday, Jan. 13, marked the opening night of visual artist Emily Fromm’s solo show, “There You Go, Wherever You Are,” which is on display through April 29.

Refreshingly, Fromm’s work does not indulge the quietude of global pandemia. Her work depicts San Francisco in motion, re-creating slices of the cityscape, from Tony’s Cable Car Restaurant to the gallery itself.

It’s a beautiful answer to a bleak time in history. Fromm resuscitates the city with bold blues, rich reds and shades of pink and peach.

“San Francisco, to me, is like visual candy,” says Fromm, who cites comics artists Daniel Clowes, Charles Burns and Adrian Tomine as her favorite graphic artists. “I’ve never lived somewhere that I’ve been so inspired by.”

At the height of the pandemic, Fromm started painting murals with Paint the Void, an organization that provides funding for artists to create public art in neighborhoods wracked by business closures.

“After June 2020, that was when even more artists became interested, painting George Floyd portraiture and Black Lives Matter murals,” Fromm says. “It was a pretty special San Francisco phenomenon.”

Fromm has exhibited her work at a number of other local galleries, but she calls 111 Minna her “mainstay,” first exhibiting her art there in 2017, and again in 2019.

In meeting with both of them, it’s clear that Fromm and Delaney have established a real friendship over the years. Delaney evidently admires Fromm’s work, just as Fromm admires Delaney’s mission as a champion of art and artists.

“It’s a bummer that [San Francisco-based artists and musicians] don’t have some of the opportunities that I feel like Hollywood, Seattle and other cities [offer],” Delaney says. “Everyone should have the ability to show their art.”

Emily Fromm’s “There You Go, Wherever You Are” is on display at the gallery through April 29. Find out more about art shows and events at 111 Minna Gallery, 111 Minna St., San Francisco, at https://111minnagallery.com/. Keep up with artist Emily Fromm at https://www.emilyfromm.com/.