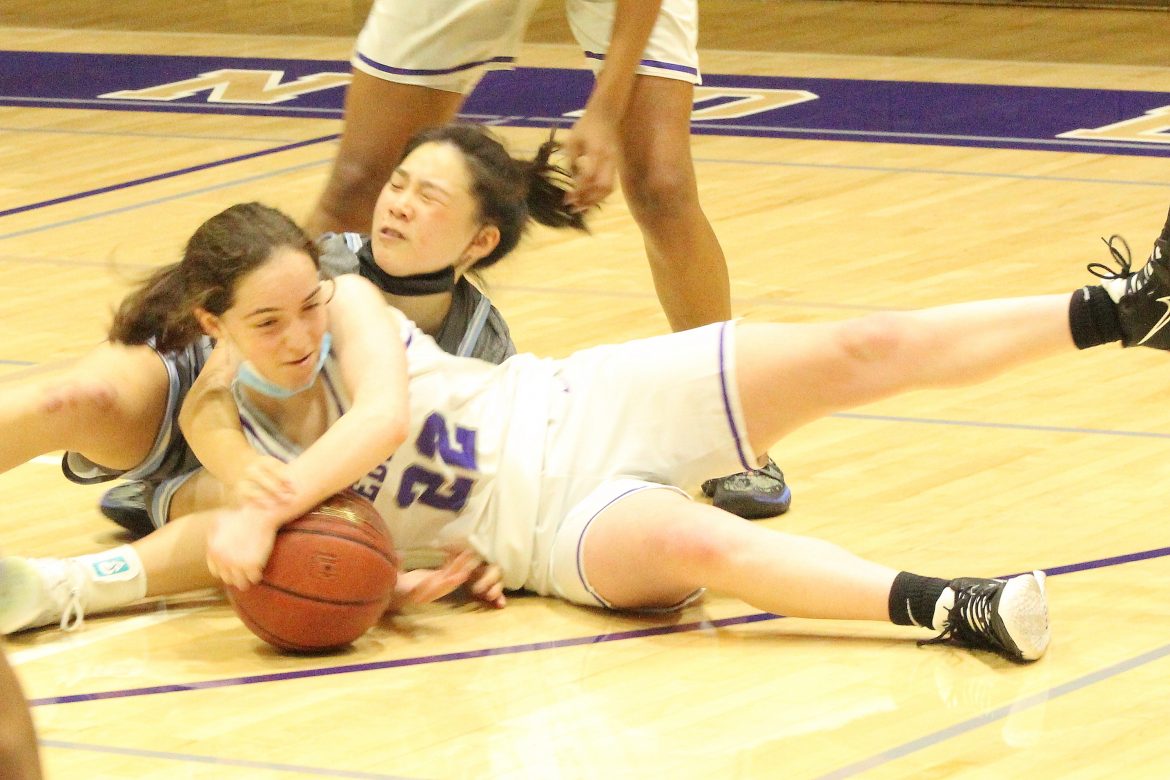 Hannah Govert saw the ball squirt out. The Piedmont High School senior was on the backside of the Highlanders zone defense late in a March 1 California Interscholastic Federation Division 2 first round game against visiting Hillsdale-San Mateo. Piedmont’s Trinity Zamora was challenging Hillsdale’s Bailey Fong, when Fong went down and the ball was loose.

Govert dove for the ball and successfully wrestled it away from Fong. The play in the final 10 seconds of the game helped clinch a 48-43 win for the Highlanders.

Hillsdale (24-3) had whittled the Highlanders’ lead down to three points and had the ball with 21.9 seconds to go. The Knights played for a potential game-tying shot. They got the ball to Fong, who led the team with 16 points, including three 3-pointers. But the Piedmont defense was able to disrupt the play, and Govert came up with the big steal. She was sitting on the floor with the ball, looked up, and found Zamora and passed it off.

“I knew we needed a stop because it was a one-possession game,” Govert said. “It was kind of a blur, I don’t even remember it perfectly. But the ball was in my hands and I was looking up and Trinity was right there.

Said Zamora, “(She was) just being very aggressive. We love to see it. We needed that play.”

Govert can get lost in the shadows with Zamora and Natalia Martinez earning the plaudits for their scoring and rebounding. But she has been a key contributor with her defense and passing. She was especially needed because Maddie Hill was on the bench in street clothes, a boot and crutches, thanks to a sprained ankle suffered in the North Coast Section Division 4 semifinals. Hill started and played limited minutes in the NCS final, but her season is now over.

As a result, Piedmont coach Bryan Gardere ended up running a 3-2 zone defense for almost the entire game against Hillsdale.

The defense was outstanding all night. The Highlanders forced 24 turnovers and took 12 more shots from the field than the Knights.

“I think we expected them to play more one-on-one,” Hillsdale coach David Ichiki said. “We did see them play some zone against Marin Catholic, so we did have a game plan going in.”

Gardere said the Piedmont offense wasn’t pretty. Zamora and Martinez each scored 17 points, but Zamora was just eight of 25 from the field. She had 11 rebounds and four assists. Aniya Perine had seven points and five rebounds.

Lizzie Manis had 10 points and 11 rebounds for the Knights.

Tickets for the Lincoln-Stockton game must be purchased online at https://gofan.co/app/events/568918.