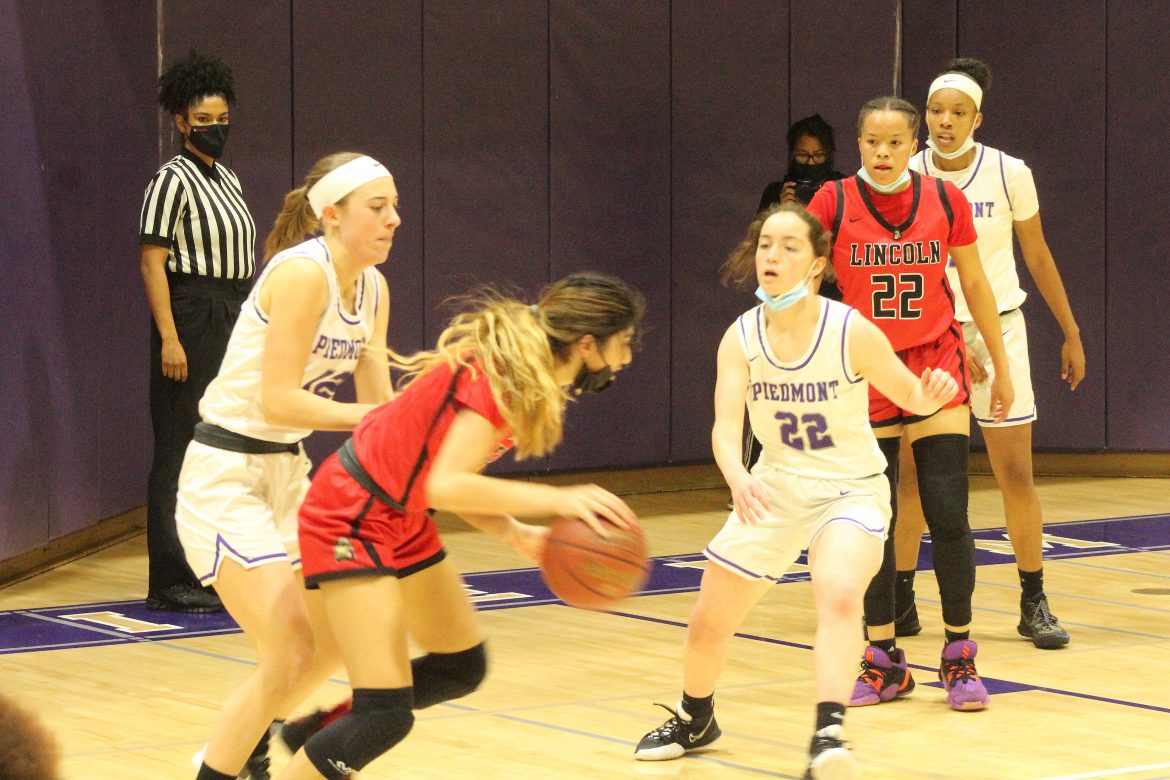 The Highlanders saw their season come to an end on March 3 with a 63-56 loss to visiting Lincoln-Stockton in the second round of the California Interscholastic Federation Division 2 championships.

Lincoln advanced to the northern regional semifinals at San Joaquin Memorial-Fresno on March 5.

Seasons tend to end abruptly in the state tournament, and Piedmont’s was no exception. The Highlanders, the top seed in Division 2, took a 48-47 lead at the end of three quarters on Natalia Martinez’s buzzer-beating 3-pointer.

But Piedmont didn’t score again until nearly midway through the fourth quarter. The Trojans got 3-pointers from Junae Mahon and Eliza Navy to open the quarter to regain the lead.

The Highlanders (24-7) fought back and whittled the lead down to 55-54 with one minute, 47 seconds left. However, that’s when Trinity Zamora picked up her fifth foul and left the game. Lincoln just had too much against the short-handed Piedmont team, and pulled away in the final minute.

“That was a hell of a run,” Martinez said. “We beat rivals O’Dowd, we beat Oakland Tech, we beat all the good teams in the Bay Area. We just couldn’t pull this out.”

A lot of things handcuffed the Highlanders. Maddie Hill missed the two state tournament games due to a sprained ankle. She was the third scorer behind Martinez and Zamora all year long and also helped bring the ball up court. She was missed against Lincoln’s full-court 2-2-1 press.

Zamora got into foul trouble, picking up three in the first half and her fourth with 3:20 to go in the third quarter. Piedmont coach Bryan Gardere didn’t pull his star off the court, however, and she managed to avoid another foul until the final minutes.

“You can’t,” Gardere said, noting the circumstances. “We have nothing to lose.”

Of course, if you bring up adversity, we have to mention Lincoln’s quarterfinal loss in the Sac-Joaquin Section Division 1 tournament. McClatchy-Sacramento went up on a basket with seven seconds left just as the shot clock expired. The fans and the officials thought it was the final buzzer, and the fans stormed the court while the officials ran off. Mahon drove the length of the court to try to get off a tying shot, but she had to weave through the fans. Because the officials left the court believing the game was over, there was nothing anybody could do and the Trojans lost.

So, in a way, it wasn’t a surprise when a blackout struck the East Bay late in the first quarter and caused a one hour and 20 minute delay. The CIF even tweeted out that the game was going to be moved to Oakland Tech and resumed at 8 p.m.

Instead, the lights came back on around 7:15, and after the teams warmed up a second time, the game resumed.

Lincoln (22-9) had taken a 13-5 lead before the interruption. The Trojans’ pressure disrupted Piedmont’s offense as the Highlanders committed eight turnovers in the first quarter and 21 in the game.

Martinez scored 10 points in the second quarter and 18 in the first half en route to 31 in the game. Piedmont was trailing just 33-31 late in the half, but Lincoln’s Faith Shelton sidearmed a halfcourt shot at the buzzer to put the Trojans up 36-31 at the break.

“See, the trick is you’ve got to whip it from the waist so I get the angle right because I can’t go dead on,” Shelton said, tongue in cheek.

Shelton, a 6-foot-2 center with a point guard’s passing ability, was trouble all night for the Highlanders. She scored 13 points, grabbed 18 rebounds and handed out four assists. She threw multiple behind the back passes and threaded the needle between defenders on others.

“She’s like the Magic Johnson on the floor,” Martinez said. “That’s what we called her. I like to predict where the pass is going, I like to get a lot of deflections and her doing the no-look really threw me off on my defense.”

Zamora finished with 18 points and six rebounds. Hannah Govert had 13 rebounds and scored two points before fouling out late.

“We competed,” Gardere said. “As long as we compete, I’m actually OK. I probably won’t sleep well tonight or tomorrow. But I’m not mad because we didn’t lay down.”