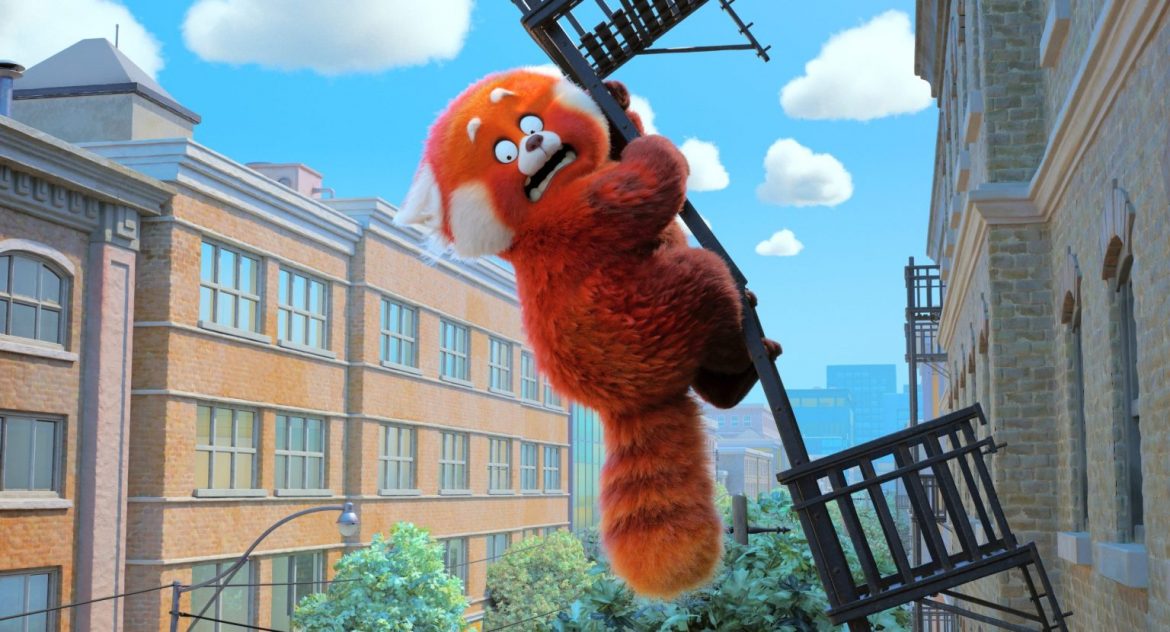 Whether you’re heading out to see what’s showing at Berlin & Beyond or sampling some Mostly British cinematic wares, there’s an in-person Bay Area film festival this weekend ready to meet your every need.

Should you simply prefer to stay in, Emeryville-based Pixar provides ideal couch-ready entertainment with its latest, “Turning Red.” But there’s a chance to also see it on one East Bay screen.

Even if you’re not ready to return to theaters, you can sample some goodies that are part of the virtual East Bay International Jewish Film Festival program, also kicking off this week.

If you need some inspiration, then get set to be in awe of the amazing female athletes — and their feats — profiled in the Women’s Adventure Film Tour.

Here’s the lowdown on all of those, along with a few recommendations to get you started.

The annual Berlin & Beyond Film Festival — be it in person or virtual — consistently comes up with an impressive program, pinpointing discoveries that you might not have heard much about — yet. Such was the case last November, when San Francisco’s Roxie hosted the North American premiere of Austria’s top-notch Oscar submission, Sebastian Meise’s “Great Freedom.” While the risk-taking drama didn’t make the final-round cut, it certainly deserved to be there.

But let’s not digress too much.

The 26th iteration of the fest is what to look forward to now, and it’s certain to entertain and enlighten throughout its six-day run, back in person Friday through March 16.

The opening night selection “Next Door,” directed by and starring “The Falcon and the Winter Soldier” actor Daniel Brühl, piques our interest. The cagey drama finds the German-Spanish actor playing an actor much like himself, who runs into a guy who takes a special, perhaps devious, interest in him at a bar. It screens at 6:30 p.m. Friday at the Castro Theatre, and is followed by an opening night reception (separate ticket price).

Other Berlin & Beyond notables include the North American premiere of Andreas Kleinert’s biopic “Dear Thomas,” a buzzed-about epic (it runs nearly three hours) that depicts the eventful, purpose-driven life of poet/writer and rebel Thomas Brasch, played by Albrecht Schuch (6 p.m. Saturday, Castro Theater); the Castro Closing Night Film “Precious Ivie,” a thoughtful drama following the evolving relationship between two Black half-sisters in Germany after the funeral of their father (8:45 p.m. Sunday; also showing at 6:30 p.m. March 15 at the Shattuck); and director Peter Luisi’s “Princess (Prinzessin),” which is partially set in the Ukraine and about a recovering alcoholic uncle trying to help his beloved, drug addict niece (8:30 p.m. Monday, Aquarius Theatre in Palo Alto).

For tickets and a complete list of screenings, visit https://berlinbeyond.com/2022/.

You can always count on the Mostly British Film Festival to bring a little fizz to the film festival circuit, and such is the case in this year’s lineup, unspooling Thursday through March 17 at the Vogue Theater in San Francisco.

The festival encompasses films from the United Kingdom, Ireland, Australia and India and formerly pops the cork on its overflowing program with the fact-based comedy “The Duke” starring Jim Broadbent and Helen Mirren. Broadbent portrays a cab driver who snatched a Goya in 1961. It screens at 7:30 p.m. Thursday and will include a Zoom intro from Mirren. A party follows at the Laureate Bar & Lounge, 444 Presidio Ave., SF.

Some other standouts include the striking Australian neo-noir “The Dry” with hunky and rarely-been-better Eric Bana playing a detective who returns to his drought-plagued hometown for a friend’s funeral (5:30 p.m. Friday); the feuding-couple pandemic comedy “Together” with a game James McAvoy and Sharon Horgan tearing into each other with vitriolic passion (3:15 p.m. Saturday); the award-winning documentary “My Name Is Gulpilil” on the late/great Australian actor David Gulpilil, current focus of a monthlong series at the Smith Rafael Film Center (5:30 p.m. Saturday); the well-acted Irish road picture “End of Sentence,” in which an uptight, estranged dad (John Hawkes) takes his son (Logan Lerman) on a journey to scatter ashes (3:30 p.m. Sunday); the harrowing but rewarding Phyllida Lloyd drama “Herself” about a battered woman striving to establish a new life for her children. (6 p.m. Sunday); and the breezy, good-humored, making-of-a-diva comedy “Falling for Figaro” with a standout performance from Joanna Lumley as a kooky opera coach (8 p.m. Monday with Lumley appearing via Zoom).

For tickets and a full schedule, visit http://mostlybritish.org/.

The virtual East Bay International Jewish Film Festival gets underway Saturday and boasts a lineup of 29 features and runs through March 26. It will feature 12 speakers.

There’s a heady mix of narrative film and documentaries worth checking out, including “The Automat,” a nonfiction overview of the once-popular Horn & Hardart, the restaurant chain that was celebrated for its good food that took an automated dining route; the taut and devastating dramatic re-creation of the 2015 terrorist attack in Copenhagen “Powder Keg,” costarring Nikolaj Coster-Waldau; the coming-of-age/coming-out 1980s set drama “Minyan” about a 17-year-old juggling tradition with desire; the alternately funny and sad and intensely personal “Neighbours” about a young boy’s tumultuous life in a 1980s Syrian border village; “Wet Dog,” a thought-provoking cinematic retelling of an autobiography about a 16-year-old Jewish youth who doesn’t reveal to his friends that he isn’t Muslim; and the strikingly shot WWII drama “Persian Lessons,” a nail-biter about a marked-for-death man who deceives a Nazi commandant that he knows Farsi so he can stay alive. It has a knockout ending.

For a full list of films and to purchase tickets, visit https://www.eastbayjewishfilm.org/.

Ideally timed to coincide with Women’s History Month is the Women’s Adventure Film Tour, which rappels, skates, climbs and bikes its way this weekend into the Smith Rafael Film Center.

The program’s composed of short films depicting inspiring stories about the women’s outdoor (mostly) athletic pursuits. “Sibling Rivalry” shines a light on cyclists Ryan and Becky Gardner, brother and sister, who love competing against each other. If you prefer running, you’ll enjoy “Running Out,” a 15-minute short from Australia that follows ultra-runner Lucy Bartholomew as she pursues her most formidable course yet.

For showtimes and tickets, visit: https://rafaelfilm.cafilm.org/womens-adventure-film-tour-2022/.

Although it’s a bummer that most of us won’t be able to see the dazzlingly animated “Turning Red” on the mightiest of Bay Area movie screens, you’re still in for another animated treat from Emeryville-based Pixar, should you have Disney+. The good news is that even if you don’t have that streaming service, the Grand Lake Theatre in Oakland is there to help, showing it from Friday to March 17. (For ticket info and showtimes, visit http://www.renaissancerialto.com/, but you better get them quick.)

In 2015, Pixar collected raves for capturing the multitude of interior voices of a girl in “Inside Out.” While Domee Shi’s late ’90s, early 2000s Toronto-set “Red” focuses on Mei (voice of the East Bay’s Rosalie Chiang) as she transitions into early womanhood and covers some of that fraught time as well, it does so with much more candor and insight.

Mei’s out-of-control feelings and emotions have the power to turn her into an enormous and awkward red panda, a spectacle that understandably concerns her hypervigilant and by-her-side mother (Sandra Oh). “Turning Red” bounces around a lot, like its main character, in order to mirror a 13-year-old’s emotional and physical rollercoaster ride. It’s Pixar’s 25th feature, and it’s also one of their most ambitious and narratively audacious adventures yet. (Releases Friday on Disney+)

And finally for those seeking to change or make the environments in which they live better now and in the future there’s San Francisco’s Urban Futures Film Fest festival running from Wednesday through Sunday.

A joint partnership with the SF Urban Film Fest and Yerba Buena Center for the Arts, the program will be offered in person and virtually.

The five-day festival is anchored around these day-by-day themes: Wednesday (“Tell It Like It Is: Conversations Between the Global North and South on Design and Community Life in Human Settlements”), Thursday (“Here, Now and Beyond: Cities of the Afrofuture”), Friday (“Through the Lens: Realizing Identity & Community Needs Through Filmmaking”), Saturday (“Culture Aid”) and a by-invitation-only event Sunday.

For more information and for a list of films, visit https://sfurbanfilmfest.com/2022/.