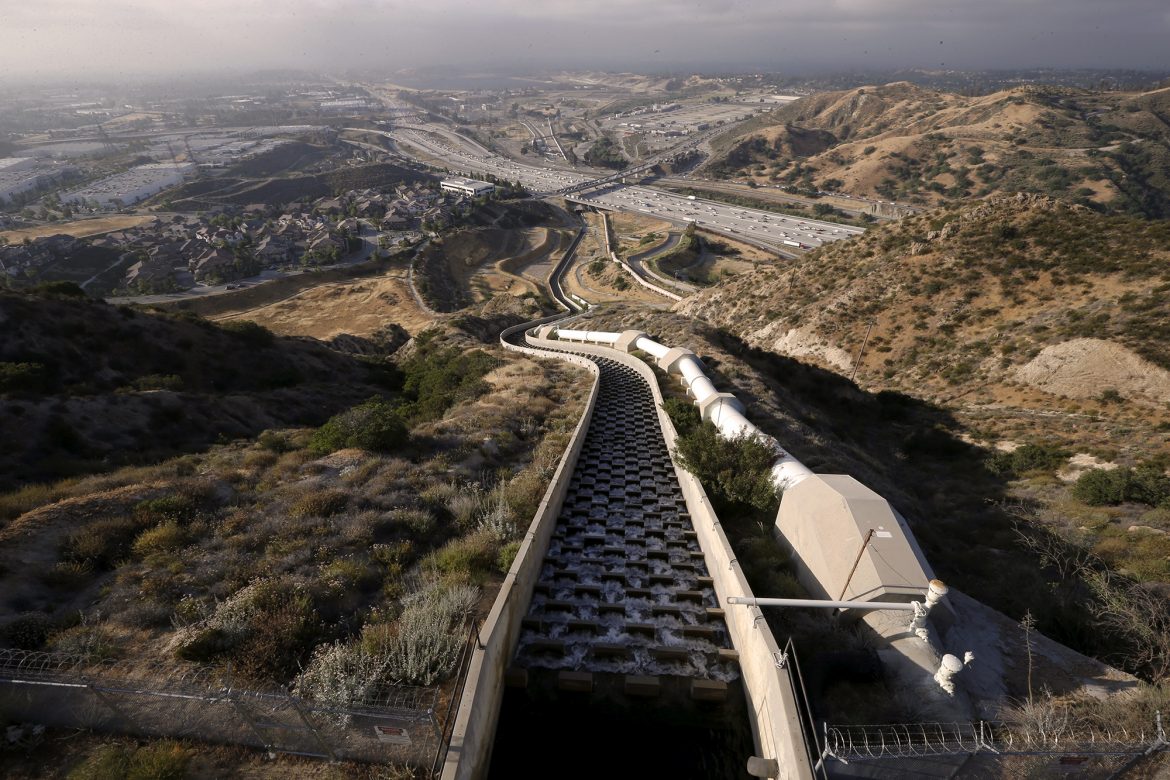 The Los Angeles Aqueduct Cascades in Sylmar, California in 2015. The aqueducts bring water 223 miles from the Owens River in the eastern Sierra Nevada mountains, and 137 miles from the Haiwee Reservoir, and are a major source of water for Los Angeles. REUTERS/Lucy Nicholson

Despite pressure from experts urging a strong mandate, the order leaves the exact conservation measures up to the urban water providers and major water wholesalers that supply the vast majority of Californians. It does not affect agricultural water providers, or the small water systems that are especially vulnerable to drought.

“I would have liked to see a more directed statewide mandate that would have taken into consideration regional per capita water-use levels,” said Newsha Ajami, chief strategy officer for research at Lawrence Berkeley National Laboratory. “However, I am glad to see he is initiating efforts to curb outdoor water use and banning non-functional turf.”

Water systems, however, applauded Newsom for leaving water conservation up to local agencies.

“The Governor’s Order today recognizes the diversity of California communities and their water supply conditions,” Jennifer Pierre, general manager of the State Water Contractors association of public water agencies, said in a statement. “Ordering agencies to exercise their specific plans strikes that important balance of statewide needs and local action.”

Under the order, which will require emergency regulations that are expected to take effect mid-June, local water suppliers must act as if their water supplies have dipped by at least 10 to 20%.

Each agency has spelled out what actions this degree of reduction — called a stage two water shortage — will trigger in their required Water Shortage Contingency Plans. This could include cutting the number of days when outdoor irrigation is permitted.

“That’s what we’re aiming towards: That everyone has a clear message of the need to conserve, but tailored locally based on the experiences of those suppliers,” said Jared Blumenfeld, California’s secretary for environmental protection.

Already, 41% of 385 water suppliers have reached or surpassed this level of shortage, administration officials said.

That includes San Jose Water, which supplies thousands of customers in the heart of Silicon Valley. Under a stage two water shortage, it would cut irrigation to three days a week — but it’s already reached stage three and cut customers back to two days of outdoor watering a week.

“Our current restrictions are already more restrictive than what the governor announced,” said Liann Walborsky, director of corporate communications for San Jose Water.

State officials tally 55 water providers — or about 14% of the water systems reporting their conservation efforts to the state — that have not yet activated their water shortage contingency plans.

Many are in Southern California, according to state data, including the Yorba Linda Water District in Orange County. Stepping up local conservation to the level Newsom called for will require increased customer outreach and education, expanded rebate programs, and a requirement for customers to promptly repair leaks. It does not include mandatory conservation measures.

“A mandate to conserve would need to come from the state. Then, (Yorba Linda Water District) would enact the level of the plan that matches the mandate,” said Alison Martin, the water district’s public affairs manager — who noted it’s currently raining in Yorba Linda.

Many residents, particularly in cities and towns, appear to be ignoring the state’s pleas to take the drought seriously and cut back: In January, Californians used nearly 3% more water statewide compared to before the drought emergency was declared.

Overall, from July through January, Californians cut back by less than 7% statewide compared to 2020, according to state data.

The increase came during the the second-driest January on record, despite Newsom’s call in July for Californians to voluntarily cut back water use by 15% percent.

Over the past several weeks, administration officials have made appearances across the state, live-streaming the same request against backdrops of drought-tolerant landscaping: urging  Californians to conserve water as another dry summer looms.

The tour appears to have been laying the groundwork for a water conservation mandate, but one far more complicated than the mandate former Gov. Jerry Brown issued during the last drought, which called for water suppliers to cut back by an average of 25% statewide.

“A mandate that identifies a reduction target I think is an easier message for people to understand,” said Heather Cooley, research director with the Pacific Institute, a global water think tank.

Still, she said, there are benefits to tying Newsom’s conservation order to water providers’ existing plans for weathering dry spells: “They should be able to get started on it immediately.”

The news comes on the heels of the driest January and February on record. Historically dry conditions prompted California water regulators to cut deliveries from the state aqueduct to 5% of requested supplies, down from 15%.

Though rain and snow quenched the parched state Sunday and Monday, severe drought nevertheless continues to clutch nearly all of California. Across the San Joaquin Valley, North Coast, and the deserts of California’s southeast, extreme drought remains entrenched.

As of last week, reservoir storage had dropped to just 69% of average across the state, and the dwindling snowpack shows little hope of substantially refilling them in the dry months ahead.

Newsom’s order is more nuanced than the statewide conservation mandate that former Gov. Jerry Brown issued at the height of the last drought in 2015.

Under Brown’s mandate, water suppliers were required to conserve 25% statewide, with each assigned a specific conservation target depending on their existing use. Those that failed to conserve enough faced escalating consequences that could include fines.

This time, Newsom has taken a more localized approach, instead ordering water providers to activate stage two of their water shortage contingency plans.

Urban water suppliers are required to submit these plans for drought and other water shortages every five years, and they spell out how water systems will respond when their supplies dwindle.

Water systems step up their planned responses in six stages, depending on the severity of the water shortage. A stage one shortage reflects a 10% hit to the system’s water supply, and could trigger a range of actions including calls for voluntary conservation. A stage six shortage reflects a catastrophic cut to 50% of the system’s supply, and could trigger requirements to reduce water use by half including bans on landscape irrigation.

Felicia Marcus, a former chair of the State Water Resources Control Board, called the step welcome, yet “the least we can do…We need to put all of this on speed and change the expectation that this is a short-term moment to get through. I hope the water board and other agencies think big (versus) tinkering at the margins.”