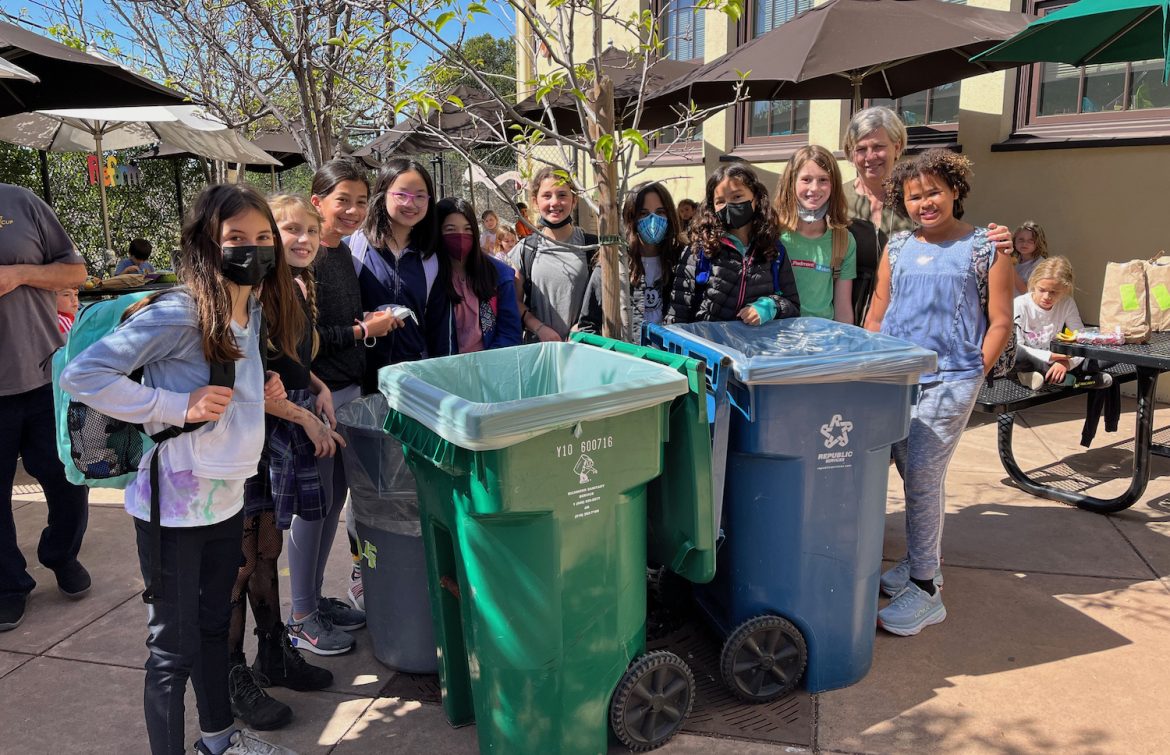 Wildwood Elementary has long had separate bins in its lunch yard for trash, recycling and compost. Yet as in-person learning resumed after the pandemic shutdown, Principal Carol Cramer was struck by how many students just tossed their waste into a single receptacle.

So when the fifth grade Girl Scouts asked Cramer how they could give back to the school, the principal didn’t hesitate: come up with ways to increase the proper disposal of lunch items.

The 11 girls in Troop 33587 have been working on the problem since November as part of an effort to earn the Bronze Award for community service, one of the highest distinctions available to Girl Scouts, according to the organization. Last week, they presented their project to the rest of the school, including a chart that shows where the items most commonly found in school lunch should be disposed of and a song, sung to the tune of Row, Row Row Your Boat, intended to help students remember.

“We are so proud of these students taking action to support a reduction in our landfill by promoting reusing, recycling and composting,” said Cramer. “The work these girls did has a chance to make a real difference for our school.”

The scouts began their research with a trip to the Emeryville Recycling Center. There, they learned that many of the things people routinely put in recycling bins are later diverted to landfills. Among these are plastic containers that still have food residue on them or soiled cardboard or paper, which can be composted, but not recycled. This sort of “mis-binning” of non-recyclables is among the reasons California recycled or composted only 42% of its waste to landfills in 2020, according to CalRecycle, a state agency, well short of the state’s 75% goal.

The Wildwood Girl Scouts witnessed this behavior firsthand when they observed school lunch. “I was shocked by how all the trash and compost are mixed in with recycling,” said Juliette Edesess, one of the scouts.

Among the troop’s observations: Students would often put all of their waste in a paper bag and then throw that bag in one bin. Few students would take the time to wipe out plastic containers, meaning they couldn’t be recycled even if they were placed in the recycling bin. And students who bought hot lunch from school were much less likely to properly dispose of their items than students who brought lunch from home, in part, the girls concluded, because the packaging changed every day.

“They just threw it all away,” said Victoria Mbise, another scout. In all, only about 15% of students put their waste in the correct bins, estimates Junie Waters Worthen, one of the scouts.

By December, the girls had started working on their presentation, and over the next few months met regularly to practice. Last week, two groups of scouts went classroom to classroom at Wildwood to pitch students on how to properly dispose of their lunch waste.

Chip bags, utensils, and sauce packets can’t be recycled, they must be thrown in the trash, the scouts said. Food scraps, napkins, dirty paper bags, and the hot lunch containers the school gives out can be composted. Empty, clean paper bags can be recycled and so can plastic food containers, but only if they’re wiped out first.

The scouts also led the classes through a game designed to teach them where to put different items, and then taught them their song: “Throw, throw, throw your trash, in the correct bin. ‘Cause if you don’t, the Earth will give in.”

“It was fun to present and I learned a lot about the consequences of not recycling and composting,” said Edesses.

Cramer called the presentation informative, inspiring and engaging. And it’s having the intended impact: “We are already seeing students making more of an effort to reduce what goes into the landfill,” she said.

Source notes: State of Disposal and Recycling in California for Calendar Year 2020