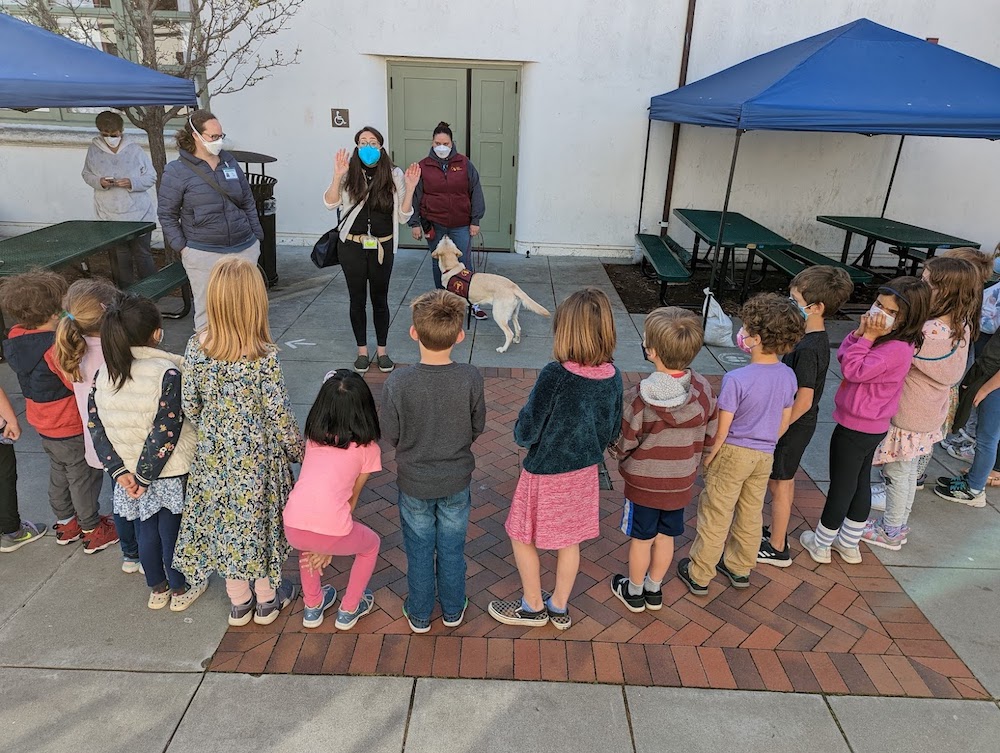 A group of Havens 1st graders listens to instructions from a service dog handler on Wednesday, Mar 18.

After a cluster of COVID cases popped up among Havens 1st graders recently, the California Department of Public Health reached out to the school to see if it wanted to take part in a pilot program for COVID-sniffing dogs. Families could opt in to the program which took place outdoors on Wednesday to the delight of the students involved.

The program is a collaboration between CDPH, Early Alert Canines, American Health Lab Association, UCSF, and the CDC Foundation. Last October, the San Francisco Chronicle reported that the state’s health department had received federal funding for the pilot program to introduce COVID-sniffing dogs into schools. Medical detection dogs are not new — they can be trained to detect disease odors for a range of illnesses including cancer, malaria and other infectious diseases.

KTVU ran a story about these service animals in December, explaining how they are trained:

The dogs aren’t sniffing for the virus itself. Instead, their sense of smell picks up the chemical changes bodies produce when fighting COVID.

“It’s the body’s response to it, and the byproduct of that, coming through the skin,” Edwards said. “Anybody the dog would alert on would have to have a rapid test, because we’d have to know if the dog was correct or not.”

Early Alert Canines, located in Concord, Calif., is part of a pilot program with the California Department of Health and the Association of Public Health Laboratories. The CDC Foundation is funding the program.

Scarlett and Rizzo are two dogs being trained to use their extraordinary sense of scent to detect the virus from a row of people and then they’ll be able to tell who tests positive for the disease, Johnston said, no matter the variant or if the person is asymptomatic.

Edwards explained it like this: “When you and I smell an orange, we go, ‘Mmm, an orange.’ A dog will smell the last three people who handled the orange, they’ll smell the soil it was fertilized with, the impurities in the water that watered it.”

The trainers at Early Alert Canines have been training medical alert dogs for 10 years, mostly for people with diabetes.

How it works, according to CDPH

Students line up outdoors, facing away from the dog. The dog sniffs each student without touching them, then signals to its handler when COVID is detected. All participating students are then tested with an antigen test to compare results. Dog results are not used to determine isolation or quarantine.

The CDPH says the idea behind the program is that dogs could be used as an initial screening tool because they are faster and less invasive than testing with nasal swabs. Rapid antigen tests would only be done if a dog identifies a possible positive.

“It was really exciting and inspiring for students to meet the dogs and to participate in the program,” said Havens Principal Anne Dolid on Friday. “The CDPH physicians and dog handlers did an incredible job explaining that they are testing a hypothesis and that they had been invited to help.”

“This program is a testament to how closely our district nurses are working with the county and state health departments,” Dolid said “We are fortunate to have so many people working to make COVID testing less invasive in the future.”