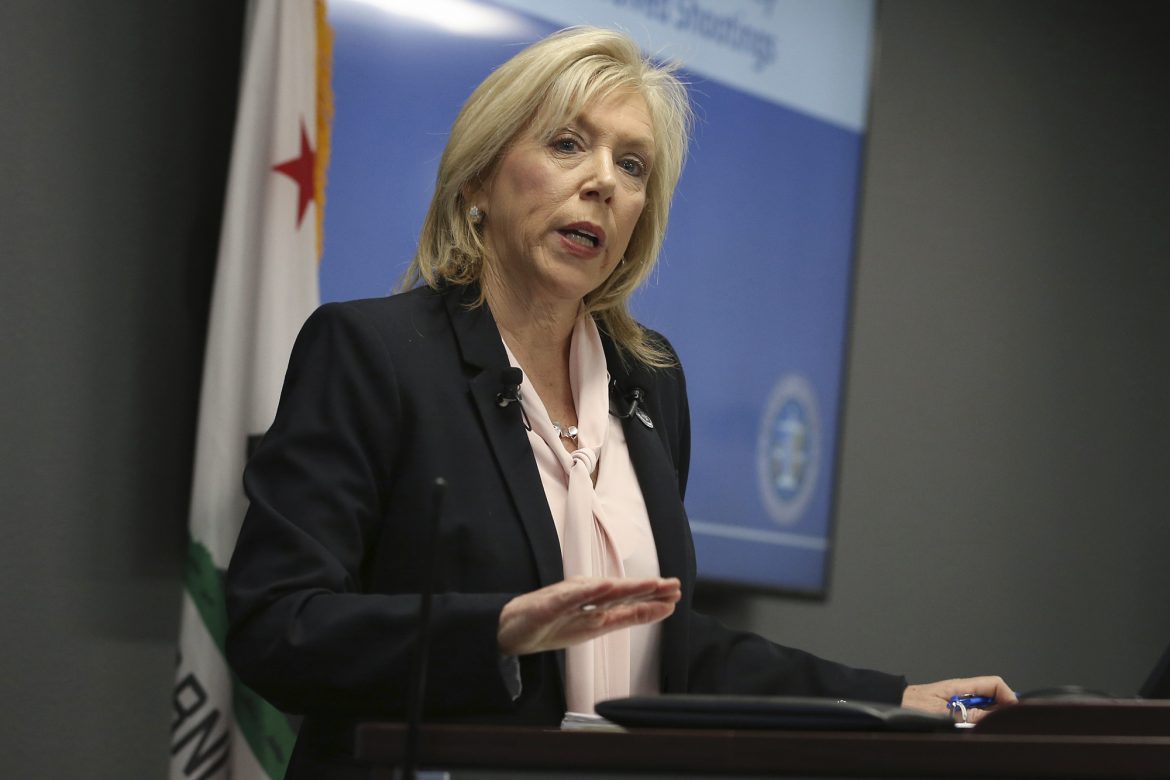 So far in the 2022 election cycle, these groups have contributed more than $1 million to campaigns for the state Legislature and several statewide offices, slightly less than the $1.2 million contributed at the same point in 2020 and significantly more than the roughly $305,000 in 2018, according to a CalMatters analysis.

As of Monday, nearly $1 out of every $6 donated by law enforcement groups has gone into the attorney general’s race, specifically to Sacramento District Attorney Anne Marie Schubert. The $176,900 in cop cash given to Schubert is about 10% of her total contributions.

She is a Republican turned independent who is the preferred pick of these groups looking to unseat Attorney General Rob Bonta, a Democrat who was appointed by Gov. Gavin Newsom in 2021.

Schubert is endorsed by one of the largest contributors: the Peace Officers Research Association of California, an advocacy and lobbying group. The organization has given Schubert $16,200, the maximum allowed for the June 7 primary, while none of her opponents have reported any law enforcement contributions so far – not Bonta, who has raised $6.4 million total so far, and not Republican challengers Nathan Hochman or Eric Early.

This is the first time since at least 1999 the organization has not contributed to the coffers of the incumbent in the attorney general’s race, according to Secretary of State records.

The Peace Officers Research Association sees it differently. Brian Marvel, president of the association, told CalMatters that “PORAC doesn’t consider there to be an incumbent in this race” because Bonta was appointed and not elected.

The other major sources of law enforcement cash are unions: the California Association of Highway Patrolmen and the L.A. Police Protective League. The CHP union has contributed $112,800 in 38 races so far, with $11,000 going to Schubert’s campaign, its first donation to a candidate for attorney general since 2007. The protective league has donated $146,600 in 25 races so far, but nothing to Schubert.

As the attorney general is the state’s top law enforcement officer, agencies can be directly impacted by decisions, including investigations of police officers.

Bonta and Schubert have different priorities about what they would do in office. Though both their campaigns discuss gun violence and prosecuting polluters, Bonta’s website highlights “fighting hate and protecting civil rights” and Schubert’s promises to “aggressively [prosecute] violent criminals.” Both candidates support the law Bonta wrote while he was a legislator that directs the attorney general’s office to investigate when law enforcement officers kill unarmed civilians.

The attorney general’s race isn’t the only statewide election where law enforcement groups are giving money. For the primary, they are limited to giving $16,200 for statewide offices, other than governor ($32,400), and $9,700 in legislative races.

Fiona Ma, who is running for reelection as state treasurer, has received the second most so far. Why do law enforcement officers care who is treasurer? The treasurer can affect their pensions as a board member of the California Public Employees’ Retirement System.

Ma’s campaign has taken in $55,200, with ​$​47,100 coming from two of the three big police groups: the Peace Officers Research Association and the Los Angeles Police Protective League. Ma’s relationship with law enforcement unions isn’t new. According to campaign finance watchdog OpenSecrets, the Peace Officers Research Association is the fifth largest contributor to Ma over her career.

So far in the 2022 election, law enforcement groups have also placed bets in 42 of the 80 Assembly races and in seven of the 20 state Senate campaigns, after redistricting dramatically changed many of the legislative districts and after a rash of resignations and decisions not to seek reelection created open seats.

Assemblymember Phillip Chen, a Republican who is running in the 59th District near Los Angeles, has raised the most from law enforcement groups of all legislative candidates, $47,400 so far, even though he’s unopposed.

While accepting cop cash might be a contentious issue within the California Democratic Party, some Democratic candidates for Assembly aren’t shy. Assemblymember James Ramos from Rancho Cucamonga has taken $37,200, while his foe in the 45th District, Republican Joe Martinez, has received no cop money.

Assemblymember Cottie Petrie-Norris of Laguna Beach has raised $27,100, while her opponent, Republican Assemblymember Steven Choi, hasn’t taken any as they compete to represent the new 73rd District centered around Irvine. And Democratic Assemblymember Evan Low of Cupertino has received $26,900, while his opponents in the 26th District, Democrat Long Jiao and Republican Tim Gorsulowsky, haven’t reported any law enforcement contributions.

In the state Senate, the top four recipients of law enforcement money are also Democrats, including three sitting senators: Tom Umberg from Garden Grove who got $26,200, Bob Archuleta from Pico Rivera took $22,700, and Anna Caballero from Salinas accepted $16,700.

Democrat Angelique Ashby, a Sacramento City Council member, is one of the few top recipients of law enforcement money who isn’t already in the Legislature. She has taken $14,900 while Democrat Dave Jones – her most prominent opponent, a former legislator and state insurance commissioner – hasn’t reported any contributions from law enforcement. The fifth largest recipient so far is Republican Sen. Brian Jones of El Cajon, who has pulled in $6,000 in his campaign for the 40th District, while his opponents have reported no police donations.

Law enforcement unions invested about $2.7 million during the 2019-20 election cycle and more than $2.1 million in 2021 when Newsom faced a recall. With $1 million already contributed more than two months before the June 7 primary, it’s possible law enforcement groups will be even more generous in 2022.