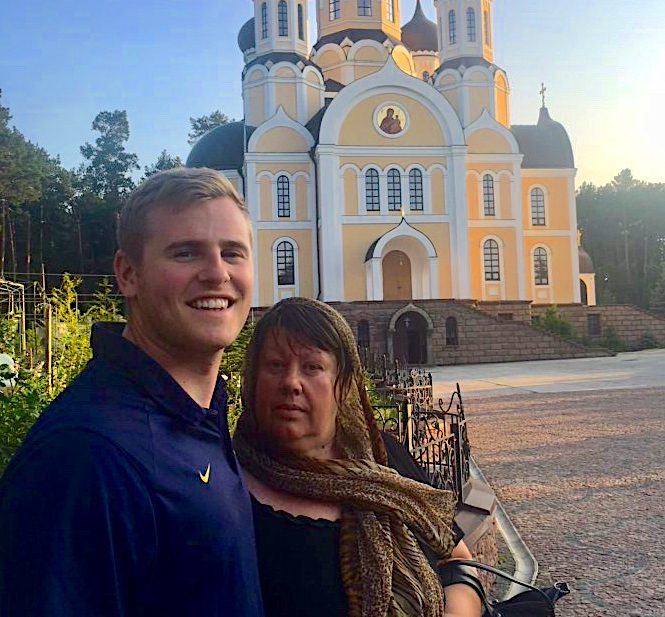 Craigie in front of St. Anastasia Monastery in Zhytomyr, Ukraine, with his host mother, Svitlana

Russia has invaded Ukraine. A nation is left to face the rage of a backward man with motives incomprehensible to — and incompatible with — our contemporary values and commitments. But as we watch this tragedy unfold from the West, our shared disbelief and sadness has gradually evolved into awe and admiration for the Ukrainian people as their acts of courage stream across our television screens and social media feeds.

I had the privilege to live in Ukraine for almost two years, and I’ve seen firsthand what the country will lose if Putin has his way. As I talk to my friends and host family who have been subjected to continuous Russian shelling for the past week, they understand that the difference between a liberated future and a subservient one is stark.

Though a nation still bearing a century’s worth of scars, Ukraine has fostered a rapidly growing democracy since the 2014 Revolution of Dignity; the realization of a dream that has long been forcibly withheld from them under generations of communism and Russian puppets.

Ukraine has finally built a nation where my friends and their 44 million countrymen have a voice. I have seen Ukraine become a place of true optimism: the optimism to start your own business and know your hard work will be rewarded, the optimism to participate in government and civil society with the passion of someone who feels truly empowered to better their community, and the optimism of a parent who knows their child won’t have to cross the border in order to reach their full potential. And now, with their nascent democracy and freedom under threat of extinction, the whole of Ukrainian society is showing the world they are willing to fight and die for the values we hold most dear.

As Americans, our reference point for the ultimate struggle for freedom is often the war our grandfathers fought in Europe 80 years ago. Former Soviet republics share this moral touchstone but take it even further. Anyone who has visited or read about a post-Soviet state knows there is a singular event to which their national pride is staked: The Great Patriotic War. The Soviet title for World War II is perpetually called upon and remembered as the moment the Soviet people, at great cost, saved the world from fascism. Though everyone still names and reveres their ancestors who fought and died to rid the world of evil, the Kremlin’s current claim as heir to the liberators of Europe is fraudulent. Decades of corruption, territorial conquest, and violent crime have rendered their rhetoric hollow. And now, not since the Great Patriotic War have we seen such a clear line drawn between what is right and what is wrong: an army acquiescing to the demands of an imperialistic thug fighting against an entire nation committed to preserving its newly-won liberty.

Putin says Ukrainians and Russians are one people — but unlike Putin, Ukrainians know their history and don’t need to reinvent it.

Furthermore, they know what they have right now could be fleeting. I recently spoke to a mother I know from Kremenchuk, a city of 217,000 straddling the Dnipro River in the middle of Ukraine. It was wholly leveled during World War II. She is a Russian speaker whose mother and entire family live in Russia. Meanwhile, her son is currently mobilized and fighting for Ukraine. After the invasion, she called her Russian family to tell them what was happening; she told them that they were being shot and bombed by Russian soldiers. Her family didn’t believe her.

Dismayed at the efficacy of Russian state propaganda but resolute in the face of rejection, she takes solace in the certainty that her Ukrainian compatriots are defending a democratic future: “We are on our own land and God is with us.”

2 thoughts on “Commentary | Ukrainians fight for their future”