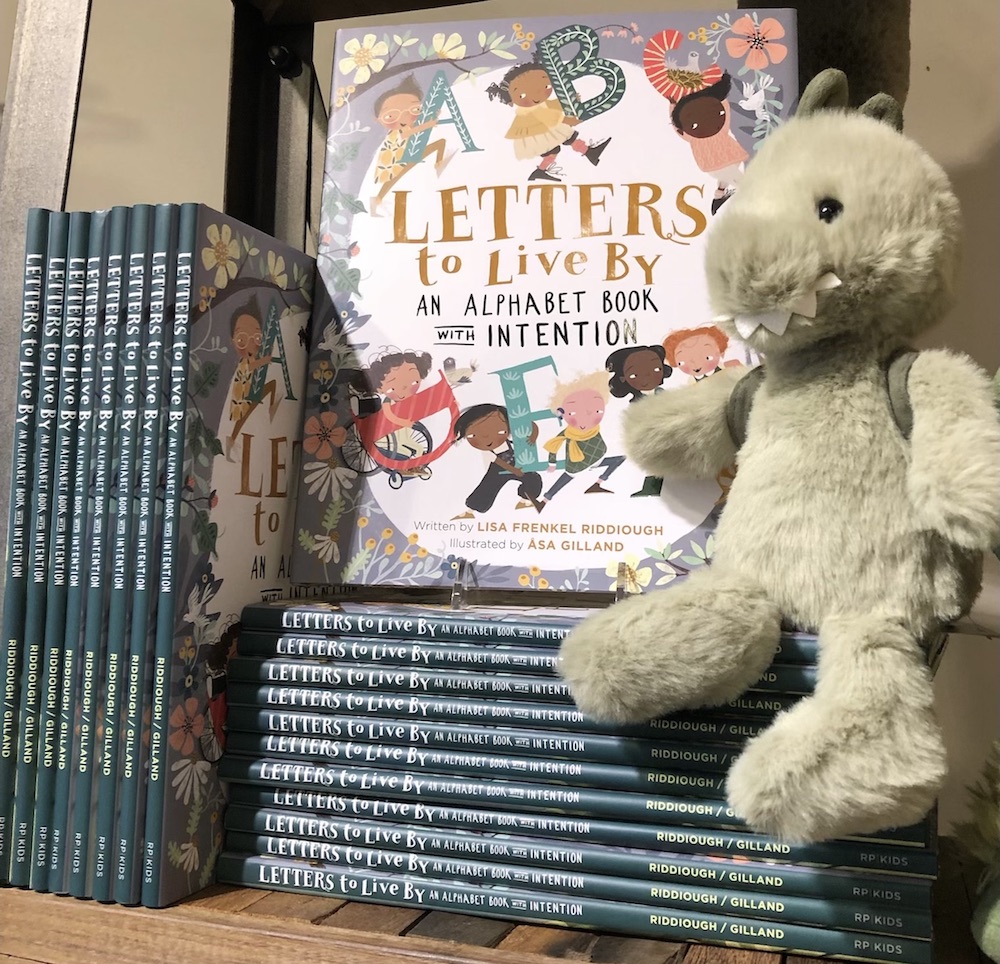 Writer, children’s book novelist (Elvis and the World As It Stands), and former Piedmont resident Lisa Frenkel Riddiough’s debut ABC picture book, Letters to Live By, presents the alphabet in 26, ear-pleasing alliterative word pairings. Vibrant illustrations by artist Asa Gilland bounce with exuberant energy as characters of every age, race and expression add depth and personality equal to the text.

Riddiough launches Letters to Live By with a conversation March 23 at Piedmont Center for the Arts and a book signing and celebration April 2 at Nathan & Co. Nathan Waldon, owner of Nathan & Co., says in an email the shop’s first-ever children’s book signing with Riddiough coincides with their 16th anniversary. “Lisa is a longtime friend and we’re excited to add Letters to Live By to our selection of children’s books. The book’s message is exactly what we look for when curating our collection.”

In an interview from her home in Sacramento, Riddiough says writing books for children continues to astonish her and teach deep lessons. The “surprise” arrives because as a young person, she was a reluctant reader. Deciding numbers were safer than words, she pursued a math-based career as a sales executive and says her experiences in the corporate world were “a series of good jobs.” When she finally turned to writing, it took her ten years—“a long, long road,” she says with emphasis—to journey from the idea to write a book to actually being published.

“The ‘ah-ha’ was finding that this is in my bones. I’m looking right now as we talk at my nutshell library and the handful of books I loved as a kid. They now have tape all over them and are missing their covers. By writing, I gave credence to that — finally.”

Credence and belief in herself as a writer, arrives in waves. It comes in part from the affirmation of having two published books (and a third, Pie-Rats! coming from Viking in 2024), but also in reflection. From her middle grade reader book, Elvis, Riddiough says, “I learned that I have faced my difficulties and found a way to move forward. I always thought, how am I ever going to move forward? I realized I had moved forward.” Other insights include one she says is “kind of ‘duh’” and obvious—when she hits a puzzling block in the process, the only way to solve it is to sit down and write until a breakthrough occurs. Another lightbulb moment is more profound: “All of the important life questions in the world can be found in middle [school] literature. Not necessarily the answers, but the questions are there.”

Asked if Letters to Live By offered equal “ah-ha’s,” Riddiough says that while composing and thinking about the essence of each word pairing, “I learned what I believe is important to me about being a human in the world. Finally, at age 50.”

With the authenticity she hopes shines through is an equal emphasis on brevity. The typically low word counts of picture books present a challenge, but also an opportunity to boil big ideas down into single or paired words.

Alphabetic “Untangle Untruths,” “Invite Imagination,” “Give Generously,” “Discuss Differences” and others can be read for face value, or serve as seeds for deeper investigation. Riddiough’s inspiration for the book was just such an exploration. One of her daughter’s teachers, Mr. Greenebaum, of Piedmont Middle School, coined as his weekend signature in notes sent home with his students the phrase, “Rest up, have fun, read something, and practice peace.” The “P” pairing stuck in Riddiough’s mind. She’d like to practice peace, she thought to herself. What other word pairs defined her life and actions?

“I wrote one draft,” she recalls. “That doesn’t mean I didn’t work on it over and over. I made a giant list of all the things that were important to me and then worked on the alliterative pairings. I looked at a dictionary to make sure I liked the words. After I showed it to my agent, I changed only one; the letter “M” went from “Make Memories” to “Move Mindfully.”

Writing mindfully for children she says means writing for accessibility. “We call it ‘the hook,’ but the kid isn’t looking for a hook. So the word selection that rings in their ears — that is a call to attention [which] is what I’m seeking. I want a phrase to ring and stay with them so they take it out into the world.” She admits to being motivated also by nostalgia for the sense of security and joy she felt as a child when her father would read to her. Although she doesn’t emphasize it, Riddiough’s books remind kids their words and actions are important and hold intrinsic value.

About her soon-to-be-released Pie Rats!, Riddiough says, “I have pictures in my head for everything I write, but I have no idea what (illustrator) Dave Mottram will do. He’s been doing rat studies on Instagram so I’m wondering! It’s a fun, funny, rhyming book with a refrain. I loved when I was little that I knew the ‘I don’t care’ refrain in Maurice Sendak’s Pierre. I’d say it every time, even before I could read.” The refrain for Pie Rats! she decides is best kept a secret for now…and then she slips in, “You can almost guess it. . . . I love it because it’s so simple and obvious and it makes me crack up.”