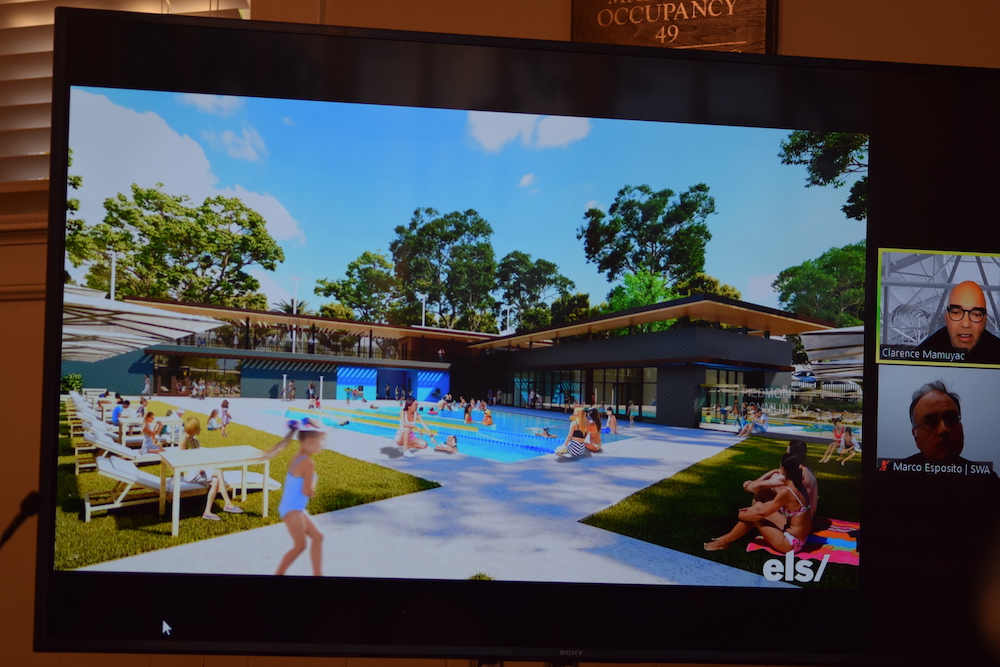 Clarence Mamuyac, president and CEO of ELS Architecture and Urban Design, shows the Piedmont City Council an image of what a single-story main pool complex building would look like.

In the face of fast-rising construction costs and a tight construction budget, the City Council on Monday unanimously authorized moving ahead with weighing changes in plans for the Piedmont Community Pool project, primarily eliminating most of the second story of the pool complex building and fast-tracking the project out to bid.

Plans for shortening the recreation pool lap lanes from 75 to 60 feet long may also be part of the process to trim at least $6 million from what has ballooned to a projected $25 million construction cost. The entire Community Pool Project budget is $24.5 million.

At its April 4 meeting, the council is expected to formally vote on these and/or other possible changes in the schematic design for the pool. The revisions are also expected to be a topic of discussion at Tuesday night’s Pool Advisory Committee meeting, which starts at 6 p.m. at City Hall, 120 Vista Ave.

Both the building design changes and an accelerated timeline to get the project to bid sometime in August (instead of October or November) were brought about by what city staff calls “construction cost hyperinflation,” which has resulted in construction costs industry-wide rising more than 1 percent per month in recent months, with no end to the cost increases in sight.

City Administrator Sara Lillevand said the pool project’s architectural firm, Berkeley-based ELS Architecture and Urban Design, designed a building at the Mountain View aquatic center that, this past December, received construction bids at $825 a square foot. In contrast, the cost estimate for the Piedmont pool project building as first proposed is more than $1,200 a square foot.

In order to get projected construction costs back to the previously established $19 million, ELS proposed eliminating the second story of the main pool building, including three conference rooms, and its elevator and stairway.

Clarence Mamuyac, president and CEO of ELS and a Piedmont resident, said the planned revisions call for part of the proposed lower roof to host photovoltaic cells that would create electricity for the pool complex, while another part of the roof would be an open-air “pavilion” that could be a gathering space or host art installations, possibly a public art piece.

A key motivation to making the building a single story, he said, is a spike in the price of construction steel, more of which would be needed to support a second story.

Lillevand said the changes, while “significant and disappointing,” are necessary. And while council members urged Mamuyac to find a way to restore the full 75 feet to the three recreational lap swim lanes, the other changes were seen as at least making the best of a bad situation, and more optimistically as trading one set of positives for another. The pavilion concept, especially, was praised by council members.

Mamuyac called the revisions “a solution to a very difficult situation.” And public commenters were largely complimentary of the plan’s revisions. Reid Settlemier called the changes “a really good compromise,” and urged the City Council to move quickly on whatever changes will be made before costs go up too much.

“The moral of this story is go fast – don’t wait,” Settlemier said.

Mamuyac also stressed that, even if the small-pool lap swim lanes end up being only 60 feet long, that the main pool — built to specifications for high school swimming and water polo competition — won’t change. He also noted that, even with three shorter lap lanes, the new pool complex will have twice as much water as the now-closed old pool.

“I think we have prioritized the water,” Lillevand said, “and that’s what the whole project started with.”