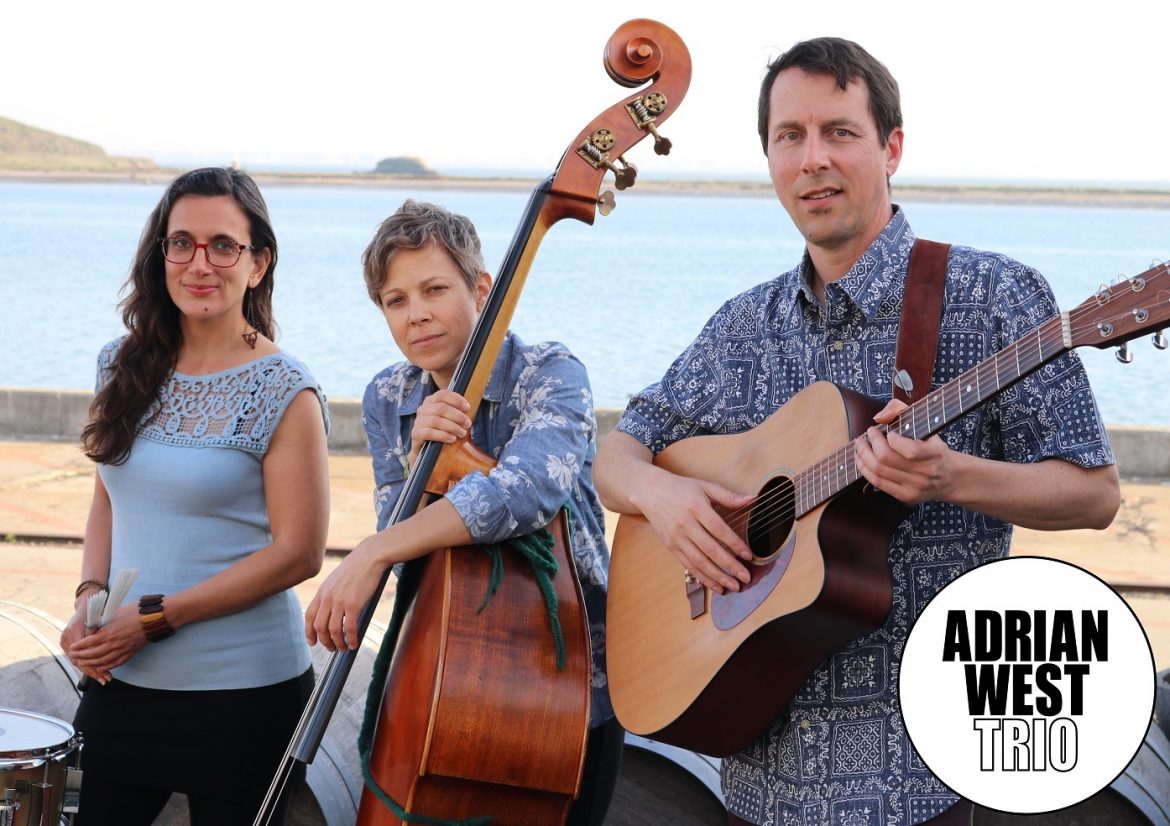 Fans of live acoustic rock ensemble performances have reason to cheer on March 5 when The Adrian West Band takes the stage at Piedmont Center for the Arts. Helmed by Oakland-based singer/songwriter Adrian West, who is also the band’s guitarist and classically trained on violin, the group will perform roughly 15 original songs mostly drawn from their two albums, Chameleons and Butterflies and The Human Touch.

West will be joined by vocalist and percussionist Amy Obenski and upright bass player Jodi Durst.

In an interview with the Exedra, West recounts how the band refused to take a complete hiatus during the pandemic. Finding safety in social distancing outdoors, the band that often includes a saxophone player and a drummer who will not appear at the PCA, set up once a month in a local park in Emeryville. “We played our music through our own PA system which we powered using a boat battery and an inverter I used to use when I played at farmers markets and street festivals,” he says. “We promoted these shows to our fans and they came and sat or danced far apart from each other and put tips in our jar and everyone had a great time. I also did a fair bit of writing and we recorded a few socially distant live performance videos which you can find on our website.”

Returning to an indoor stage—while following the PCA’s safety protocols that include proof of full vaccination including booster shot and proper masking—West says the final setlist is still in the works, then adds, “We plan for Amy to play the Center’s grand piano on at least one song.”

West, who was born and grew up in Montreal, follows the songwriting path of Paul Simon. “One defining feature of my original songs is that the music is always written first, before a single lyric is penned. At some point I will have chords and melodies for verses, choruses, a bridge, maybe an intro or an outro, and I know the arrangement, but I have no lyrics. At that point the song is like a fresh canvas with a very light pencil sketch on it and a lovely frame around it. To complete the work, a compelling and colorful picture is needed. That’s what the lyrics are for. Writing good lyrics is hard work, but having good music to write them to gives me a big head start and the conviction to finish the job and do it well.”

The subjects he writes about, in part because they are most often delivered with simple lyrics and poetic phrasing, offer a listener the opportunity to find a personal entry point. The songs also circle around universal themes: love, loss, the search for identity, confusion or resistance or acceptance relating to society and more. Speak Your Mind West says is about loneliness and how to avoid it. “The lyrics were inspired by a documentary I saw a few years ago about loneliness in the UK. The British Government actually created a Ministry of Loneliness for a while to help combat loneliness, particularly in seniors. Postmen were involved. I’m also drawing on my own experiences of being and not being lonely.”

Banana Smoothie is a song about a hardworking couple trying not to let their relationship be overshadowed by never-ending “to do” lists. Ice Cream On Your Cereal and Those Who Matter are about accepting oneself and others. In My Heart deals with unrequited love, Good Night Hemisphere expresses concern and hope for the health of the planet, and The One-Way Pony Ride asks if it’s true that time heals all wounds. The title song from West’s Human Touch album was written in 2016, but arrives with the last verse’s dark tones and a chorus leading to light that seem especially relevant after two years of pandemic anxiety and physical separation:

(Chorus)
So why, why even try
Try making heads or tails of the human race
The torn expression on its face
I’ve seen, it’s like a big machine
Be aware that you and I don’t count for much
But we can share the human touch mmm hmmm

West credits his band members for providing the group’s rich musical vocabulary and “flourishes that I would never think of.” In rehearsals, simple recordings of West singing the lyrics and playing his guitar find added color as the other musicians “fool around” with a simple chord chart and respond to the recording. The musicians value the interactions, the mistakes and the small triumphs—the elements impossible to reproduce with a computer or other “smart” device. In much the same way, people who come to the show at PCA will find reward in the human touch of live performance.

Tickets are $18-22 and can be purchased online HERE.