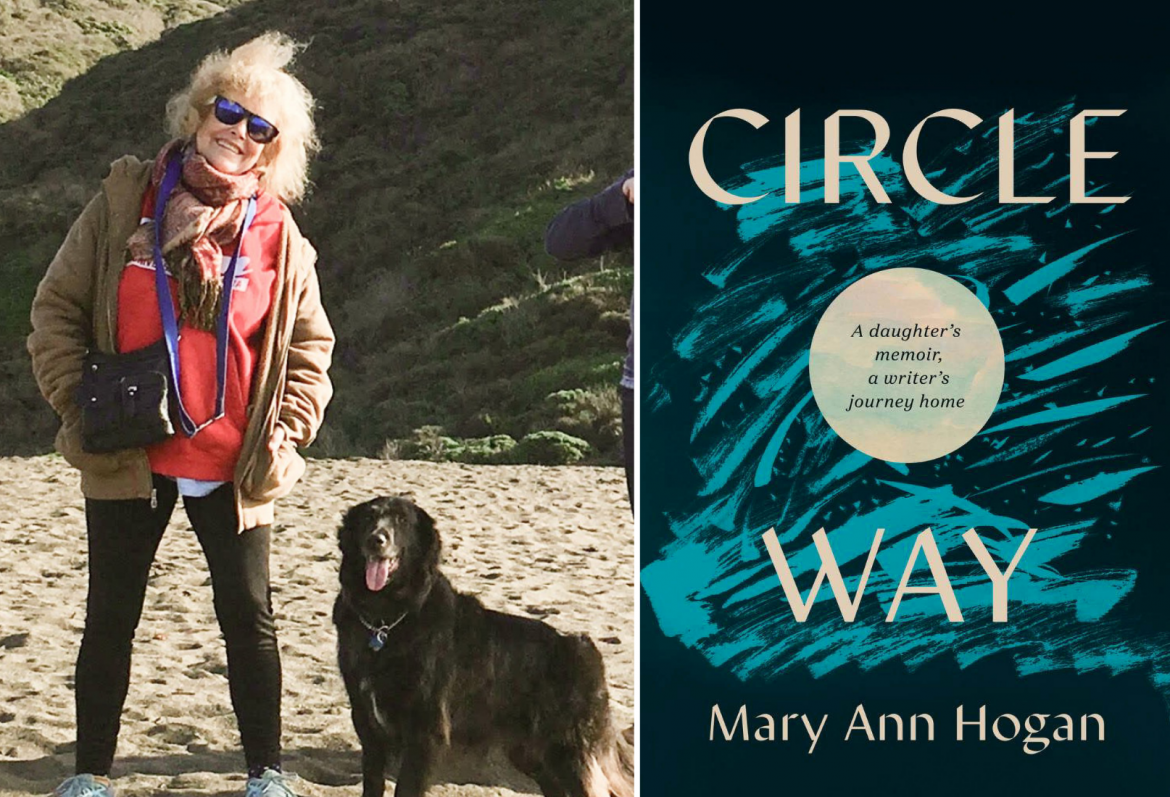 Mary Ann Hogan and her retriever Joe. (Photo courtesy of Freedom Forum Institute), and the cover of "Circle Way."

In an artful writer’s hands, a memoir can become an acutely intimate unveiling of sorts, a peeling back of time, circumstances and events that manages to zero in on the quintessence of an individual human life.

The late journalist Mary Ann Hogan’s highly unusual, poetic and evocative “Circle Way,” titled for the beloved Mill Valley home she grew up in and returned to in adulthood, accomplishes that and more. In lyrical, episodic chapters, each bearing keenly resonant titles, murky pictures emerge and then crystallize around not one, but four connected lives. Chief among them is that of her own father, Bill Hogan, a journalist and revered book editor for many years for the San Francisco Chronicle, whose gentle melancholy and feelings of inadequacy she is attempting to understand by poring through six clothbound notebooks of musings, notes, sketches, paintings and letters he left behind.

As the book’s subtitle, “A Daughter’s Memoir, a Writer’s Journey Home,” indicates, her probings are also an attempt to fathom what lies in her own psyche, her own hesitancies and misgivings, including the things that, she writes, “entered my marrow at birth.” So the memoir from this fourth generation Californian is also a family saga, narrowing in on her great-grandfather Hugh Hogan, a son of Irish immigrants who became a hugely successful lumber tycoon in Oakland before losing it all in the Great Depression. Also coming into focus is his son William, her grandfather, who failed his own family in the aftermath of that downfall, and a mysterious playboy great-uncle named Howard she never met, but whose somewhat notorious past and subsequent redemption came to mean a great deal to her.

Like her father Bill, Mary Ann, who died of lymphoma in 2019, was a highly respected journalist, syndicated nationally but best known here for her work on the Oakland Tribune and her community-based columns for the Marin Independent Journal. She intersperses her own prose in “Circle Way” with excerpts of writings and sketches she discovered in her father’s journals, and her remarkable gifts for language and imagery are immediately apparent on the first page of her “Prologue,” where she describes the wonder of encountering them:

“Reading the entries, studying the images, feels like prying open a shell to find the unpolished gem inside, an accident of beauty,” she writes. “The result of some poor mollusk’s fury to preserve himself, his haven invaded. A precious thing that began with an intruder, maybe small as a pebble, tiny as a grain of sand, maybe invisible, a mere molecule of pain whose origins run just beyond the tide of knowing.”

Her father’s persona slowly expresses itself through these excerpts, which are a revelatory delight — alternately mournful, wondering, wry, humorous and oftentimes expressing mild surprise (“Imagine that!” being one of his most frequent utterances). His daughter’s fond recollections of their time together amplify the developing picture of a man who was immensely talented but beset with doubt, deeply introspective but unremittingly kind and generous with others. She also probes how his complicated paternal heritage might have shaped both their lives.

An uncannily effective chapter titled “Eye of the Storm” near the end of the book interweaves an account of a horrific hurricane she lived through with her husband and two sons in South Florida with the story of a huge upheaval in the lives of the Hogans in mid-1920s Oakland — tumults in two time periods, both physical and emotional, that left marks on all their lives.

An element that renders this story even more poignant is that Mary Ann, who worked on the book over three decades, died before she could quite complete it. Its scene-setting foreword and its utterly moving final chapter, “Afterlife,” were written by a fellow journalist, her editor, admirer and longtime husband, Eric Newton. Always a partner in the enterprise she considered her life’s work, Newton describes their relationship at the beginning of his concluding chapter: “If we need a number, the Hogan-Newton partnership spanned five decades, my entire adult life and most of hers.

“I am her editor and she is my writer. Always. As writing partners, we season our stories like salt and pepper. I’m structure and function. She’s music. She’s magic.”