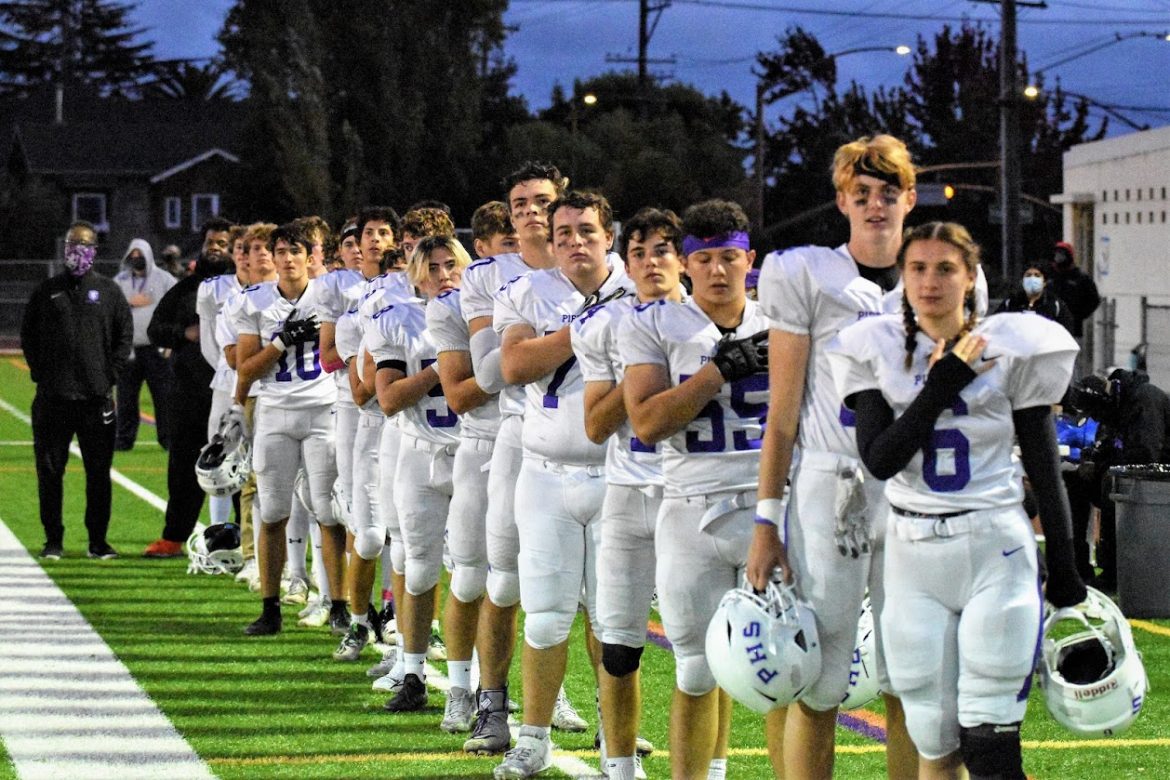 Piedmont football before the fall 2021 game against Berkeley

Meetings between families and Piedmont High School athletic director Bradley Smet have continued, but there has been no resolution as to whether there will be a varsity football season in the fall of 2022. Meantime, there may not be a league for a varsity football team to play in.

In the minutes from the AD meeting, which was held seven days after the final Piedmont football game of the fall 2021 season, “Piedmont reported that from a health and safety standpoint, they don’t have enough varsity level football athletes to have a program next year.” The minutes also state that the ADs made a commitment to guarantee Piedmont’s junior varsity program a full slate of games, and that the Highlanders would play in the Shoreline (lowest) division if they are able to field a varsity team for 2022.

Smet was at the meeting and made the request.

“Both myself and (principal Adam) Littlefield alerted the league that we had a very low number of returning student athletes in the football program,” Smet wrote in an email. “We informed them that if numbers did not improve that we would not be able to safely hold a varsity team.”

The Highlanders started the 2021 fall season with just 17 players on the varsity roster. The low numbers contributed to a 2-7 record after the previous team had gone 5-0 in the spring of 2021, a season delayed by the COVID-19 pandemic.

Littlefield was the school’s representative at the board of directors meeting, which was held online. The WACC board is made up of the principals of the schools in the league.

The minutes show two proposals being voted on to divide the WACC schools into three leagues. One of the proposals came from Castro Valley High and was seconded by Littlefield. The other came from the league’s athletic directors and was adopted by the WACC Board of Directors.

Neither of the proposals included Piedmont.

“We had low numbers this year and many of the students who were playing this year weren’t going to play next year,” Littlefield said. “Bradley didn’t see any possibility of us having a varsity team at that time.”

The WACC football schedule for all three divisions has since been approved by the league. Commissioner Dave Kiesel declined to answer questions about whether Piedmont could be added back into the schedule and what the deadline would be.

“Please contact the school for information,” Kiesel wrote in an email.

Smet said a varsity team can still be added back to the schedule, but it would take the approval of the WACC membership.

“Yes, it is possible that WACC can add Piedmont back into the league schedule,” he said. “Myself and Adam would present at the WACC AD’s meeting and WACC Principals meeting to be added back into the schedule. The league members would then vote on it at that time.”

Football schedules are generally worked out well in advance of a season. Leagues set up the round-robin part of the schedule, and teams then fill the other weeks with non-league games.

Parents learned on Dec. 20, 2021 in an email from Smet that former coach Jerome Johnson had been let go by the school. No process for hiring a new coach has begun. On Jan. 10, 2022 Smet held an online meeting with football parents. At that time, the future of the varsity program was discussed. A rift was apparent between parents of junior varsity and varsity players, with the junior varsity parents claiming there was a safety issue involving their kids being brought up to varsity.

Johnson had brought junior varsity quarterback Markos Lagios for the final varsity game, a 35-0 loss to Mt. Eden. Lagios’s parents were fully supportive of the move.

Smet has previously said that Lagios playing varsity is not the reason Johnson was terminated. Littlefield said there was “no connection to that dismissal” and the meeting on December 9 when the school removed itself from the WACC football schedules. Johnson did not return a phone call seeking comment, but previously said, “They just didn’t renew my contract, but there’s a lot more to it.”

Parents of varsity players are not happy with the situation, specifically the fact that the WACC schedules were approved before the process to keep football began on Jan. 10.

“PHS football players and parents remain very skeptical about a fall 2022 season,” said Mike McConathy, father of one graduating and one returning varsity player. “Looking at the conference schedule and the board minutes, it appears that Piedmont decided to cancel varsity football in early December. Principal Littlefield expected not to have varsity football as of Dec. 9.”

McConathy noted that Piedmont has asked students to let the school know their interest in playing varsity football multiple times in the past month.

“Early this week, the AD once again asked for player information to play varsity football, so we are still hopeful,” he said.

Smet said a survey was sent out in January to gauge interest in football. Fifty-nine students expressed interest in football at all levels. However, a follow-up survey sent to those prospective athletes yielded just 31 responses. On Feb. 7, parents submitted to Smet a list of 27 students interested in playing varsity football in 2022.

Smet said every potential player in each survey is being contacted to confirm interest.

“In the past we have had students state their desire to participate and then change their mind late in the process,” he said. “The purpose of the communication and surveys are to verify the commitment in the program to make sure we are offering the correct opportunity for those student athletes.”

If Piedmont doesn’t field a traditional varsity team, another possibility is a shift to 8-player football. Emery-Emeryville and John Swett-Crockett are two local schools that have done so in recent years. So did Branson-Ross, which went 10-0 last year.

However, the NCS 8-person football leagues have also issued schedules for fall 2022 already.

Littlefield said nothing has been decided and the school is looking at all of its options, including 8-person football.

“I don’t want to speculate if there is a decision for us to play 8-person football, that could be a one-year deal,” he said, but added, “We’re looking at options to do that. It would be more independent than a specific league.”

Smet said, “We are exploring all possible options, 8-person football being one of them if our numbers are too low to hold an 11-person team. The rules are different than 11-person football, which makes it more suited for small teams. I have reached out to many of the high schools in the area to ask for more information around their programs, in hopes of gaining a better understanding. If the decision is to participate in 8-person football next year, we would look to join a league to participate in.”

Smet continued: “Piedmont intends to provide a safe and successful football program. If Piedmont plays 8-person football, it would be for one year as long as the numbers in our lower grades do not dwindle. The current numbers of sophomores and projected freshmen will allow us to keep the JV team at 11-person.”