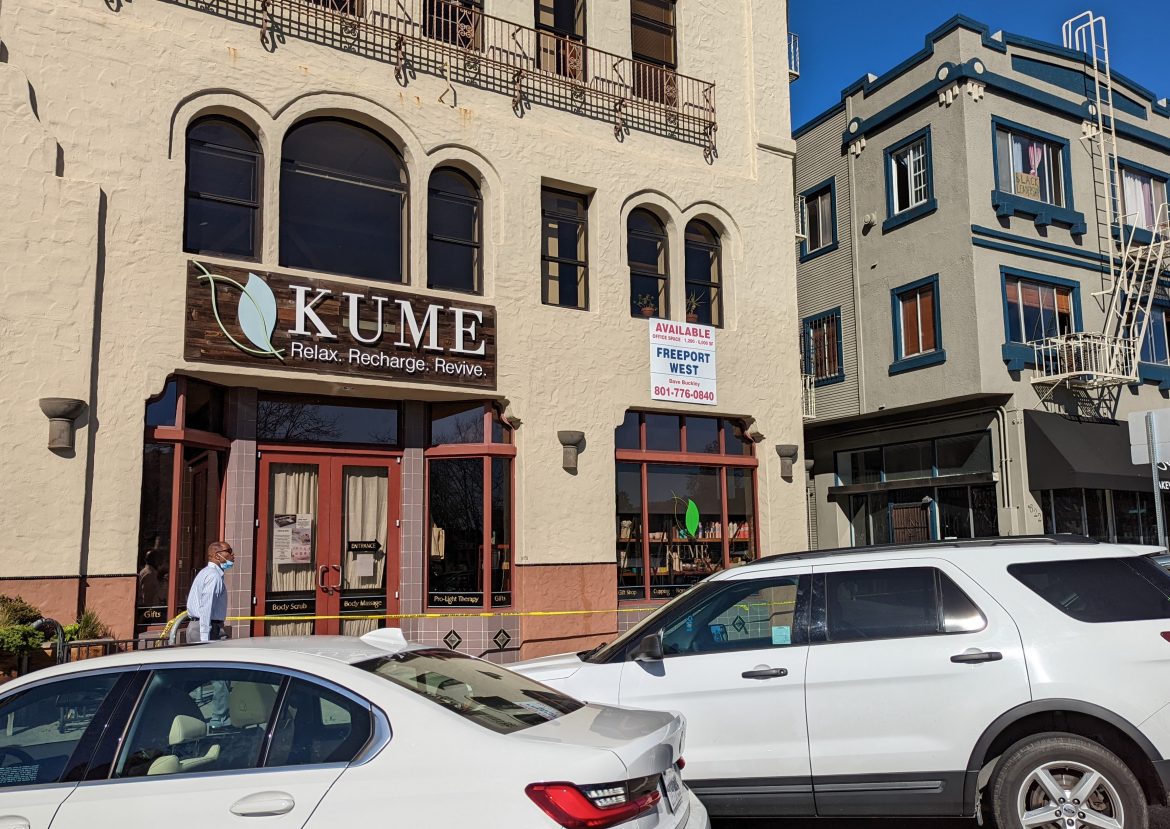 A pedestrian walks past Kume Spa, marked off with police tape, shortly after the fatal shooting Tuesday, Feb. 1.

This story was updated with more information from the Oakland Police Department Tuesday afternoon and Kume Spa Tuesday evening.

A Berkeley woman is dead and an Oakland man hospitalized in critical condition following a shooting at the Kume Spa on Grand Avenue opposite Eastshore Park Tuesday morning, Oakland police said.

The spa was not yet open for business for the day and no customers were present when the shooting took place.

“Right before 10 a.m. we received a phone call from employees inside the spa of a shooter inside, shooting at employees,” said Oakland police Lt. Brandon Wehrly.

Homicide investigators arriving at the scene found one victim, a man, at the back of the building suffering at least one gunshot wound and a second individual, a spa employee, who appeared to be the shooter. She had what appeared to be a self-inflicted gunshot wound to her upper body and later died at a local hospital, Wehrly said. Her name is being withheld until next of kin can be notified.

Preliminary investigation indicated the shooting was “not a random act of violence” and that there was no threat to the public in general, she said.

“We’ve interviewed other employees. We’re still trying to piece together if there’s something more” in the relationship between the shooter and the victim, Wehrly said.

The front window of car parked directly outside the spa belonging to the shooter was filled with signs and photos covering the front windshield accusing a former landlord of cruelty to dogs.

“We don’t know how it might be connected to this,” Wehrly said. “Right now we just don’t know what the motive is.”

Kume Spa told its clients it would close the Grand Ave. location indefinitely after the shooting. It sent the following message to its clients on Tuesday evening:

To our community and clients we are truly heartbroken by what took place at our Grand location this morning. This attack on our employees was devastating and traumatic for us. At this time we have decided it is best to close our Grand location until further notice so we can provide counseling and support to those involved. Please respect the privacy of our employees and families affected at this time. Thank you.