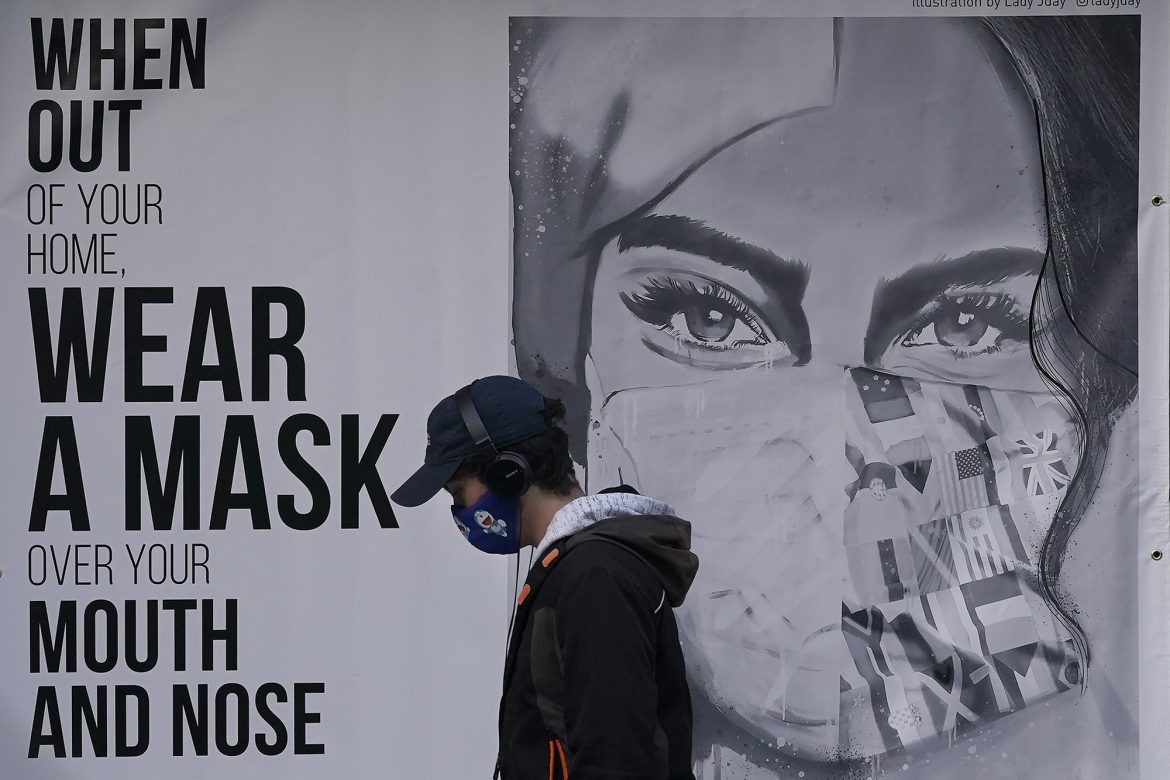 A pedestrian passes a mural in San Francisco during the first year of the pandemic that reads: "When out of your home, Wear a mask over your mouth and nose."

Nearly all of the greater Bay Area’s 11 counties will lift their indoor mask mandates next week, aligning them with the state’s plans to lift its mask requirements.

Alameda, Contra Costa, Marin, Monterey, Napa, San Francisco, San Mateo, Santa Cruz, Sonoma, and Solano counties and the city of Berkeley will all drop their requirements to wear a mask indoors, regardless of vaccination status, on Feb. 16.

Masks will still be required indoors for unvaccinated people ages 2 and up, as well as in health care facilities, homeless shelters and on public transit.

Masks are also required in K-12 schools, but state officials have indicated they are reconsidering school masking requirements and could make changes in the coming weeks.

State public health officials said Monday that the statewide mask mandate, which has been in effect since Dec. 15, would expire as the state’s COVID-19 case and hospitalization numbers have plummeted from the record highs of the omicron variant surge.

While relaxing indoor masking requirements is part of a population-level shift toward a “new normal” of living with the disease, the Health Officers recognize that essential workers and communities of color continue to be highly impacted by COVID-19 and will need additional support to limit widening health disparities.

Changes to health orders and recommendations may be updated as Health Officers follow the science and the data to evaluate whether additional protective measures may be needed as the virus evolves and if future surges occur.

The lone holdout among Bay Area counties is Santa Clara, with county health officials arguing lifting local indoor mask requirements would present an unnecessary risk to residents who are vulnerable to the virus.

Santa Clara County public health officials expect to lift most indoor mask requirements for vaccinated residents “in a matter of weeks,” once the county’s seven-day average of new cases per day falls below 500 for at least one week and Health Officer Dr. Sara Cody deems hospitalizations in the county to be “low and stable.”

As of Tuesday, the county was confirming an average of 1,922 new cases per day over the prior seven days.

Indoor mask requirements for all residents have been in place for much of the Bay Area since August, when health officials in seven counties and the city of Berkeley argued masking indoors would be necessary due to the highly contagious delta variant, which was starting to become the region’s dominant strain.

Masking rules remained in place across most of the region as the delta surge faded and the winter surge of cases tied to the omicron variant began.

In October, the seven counties and Berkeley issued criteria to lift their respective indoor mask requirements, including 80 percent of each county’s population completing their initial vaccine series and remaining in the lowest tier of viral transmission as determined by the U.S. Centers for Disease Control and Prevention for at least three weeks.

Ultimately, none of the counties or the city of Berkeley met their established thresholds.

On Wednesday, San Francisco health officials argued that those criteria were outdated, and meeting them would not be necessary for the city to safely align itself with the state’s indoor masking rules.

“We are able to take this next major step of removing the universal indoor mask requirement because we have laid a strong foundation in good public health protections and know we can prevent severe illness, hospitalizations and deaths,” San Francisco Health Officer Dr. Susan Philip said.

Health officials in all 11 of the greater Bay Area’s counties urged residents to get vaccinated against the virus as well as a booster jab when eligible.

Individual businesses and events will also be encouraged to require the use of a mask indoors if they consider it necessary, and residents are advised to wear a well-fitting N95 mask when a face covering is required.

New cases of COVID in Alameda County reached a pandemic peak of 267 per 100,000 residents per day on Jan. 10, county health officials said. Since then the case rate has rapidly declined.
Alameda County’s COVID-19 case rate declined to 91 on January 31 and has continued to drop rapidly. The county’s universal mask mandate has been in place since Aug. 2 when cases began climbing from the Delta variant, health officials said.