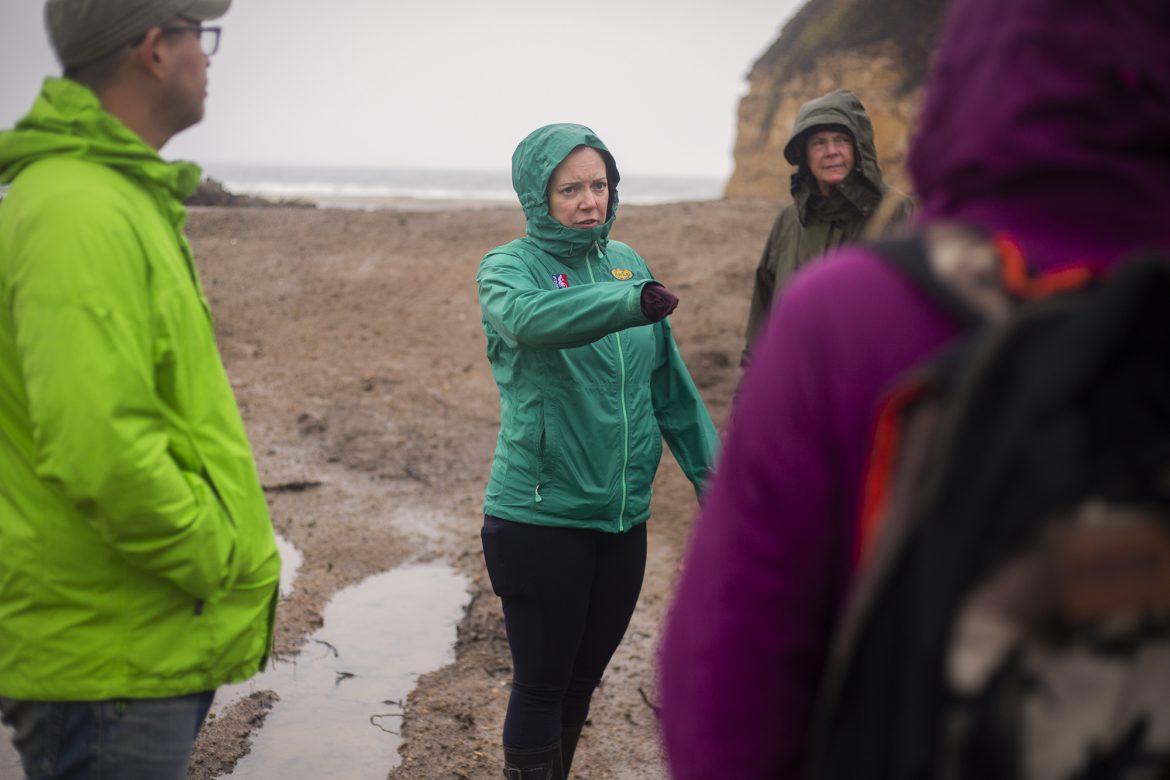 Christina Toms, an Ecological Engineer and Senior Scientist with the San Francisco Bay Regional Water Quality Control Board, (center in light blue jacket) checks up on a new wetland restoration project she has been overseeing for the last year in partnership with the Army Corp of Engineers, and the National Park Service at Drake’s Beach in Point Reyes on Oct. 21, 2021. Nina Riggio for CalMatters

One scientist working for the state of California drives for Lyft and Uber on nights, weekends and holidays to support his family in Sonoma County. Another manages the Berkeley building where he lives for extra cash. A third has been pushing for years to be reclassified as an engineer rather than a scientist — a change that could mean higher pay for the exact same work.

Scientists working for California are key to food safety, cleaning up hazardous waste and protecting wildlife, wetlands and water. Their work informs the state’s efforts to combat climate change, drought and wildfires.

Two years ago, two members of Gov. Gavin Newsom’s cabinet said scientists in their agencies were dramatically underpaid — earning less than their local and federal counterparts and state colleagues in similar roles who are classified as engineers.

Now the union representing staff scientists is back at the negotiating table after trying for nearly two years to update a contract that expired in July 2020. They’re seeking to narrow or close the gap with other state workers, like their colleagues in engineering.

Full-time rank-and-file state scientists on average earned 27% less than state engineers in 2020 wages — $83,586 compared to $114,012, according to a January state assessment. The engineers have a much larger union, with a bigger proportion of men.

About 78% of state engineers identify as men, according to a state assessment that included only binary genders. Among state scientists, the gender ratio is roughly even.

Pay rates for state employees who are not managers or supervisors are negotiated by their unions and the state Dept. of Human Resources, which works within limits established by the Department of Finance and the governor’s office. Lawmakers then vote to approve the contracts, which are signed by the governor.

As California’s lawmakers wrestle with how to spend the budget surplus, workers and environmental organizations warn: Fix the pay gap or risk undermining the state’s scientific ambitions and policy goals.

“I get to put on my little superhero cape every day and actually fight for a better California. And it’s a real privilege,” said Christina Toms, a state scientist working to protect and restore San Francisco Bay and other coastal wetlands that can combat sea level rise.

“I’m freaking terrified that all of these awesome people that I work with that are underpaid as (environmental scientists) are going to leave.”

Toms and other scientists interviewed emphasized they were speaking as union members, the California Association of Professional Scientists, rather than as employees of their agencies.

California’s disparity between scientists and engineers follows a national trend. Nationwide, the U.S. Bureau of Labor Statistics calculated that environmental scientists and specialists across the occupation earned $73,230 in median wages in 2020 — 20% less than environmental engineers, who earned $92,120.

In California’s agencies, scientists and engineers often work side-by-side on state projects. Both fields generally require high levels of specialized education and technical expertise, and non-partisan analysts and the state’s personnel administrators have noted overlaps between the classifications.

Hope Smythe, who supervised scientists, engineers and geologists and recently retired as executive director of the Santa Ana Regional Water Quality Control Board, said there is no clear distinction between their work that would warrant different pay.

In 2014, after a series of court battles, scientist supervisors received pay increases of up to nearly 43% that brought them more in line with their engineer colleagues. But among the rank and file scientists, subject to collective bargaining, a pay gap persisted.

Toms, who trained as an engineer and had worked as a consultant in environmental engineering, didn’t realize there was such a significant difference in pay when she applied for a permanent position with the San Francisco Bay Water Quality Control Board.

She has been trying to be reclassified as an engineer ever since, she said. For Toms, becoming a scientist for the state of California gave her an added sense of purpose — and “an absolutely gut-punching salary cut.”

The Professional Engineers in California Government union — which represents engineers and some geologists involved in shaping California’s infrastructure and technology, and protecting air and water quality — would not comment on the pay disparity.

At least part of the disparity could be linked to a gender pay gap. In a letter to the administration, members of the union wrote “​​for female, Black, Native, Latinx, AAPI, LGBTQ+, and other scientists of diversity, a severe and long-standing pay inequity between state employee disciplines represents simply another form of institutional discrimination.”

The pay disparity “feels like more of the same, always,” said Tricia Lee, a senior environmental scientist with the state’s Delta Stewardship Council who works to reduce threats to California’s water supplies.

“I think there continues to be a narrative that state scientists are doing less important or … less technical work, and therefore are less deserving,” she said.

Some research suggests that fields with a greater proportion of women pay lower salaries, possibly because employers “ascribe a lower value for the work done in occupations with a high share of females and consequently set lower wage levels.”

“Science was on the ballot,” California Gov. Gavin Newsom said after his victory in the September recall election. “We said yes to science.”

But members of his administration warned two years ago that underpaying scientists is compromising the state’s scientific endeavors.

The “dramatic… parity challenges faced by state scientists” threatens “the ability and capacity of CalEPA to fully implement its mission to safeguard California’s resources, products, food, and climate,” Environmental Protection Agency Secretary Jared Blumenfeld echoed in his own letter.

Some state scientists, such as chemists and epidemiologists, make more than the market average, according to a state assessment that included supervisors. But most are environmental scientists and specialists, who earn about 2% less in total compensation than the market average for public sector scientists in California and 8% less than federal ones. Their vacancy rate, however, falls slightly below the state’s.

Human resources department staff said the report compares median salary, which “would be centered on rank-and-file classifications.” But the scientists’ union disputes the analysis, saying it’s skewed by the inclusion of supervisors, who aren’t included in collective bargaining.

Environmental scientists in the pricey Bay Area — where nearly a fifth of state scientists work — face especially steep disparities, earning 23% less than their counterparts in local government, and about 41% less than federal scientists, according to the state assessment.

In 2019, 22% of 59 scientists in the Department of Toxic Substances Control, the State Water Resources Control Board and the regional water boards who responded to an informal survey said they held second jobs. Most said the pay affected their willingness to recruit others.

Chuck Striplen, who works in state and tribal intergovernmental affairs for an agency he asked not to be named because it doesn’t control his salary, holds a PhD, a master’s degree, two bachelor’s degrees and an archeology certification. His job involves protecting the state’s natural resources.

Striplen, who is based in Sonoma County, said he began driving for Uber and Lyft to supplement his pay and racked up thousands of miles of trips before the pandemic.

“You do what you gotta do to take care of your kids,” said the father of four, who is a California tribal citizen. “Having overcome the traditional barriers in education, in housing, to come into state service and be so woefully undercompensated because of a different form of discrimination — it’s just a bit of a morale killer.”

Kim Tenggardjaja, who works for the Department of Fish and Wildlife, said finding out she was making less than her engineer colleagues was disheartening.

“California is seen as such a forward-thinking state, and we are. But at the same time, there’s this huge lack of pay parity there,” she said. And not remedying it, she added, makes a statement. “It’s saying, ‘Well, maybe scientists don’t matter as much as we would like to have others believe.’”

Environmental and other science and health-focused organizations wrote to Newsom, asking him to address the pay differences, calling it a “moral issue” but also an “unsustainable situation” that could threaten important services.

Ortega, the director of the Department of Human Resources, and Newsom’s office declined to comment on the ongoing negotiations.

Toms said no one goes into state service expecting to get rich. But as science continues to be critical to combatting major challenges ahead for California, like climate change, she said:

“Californians deserve to have the best of the best working for them. And the way you do that is, you pay them.”