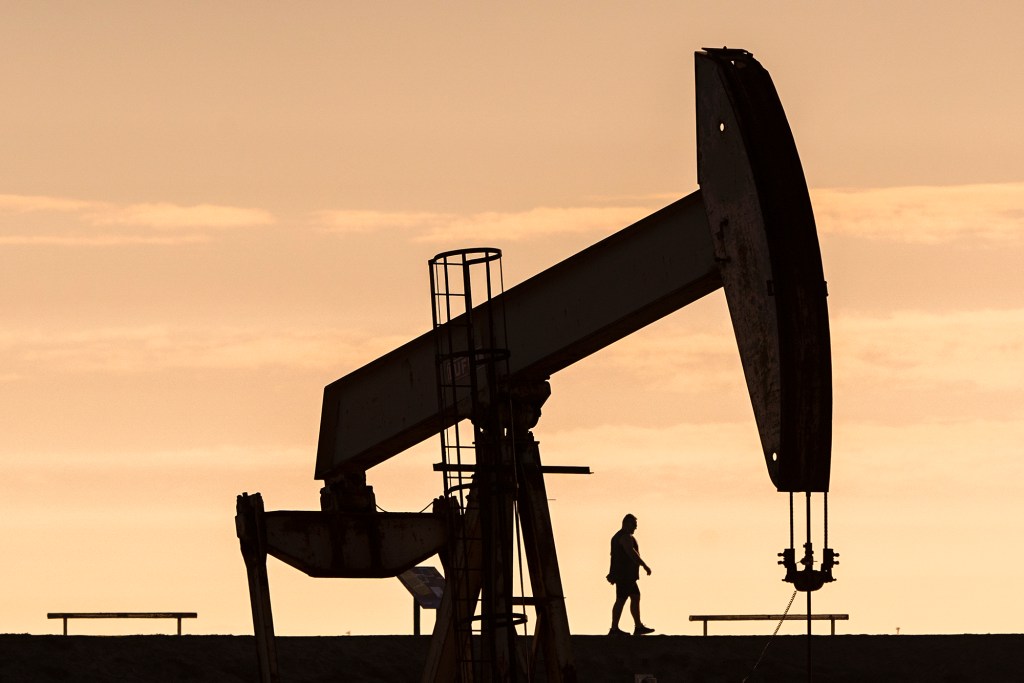 A man walks past an oil rig during sunset in Huntington Beach on Dec. 2, 2020. Ronen Tivony/REUTERS

A leading environmental lawmaker has proposed a bill that would create a state fund to support and retrain thousands of oil industry workers as California tries to phase out fossil fuel production.

The idea of guiding California’s 112,000 oil industry workers out of their current field and into other careers is often referred to as “just transition,” and is considered by policy researchers a necessary step to counter job losses as the state strives to reduce greenhouse gas emissions.

But even with a Democratic supermajority in the state Legislature, such a proposal faces an uphill battle because it’s pitting unions against unions.

Community and environmental groups say the state should start moving half the industry’s workforce out of oil fields, refineries and plants now in order to meet California’s goal of cutting 40% greenhouse gas emission by 2030. But a union that represents a portion of these workers has opposed efforts in the past.

The State Building and Construction Trades Council of California – known as the Trades – which represents labor groups that include Ironworkers, electrical workers and Teamsters, worry about losing good-paying jobs. Last year, The Trades opposed a bill that would have prevented oil drilling near schools and communities, citing job losses.

This time, however, the Trades is being countered by another group of unions including steelworkers, municipal workers and teachers.

Although the current bill doesn’t specify an amount, those unions hope the state will dedicate $470 million annually for wage subsidies and training to help workers move into the growing green energy sector.

Trades leaders say that beginning to dismantle the industry now will only push workers into lower-paid jobs. Instead, Trades officials say, the state should invest in big-ticket infrastructure projects such as high-speed rail and offshore wind projects that will create comparable jobs to what workers have been doing for decades.

Assemblymember Al Muratsuchi’s bill exposes a rift among labor unions on how the state should address the transition to a green economy at a time of growing income inequality and fewer well-paying jobs for middle-class workers.

It also puts labor’s main organizing body, California Labor Federation, in an uncomfortable position after Steelworkers requested that the organization convene “labor to labor” talks on the subject. Both sides say talks haven’t happened yet.

Messages left for the Labor Federation and its new incoming leader, former Assemblymember Lorena Gonzalez, were not returned.

Green economy researchers say the state needs a clear plan for oil-industry workers otherwise the transition will be left to corporations, which are unlikely to provide financial support or offer laid-off workers a path to new careers.

Those workers labor on oil derricks spanning the Central Valley that pull 169,211 barrels of crude oil from the ground a day. They oversee the import and export of crude oil and petroleum along the ports of Los Angeles and Long Beach. And they fix pipes and repair machinery in refineries that convert 1.7 million barrels of crude into petroleum, such as Chevron’s refinery that looms over the city of Richmond. California has the third-largest refining capacity in the country.

While two-thirds of workers have less than a bachelor’s degree, they work in positions with an average compensation of $130,000 a year. The majority have health insurance and retirement benefits, while 23% are unionized. That’s far higher than the green energy industry, with an average salary of $97,000, and lower rates of unionization and benefits, according to a labor-funded just transition report.

“We are not used to saying, ‘In 10 years, five refineries are going to be gone. What should we do?’” said Carol Zabin, director of UC Berkeley’s Green Economy Program. “We don’t really know because it’s all left to private enterprise.”

Without a statewide plan, funding and timeline to support oil workers, she said, a just transition “sounds like an invitation to a fancy funeral.”

Muratsuchi, who represents parts of the South Bay region of Los Angeles, had proposed to create a just transition advisory commission, which would have been tasked with coming up with a plan by 2024. Even though he allocated some of the commission’s 13 seats to the Trades and oil industry, the bill died in committee last month.

“That was the lesson I learned,” Muratsuchi said in an interview. “In order to advance any plan for a just transition, we need to have buy-in and support of labor.”

Now, his latest proposal is being backed by some labor unions, including teachers and municipal workers.

Newsom’s 2022 budget proposal allocates $50 million to support displaced oil and gas workers – a fraction of what labor wants – and adds $450 million to a Community Economic Resilience Fund, which was set up using federal stimulus money to help communities recover from the pandemic.

A spokesperson for the governor said that the administration is “continuing to advance strategies that create jobs throughout the state.”

“It’s going to take strong and bold action to find the money and make the investment,” Brieger said.

While few details of Muratsuchi’s new bill have been hammered out, the legislation is intended to establish a Just Transition Fund, which would offer wage compensation, pension guarantees, healthcare, relocation funding and retraining programs to former oil workers.

The idea is based on a 12-year, just transition roadmap to shutter half of California’s oil industry by 2030. The roadmap was developed by Robert Pollin, an economics professor at the University of Massachusetts Amherst and a leading expert on just transition policy. The report was commissioned by the California Federation of Teachers, Steelworkers Local 675 and the American Federation of State, County and Municipal Employees Local 3299.

Experts say the closure of the oil industry will have wide-reaching implications – including large swaths of communities out of work and cities losing millions in taxes and fees from oil companies.

Both labor camps agree the state should have a role, but disagree over what that role should be.

While the Trades want the state’s commitment for massive infrastructure projects to sustain their members’ professions, they oppose deadlines to dismantle the industry. Last year, the Trades opposed the Climate Crisis Act that would have codified Newsom’s commitment to net-zero emissions by 2045. The bill died in the Senate after 18 Democrats voted against the bill or abstained.

The 19 unions that have endorsed Pollin’s roadmap also call for $70 billion annual investment from the state in green infrastructure, but ask for an additional $470 million annually for temporary wage subsidies and health insurance, and retraining programs to move oil workers into guaranteed green jobs.

To Campbell, it offered a window into California’s carbon-neutral future.

“We are reading the handwriting on the wall as to what will happen to these refineries,” Campbell said. “We’re looking at the future and trying to come up with some sort of a game plan.”

But the Trades worry that, until there’s enough green energy sources to supply the state’s population, these policies will only disenfranchise workers, many of whom only have a high school diploma to fall back on.

“It’s an offensive and classist notion that we are going to retrain blue collar workers to do something different,” said Erin Lehane, a Trades spokesperson. “The policy should be focused on creating opportunities in the industrial sector.”

While the Trades support the state’s move away from fossil fuels, said Lehane, a premature closure will lead to “further outsourcing our energy needs in California to other places that don’t have as strict labor laws.”

The oil industry has similar concerns, said Kevin Slagle, spokesperson for the Western States Petroleum Association, an industry lobbying group. Nearly half of the oil refined in California comes from foreign sources, according to the California Energy Commission.

But California is also the largest importer of electricity, according to the US Energy Information Administration, with a quarter of its power coming from other states, including power plants in Arizona and Utah.

Still, Slagle said that if environmentalists and lawmakers stopped villainizing the oil industry, “there’s a conversation to be had,” and that Muratsuchi’s new legislation could offer a starting point for the discussion.

It remains unclear whether the bill will find enough support among Democrats, or whether both labor camps will come to an agreement. Senate President Pro Tem Toni Atkins declined to comment about the just transition bill and Assembly Speaker Anthony Rendon did not respond to requests for comment.

“The building trades are not our enemies,” said the Steelworkers’ Campbell. “It’s just that we need to get everyone on the same page so that the future is one that’s prosperous for all and not just prosperous for a few.”

This article is part of the California Divide project, a collaboration among newsrooms examining income inequality and economic survival in California.