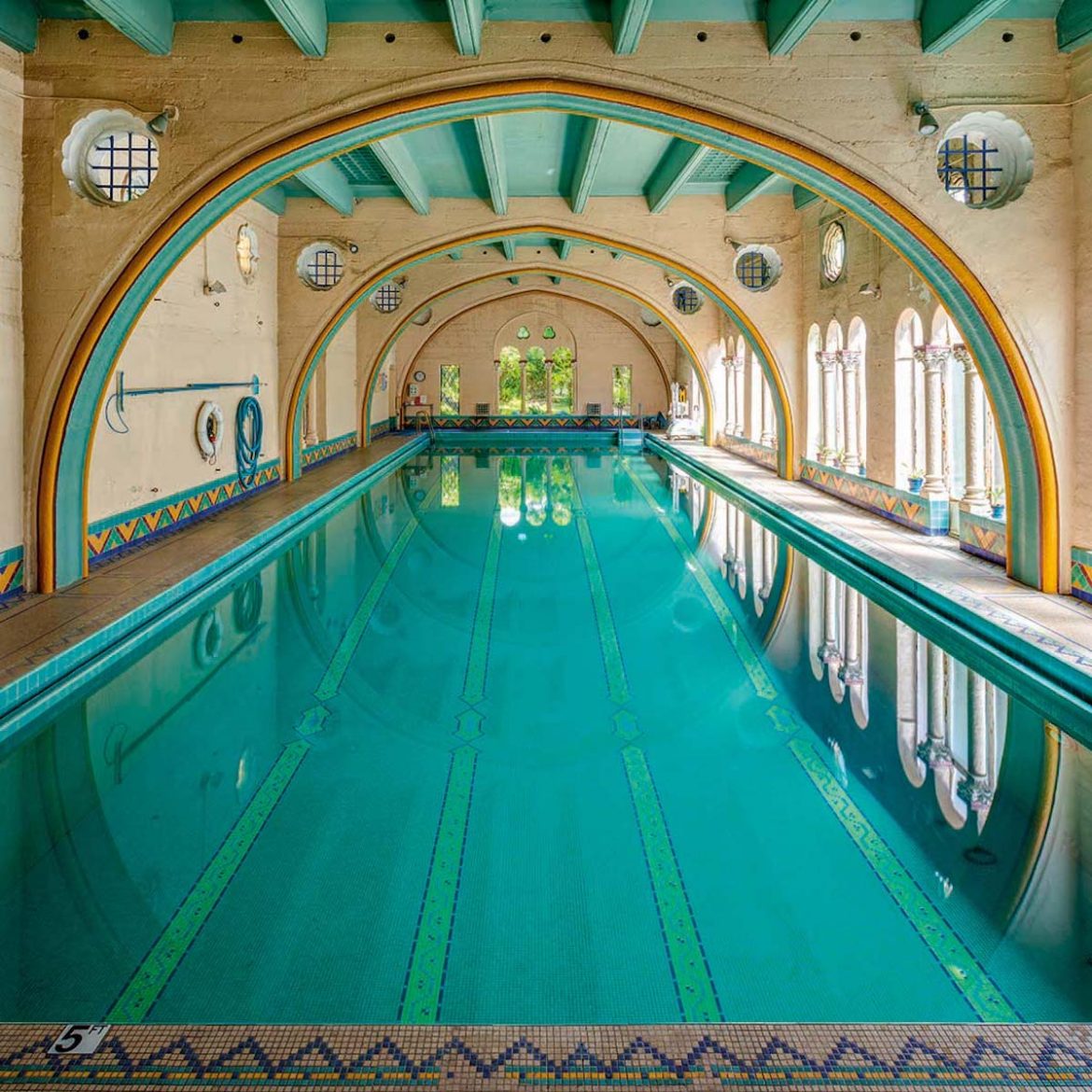 The indoor pool at the Berkeley City Club takes us back to another era. Originally the Berkeley Women’s City Club, architect Julia Morgan’s “Little Castle” at 2315 Durant Ave. was one of her favorite designs.

Ask a Bay Area resident if they’ve heard of architect Julia Morgan, and chances are they will either say no or, more commonly, “Why does that name sound familiar?”

Morgan’s name is familiar because she has deep roots in the Bay Area going back 150 years. Born in San Francisco in 1872, she was the first female licensed architect in California.

We are surrounded by her artistry when we see a show at her namesake Berkeley theater, go for a swim at the Berkeley City Club or attend a funeral at Oakland’s Chapel of the Chimes. We’ve seen her grandest work at Hearst Castle in San Simeon — publisher William Randolph Hearst’s “country house” that she designed with its opulent rooms, swimming pools and décor inspired by the Spanish Renaissance.

Morgan’s ties to the Bay Area and her friendship with Hearst are just a few of the windows that author Victoria Kastner opens for readers in “Julia Morgan: An Intimate Biography of the Trailblazing Architect” (Chronicle Books, $32.50), available Tuesday. The book, which features gorgeous, full-color images of Morgan’s designs, also reveals much about her Paris education, her family life, her attitudes and her passions.

By the end of Kastner’s book, Morgan feels close and dear. And we also understand how this prolific architect, who designed 700 buildings in her lifetime, could fade into obscurity after her death in 1957.

Kastner’s book was 30 years in the making — it’s an exhaustive historic record that taps thousands of Morgan’s own letters (she saved everything), interviews with family and friends and Kastner’s own exposure to Morgan’s work.

Kastner visited Hearst Castle for the first time in 1978, in spite of reviews that called it a gaudy mishmash, she says.

“Once I saw San Simeon, I never left,” Kastner says. She worked as a commercial baker in Los Osos until she landed a job giving tours at Hearst Castle in 1979. She eventually became the park’s historian, and between 1998 to 2013, she wrote three books on the Castle’s history. She left Hearst Castle in 2018 so she could work full time on Morgan’s biography.

From the beginning of her journey at Hearst Castle, Kastner found it shocking that the person who built this incredible place was so invisible to the world. People told her, “a woman built this place, and nobody knows anything about her,” Kastner says.

Morgan’s disinterest in self-promotion was partly to blame. She was a workhorse with a laser-beam focus on her clients and her work, and she avoided interviews. She believed that “architecture is an art of form, not an art of words,” Kastner writes.

Morgan thought “the building should speak for itself.” She managed to be an epitome of modesty who toppled the walls of misogyny and social norms that were everywhere in the 1900s. There is no evidence that she ever had a romantic relationship with anyone — man or woman.

Her one true love was her work, and she challenged the majority — even her own mentors — who thought she could make a good “behind the desk” architect. Women cannot “climb scaffolds to oversee the work or come in contact with the laborers or mechanics …,” Morgan’s mentor Francois-Benjamin Chaussemiche said in a 1901 Evening Mail piece titled “Oakland Girl to be Architect.”

Morgan got around every obstacle. She wore men’s trousers under her skirt so she could climb when she needed to, and jackets with big pockets (a purse would just get in the way). She has been criticized for not having one distinct architecture style, and maybe she didn’t. Instead, she borrowed styles from other nations and eras and, in doing so, handed us a gift that will charm us for generations.

Throughout her book, Kastner weaves in Morgan’s other life passion: her family. She was a caretaker to her parents and siblings in good times and through many tragedies. She cared deeply for people. In 1924, when her elderly mother Eliza — who was resistant to change — needed more care than she could give her, Morgan built another house with a nurse’s quarters near her sister’s home in Berkeley. After Thanksgiving dinner at her sister’s house, the family walked the elderly woman into her new space that Morgan had designed to be identical to the home she knew. Eliza never realized that she had moved, Kastner writes.

Through it all, Morgan expressed her heart and mind in journals and letters — that’s how Kastner helps us get to know her.

“At first, I was reticent to write the book because she was such a private person,” Kastner says. “But then I decided that when someone saves as much as she did, they are likely thinking about posterity.”

Victoria Kastner’s “Julia Morgan: An Intimate Biography of the Trailblazing Architect” ($32.50) is available starting Tuesday from Chronicle Books at https://www.chroniclebooks.com/products/julia-morgan-an-intimate-biography-of-the-trailblazing-architect.