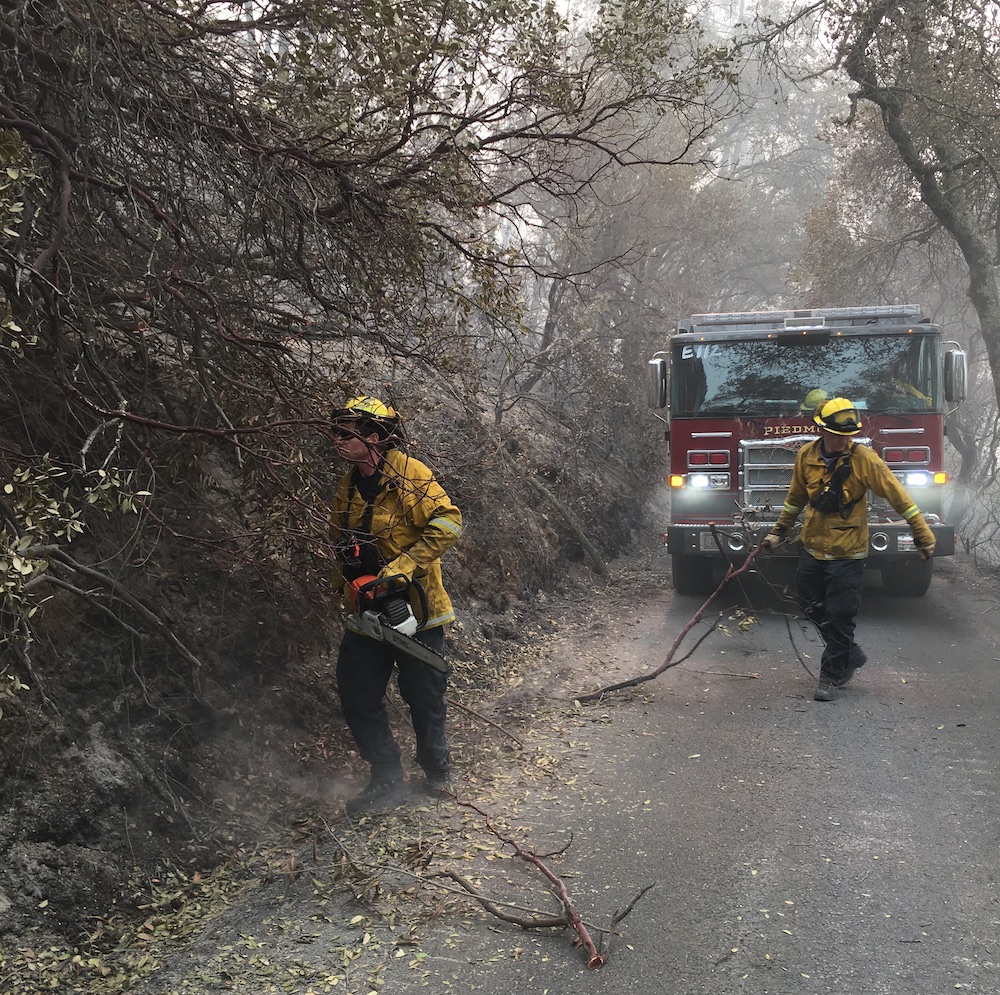 A Piedmont Fire Department crew helps with the October 2020 Glass Fire that burned in Napa and Sonoma Counties.

The hills in and around Piedmont are green and lush for the moment, not very combustible, not presenting a danger of fire. Yet.

But after a wet December, the Bay Area got virtually no rain in January, and the longer that continues, the more likely it is that the local greenery will fade to brown, dry out and become a potential tinderbox sooner rather than later.

Piedmont’s Fire Chief David Brannigan is playing close attention to how this is all playing out. With winter weather conditions, it’s too soon to make predictions about how dire the threat of wildfires in the Oakland hills — and in nearby Piedmont — will become in 2022, he says.

But it’s a fact the Piedmont fire chief and other area fire officials are bracing for another taxing fire season, and Brannigan said that Piedmont residents can’t afford to ease up on fire safety despite so much rain in December.

“We’ve had an extended period of years of below-average rainfall — and dead trees, unmanaged underbrush, dry soil — it would take a month of constant rain to change things,” said Brannigan. But if current rainfall trends — that is, almost none — continue, Piedmont and the Oakland Hills could be facing yet another high-danger summer and beyond.

Preparing for wildfire figures to be an all-the-time proposition in the foreseeable future, a consequence of climate change.

Brannigan said it’s private property owners’ responsibility to clear excess vegetation from their property, and that clearing vegetation from up against homes and other buildings is particularly crucial.

A good rule of thumb is that there should be nothing flammable that lets fire move from the ground to the (building) roof to the tree canopy,” he said. Other key preventative measures include replacing wood-shingle roofs with materials like clay and masonry, and installing spark arrestors on roof vents so wind-blown burning embers don’t drift through open windows or vents. Replacing old, dry wooden decks and fences with those made of composite materials can also help “harden” homes and surrounding structures from fire danger, Brannigan said.

The City Council in March 2020 placed the entire city within a “wildland-urban interface fire area,” acknowledging the increased risk presented to homes by the proximity of flammable vegetation common to undeveloped areas. Five months later, the council adopted a “very high fire severity zone” map developed by state fire officials that includes the southeast section of Piedmont near Park Boulevard, St. James Drive, and Tyson Lake, as well as surrounding parts of Oakland. Property owners in this area must meet higher vegetation management standards than in the rest of the city, because the fire danger there has been deemed to be higher than in other parts of town.

But Brannigan stresses that vegetation is enforced citywide, although he is unsure whether these designations have resulted in significantly higher home and fire insurance premiums.

Brannigan says a windstorm like the one that knocked over trees and power lines all over Piedmont on Jan. 20 could have fed a devastating wildfire had the fuels that are now green and moist instead been brown and dry.

The Piedmont Fire Department website offers tips on preparations homeowners can take to prepare for wildfires, and to “harden” a home as much as possible from fires. Brannigan urges all Piedmont residents to sign up for AC Alerts warning of fires or other emergencies, and to email cityclerk@piedmont.ca.gov to sign up for City Council e-notifications.