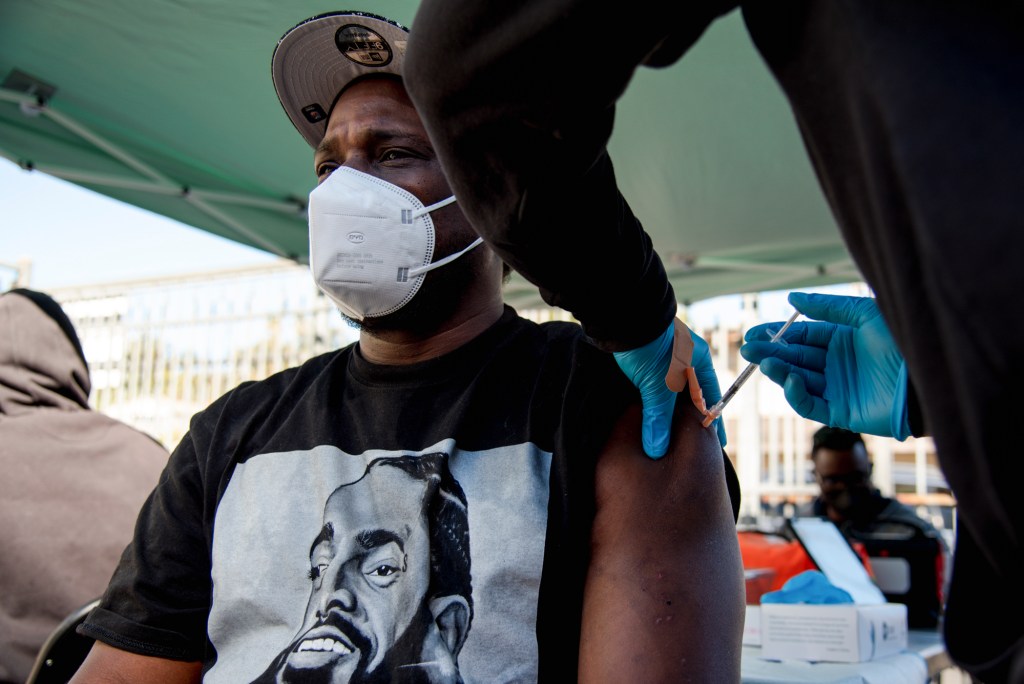 George Dowell, 40, receives the COVID-19 vaccine at Umoja Health pop-up clinic in Oakland last week. He waited a year to watch for any side-effects or problems in his vaccinated friends. Photo by Marissa Leshnov for CalMatters

Deondray Moore sat in a plastic folding chair, rolled up his sleeve and got his first COVID-19 shot in the parking lot of Center of Hope Community Church in Oakland a week ago. He was the last in his family to get vaccinated after putting it off for more than a year, and only acquiesced because he wants to be in the delivery room when his son is born this summer.

“My mom has been trying to get me vaccinated forever, since the (vaccines) came out,” Moore said. “My partner got it quick, and her kids got it as fast as they could. She wasn’t playing around. She was like ‘Don’t miss out on the baby.’”

The 35-year-old Oakland native, an African American, knows multiple people who have contracted COVID-19 and died. Moore wears a mask and doesn’t go out much. But he’s suspicious of the vaccine and the way it was developed. “I just don’t trust the government,” he said.

African Americans, who have a litany of historical reasons to mistrust public health officials and doctors, have the lowest vaccination rate in the state, at 55%.

COVID-19 has become deadlier for Black Californians since the widespread availability of vaccinations, and vaccine hesitancy could be among the reasons why. Other races, which have higher vaccination rates, have seen death rates rise, but not as dramatically.

A CalMatters analysis shows since last summer, the rate of Black Californians dying from COVID-19 has increased tenfold — from one death per 100,000 people last July to 10.4 deaths this week. That surpasses Latinos and all races except Pacific Islanders, who are dying at the rate of 14.7 per 100,000, according to state data.

And while statewide deaths from COVID have declined in the past week, they have continued to rise for African Americans.

So far, 5,544 Black people have died from the virus in California.

Dr. Kim Rhoads, an associate professor of epidemiology at University of California, San Francisco, said she isn’t surprised by the growing death rate among African Americans. “Disparities aren’t new. They aren’t new to COVID,” said Rhoads, who helped organize the community clinic where Moore got his shot.

For some Black residents, the disparity grew worse after vaccines became widely available last summer, according to a study from UC Santa Cruz and UC San Francisco researchers.

Middle-aged Blacks make up a growing, disproportionate share of the Californians who died, while the proportion shrank for Latinos and others: In March 2021, Black people aged 40-64, who make up roughly 5% of all middle-aged Californians, accounted for 6% of COVID-19 deaths in that age group. But a few months later, their numbers skyrocketed, accounting for 21% by last July, according to the study.

In contrast, middle-aged Latinos accounted for 66% of all COVID-19 deaths at the beginning of March 2021, but then last July shrank to 30%, mirroring their proportion of all middle-aged Californians.

So why did the vaccines apparently help Latinos but not Black Californians? It’s possible that those who are most at risk of dying from the disease aren’t getting vaccinated. Younger African Americans also may not have been included in early vaccination campaigns or may have felt they weren’t at risk of severe illness or death.

“What’s puzzling to me is that they have a really different story in terms of who’s dying,” said Riley, a UCSC assistant professor of global and community health. “Are the people who were at risk of dying in the Latino community actually being reached with vaccination, whereas somehow that’s not happening for Black Californians as effectively?”

Experts say myriad other factors could also be driving the trend, including poverty, lack of insurance, distrust of the health care system and higher rates of health complications like diabetes or heart disease.

The increased share of deaths for Black Californians is a powerful sign of “who was left behind when everyone else was kind of moving on out of the pandemic,” Riley said.

The study did not find significant differences for other age groups, although state data suggests Black children fare worse than other races, too.

The drivers for African American deaths are likely deeper than vaccination disparities.

“If we just say comorbidities, then we’re blaming the victim number one and we’re washing our hands of any responsibility,” Rhoads said.

Vaccine campaigns successful for some

Substantial gains have been made among Latinos, according to Riley’s study. After bearing the brunt in the early stages, Latinos’ death rate dropped from nearly 25 deaths per 100,000 people in January 2021 to 1 death per 100,000 in July. Over the last month, the California Department of Public Health estimates 7.2 Latinos died of COVID per 100,000 people, lower than the statewide  rate of 8 per 100,000.

Around June 2021 the percentage of fully vaccinated Latinos outstripped Blacks and Native Americans, leaving Blacks in last place. Only 57% of Latinos are fully vaccinated, but some hard hit agricultural areas like Imperial County were quick to accept the vaccine — and it has made a difference.

“Over 34,000 California Latinos have died since the beginning of the pandemic,” Garcia said. “It touched people close to home. I think that also created an impulse for people to get information from reliable sources and get the vaccine.”

Rhoads said refocusing COVID-19 vaccination messaging on preventing deaths rather than infections is important for equity, particularly since getting her community to trust the vaccine has been harder.

“It’s about a historical relationship between Black people and public health and health care,” Rhoads said. “Instead of saying lack of trust, I’m saying there’s no relationship there, so there should be no expectation of trust.”

That trust was further shaken last spring when the Food and Drug Administration warned of rare but severe side effects associated with the Johnson and Johnson vaccine. Rhoads said the number of people seeking vaccinations at her clinic dropped precipitously.

To help bridge the gap, Rhoads founded Umoja Health, a collective of community and faith-based organizations in the Bay Area, to make COVID-19 testing and vaccination easy and accessible for African Americans. They bring pop-up clinic supplies to churches, schools and neighborhoods where they know vaccination rates are low. It takes patience and continued effort, Rhoads said.

At Castlemont High School in Oakland, where the clinic frequently sets up shop, it was several weeks before many Black students trusted them enough to get the vaccine.

“The Latino students came immediately,” she said. “But as we’ve been there over time, we’re starting to see more and more of the African American students come through, and then we started to see people bringing their parents.”

‘Back to normal’ threatens Blacks and Pacific Islanders

Gov. Gavin Newsom’s recent announcement that California would be moving into a new phase of the pandemic worries advocates and community health organizers like Rhoads.

The new state action plan acknowledges continuing disparities when it comes to COVID-19 deaths and highlights money in Newsom’s budget that includes $819 million to expand Medi-Cal to undocumented individuals next year, $1.7 billion to invest in a more diverse health care workforce over five years and $65 million to fund the creation of an office of community partnerships and strategic communication.

But the plan offers little in terms of immediate action to fix disparities, and includes no specific programs to help Black communities.

The state health department on Thursday announced new $27 million contracts would be awarded to more than 100 community-based health organizations to shore up vaccination efforts in underserved communities, including African American ones.

However, community advocates worry that rhetoric used by Newsom like “turning the page” on the pandemic will ultimately prevent groups that have never caught up from moving forward.

“We still have growing death rates and case rates. How can we move forward in the pandemic when we’re still suffering?” said Karla Thomas, policy director for the UCLA Native Hawaiian and Pacific Islander COVID-19 Data Policy Lab.

Throughout the pandemic, Pacific Islanders have been hit the hardest by COVID-19. Their mortality rate is nearly twice that of the statewide rate and nearly six times higher than the lowest rate of 2.5 deaths per 100,000 people among those who identify as multi-racial.

While data suggests that Pacific Islanders are nearly 100% vaccinated, Thomas said there is reason to believe that the state’s numbers are inaccurate. At times that number has creeped above 100%. From a personal experience, Thomas said she is one of only two people in her 50-person Samoan church in San Bernardino that she knows is vaccinated. It’s not uncommon for there to be more than two funerals a month in her community.

“I’m really concerned that we’re not taking an equitable approach to mitigate the pandemic among (Native Hawaiian and Pacific Islander) communities and other communities of color,” Thomas said. She criticized the lifting of the state’s mask mandate on Feb. 15 and the governor’s endemic plan.

The pandemic “is not over. It’s not for people who aren’t vaccinated, who don’t have regular health care,” she said.

Last week Rhoads and more than 35 organizations sent a letter to the state health department in part criticizing the state’s inconsistent and confusing messaging on masking. The health department’s initial criteria for lifting the indoor mask mandate included vaccination and infection rates that were unmet when the mandate expired.

Rhoads said instances like this erode public trust in government and scientific organizations, particularly among groups that placed little faith in the institutions to begin with.

In response, the department agreed to schedule a meeting between Rhoads and State Public Health Officer Dr. Tomas Aragon.

In a separate response to CalMatters, the state health department said vaccine equity was the “north star” of its efforts to reach marginalized communities, and that it would continue to partner with community organizations, ethnic media, translators and faith-based groups.

“This work is ongoing, and closing the equity gap across all California communities remains a priority to the state’s vaccination efforts,” the department said in a statement.

‘Nothing to be afraid of’

In Oakland at the Umoja clinic last week, George Dowell, a 40-year-old African American, said he was getting his second vaccination dose because he didn’t “want to be left behind” as more and more businesses require proof of vaccination for entry.

Dowell is among the age group experiencing higher death rates in Riley’s study. He spent the past year watching vaccinated friends and family carefully for side effects before deciding to get the shot himself.

Social media and misinformation played a role in Dowell’s hesitation. “I was listening to certain people, social media, instead of listening to myself and doing what’s right,” Dowell said.

Three weeks ago, he decided it was time. He found the Umoja clinic while driving around the neighborhood and got his first Pfizer shot. Dowell wanted to show his school-aged nieces and nephews that “there was nothing to be afraid of” as they became eligible for the vaccine.

Dowell’s 27-year-old son is also unvaccinated, and Dowell said he promised he would call to let him know how he feels after this second shot.