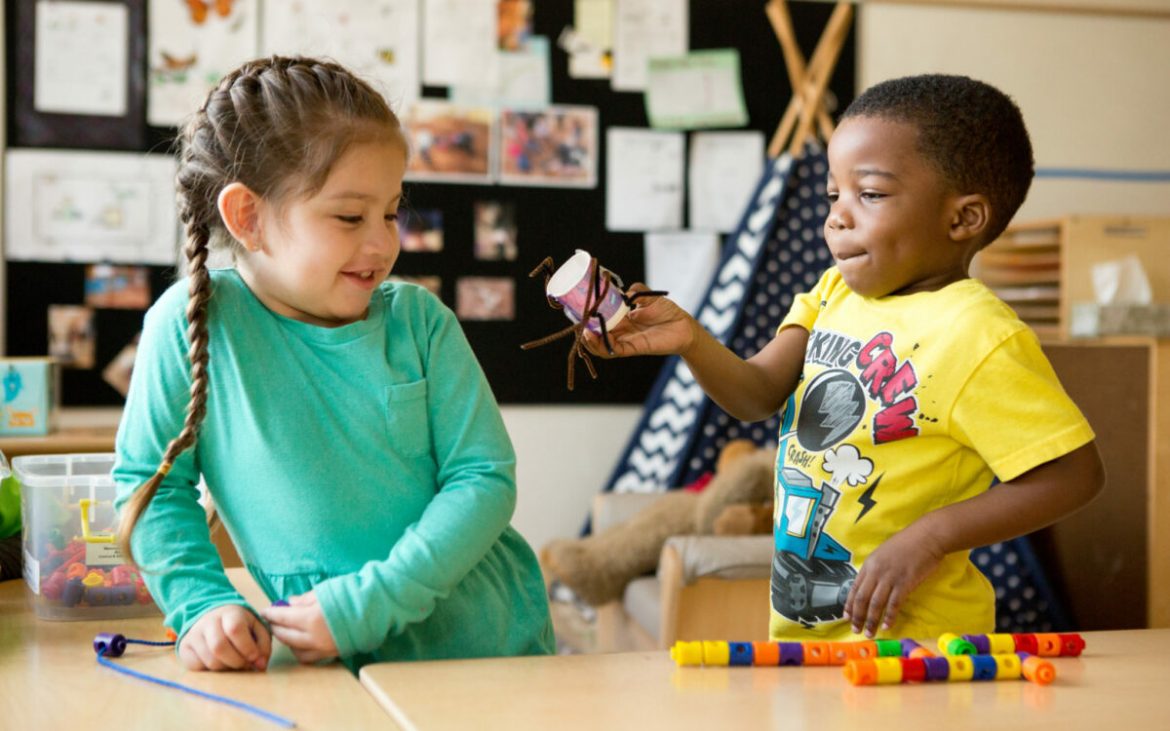 A preschool student shows his classmate a spider he made from pipe cleaners and a paper cup.

California’s subsidized preschool program may be open to children as young as 2 if the expansion of services in Gov. Gavin Newsom’s proposed budget comes to pass.

The California State Preschool Program currently serves the state’s low-income 3- and 4-year-olds. The new proposal to expand the program to children as young as 2 is part of the K-12 “trailer bill,” clarifying policies related to the state budget for 2022-23. Typically, the governor revises the proposed budget in May and the Legislature is required to approve it by June.

Currently, California, which has almost 3 million children under the age of 5, trails behind other states in terms of access to early education, with only 37% enrolled in transitional kindergarten and the state’s subsidized preschool program, according to the National Institute for Early Education Research, a research organization at Rutgers. That’s why childhood advocates see this proposal as a big step forward.

“It is exciting to think that we might expand access to quality child care for more of our toddlers in a systematic way,” said Gina Fromer, CEO of Children’s Council of San Francisco, a resource and referral agency.

“Growing our supply of toddler care options supports our state’s working families — particularly in our communities of color — to overcome struggles like pandemic unemployment, health crises and so much more.”

Preschool and child care are major expenses for most families. In 2020, the average annual price of child care was around $10,174 nationally, a 5% increase from 2019, according to a report from Child Care Aware of America.

Cost is a key reason this expansion of the state’s preschool would be a game-changer for working families struggling to make it in a high-cost state. About 6 of 10 California children under 12 live in a family where all parents are working, according to the California Budget and Policy Center. While the need is high, 60 percent live in a child care desert with limited access to caregivers.

“California’s infants and toddlers have long been last on the list of children served by our public systems,” said Fromer, “despite what science tells us to do in support of child development during the critical first years of life.”

Coupled with the expansion of transitional kindergarten, or TK, to all 4-year-olds, this increased preschool accessibility represents real progress towards reaching underserved children, experts say. Currently, the preschool program serves 3- and 4-year-olds while TK serves primarily those who turn 5 between Sept. 2 and Dec. 2.

“It is a very big deal,” said Scott Moore, head of Kidango, a nonprofit organization that runs many Bay Area child care centers. Also, if this latest proposal is approved by the Legislature, advocates say, the 2-year-olds coming into state preschool could fill the seats vacated by the 4-year-olds headed to TK, helping maintain balance in the system.

“It allows children who need the most to get the most, and it allows for a major expansion for high-quality infant-toddler child care, which is both what parents struggle the most to find …and what is most effective in terms of long-term child and family outcomes,” Moore said. “So while all 4-year-olds win, so do our youngest low-income children and their families.”

The main ambition of state-funded preschool is to fuel the learning and development of young children to improve their academic performance. Preschool can accomplish this goal, research suggests, but only through stable and high-quality programs.

If the quality is inconsistent, experts say, educational achievement suffers. For instance, the quality of Tennessee’s program has often fluctuated, experts say, which may have led to its widely reported negative impact on children.

“Studies of universal programs sometimes find negative effects that persist for many years, when quality is low,” said W. Steven Barnett, senior co-​director of the National Institute for Early Education Research. “The most obvious way in which a universal program can have negative effects is when parents of children who would have received high-quality experiences at home or in nonparental care switch their children to a free universal program that is of lower quality because it is poorly funded.”

If quality is ensured, however, early childhood advocates see increased early education as critical to closing the achievement gap, the gulf in academic performance between low-income students and their higher-income peers.

“I’m thrilled to see some concrete steps toward improving preschool inclusion,” said Shantel Meek, founding director of the Children’s Equity Project, an advocacy/research organization based at Arizona State University. “It would fill a big need and invest in one of the most underinvested parts of the already chronically underfunded early care and education system. It’s the most expensive and least accessible part of the system, and parents have a very hard time finding high-quality care.”

One key to success is making sure that toddlers will receive high-quality education and care that’s tailored to their age group.

“Developmental appropriateness must be front and center,” said Meek, who was a senior policy adviser for early childhood development in the Obama administration. “This can’t be about pushing kindergarten down to toddlers. It has to be about play and exploration, family partnership, rich interactions, home language and social development, smaller ratios and group sizes than for 3-, 4-, and 5-year-olds.”

One size does not fit all when it comes to early childhood programs, experts say. You can’t just provide the same curriculum or staffing for a 2-year-old that you would for a 4-year-old. For example, many toddlers need help using the bathroom.

“It will be essential in the coming months to evaluate the proposal in the context of the California State Preschool Program for providers,” said Patricia Lozano, executive director of Early Edge, an early education advocacy organization, “which will, in turn, make it possible for them to serve more families who have children under 5 in California.”

The state’s proposed expansion of its subsidized preschool system comes even as President Joe Biden’s ambitious plan for universal preschool and affordable child care, a key piece of his domestic policy agenda, has stalled in Congress, under fire from conservatives.

Universal preschool has long been a progressive goal. Then-President Barack Obama notably championed it back in 2013 but was unable to muster Republican support. The Biden plan is designed to make free preschool available to all 3- and 4-year-olds, particularly low-income children. The proposal would establish a federal-state partnership offering funds to expand public preschool programs to an estimated 6 million children.