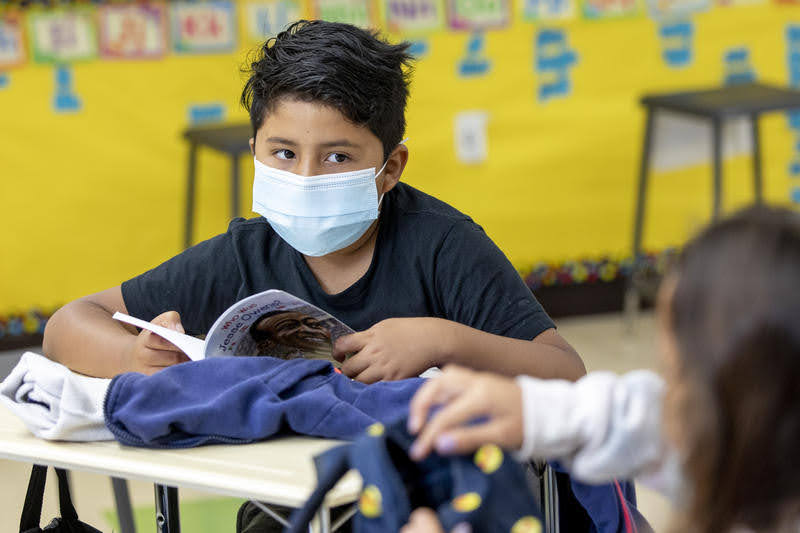 Students throughout California, such as this Marin City second grader, are required to wear masks indoors while at school. (JESSICA CHRISTIAN/SAN FRANCISCO CHRONICLE)

California appears to be on the brink of what could be one of its most dramatic shifts in COVID policy since the pandemic began nearly two years ago: changing school masking rules.

State health officials announced Monday that they are working with “education, public health and community leaders to update masking requirements at schools to adapt to changing conditions and ensure the safety of kids, teachers and staff.”

The move — which came the same day three Democratic-led states unveiled plans to end statewide school mask mandates as soon as the end of this month — follows a 65% decline in California’s test positivity rate from the peak of the omicron surge that derailed much of the state’s workforce and forced many schools to temporarily close.

It also follows Gov. Gavin Newsom’s repeated hints at a forthcoming “endemic strategy” for dealing with COVID, of which the state seemed to reveal several points Monday:

And that’s not all: “Additional adjustments to the state’s policies” will be announced “in the coming week,” state health officials said.

The about-face is the latest indication that California is facing a critical juncture in its COVID response: As Newsom and state lawmakers head into an election year with Californians divided on the state’s pandemic strategy, big, controversial decisions loom — including whether to create stricter vaccine mandates for children and require proof of COVID inoculation to enter almost all public places.