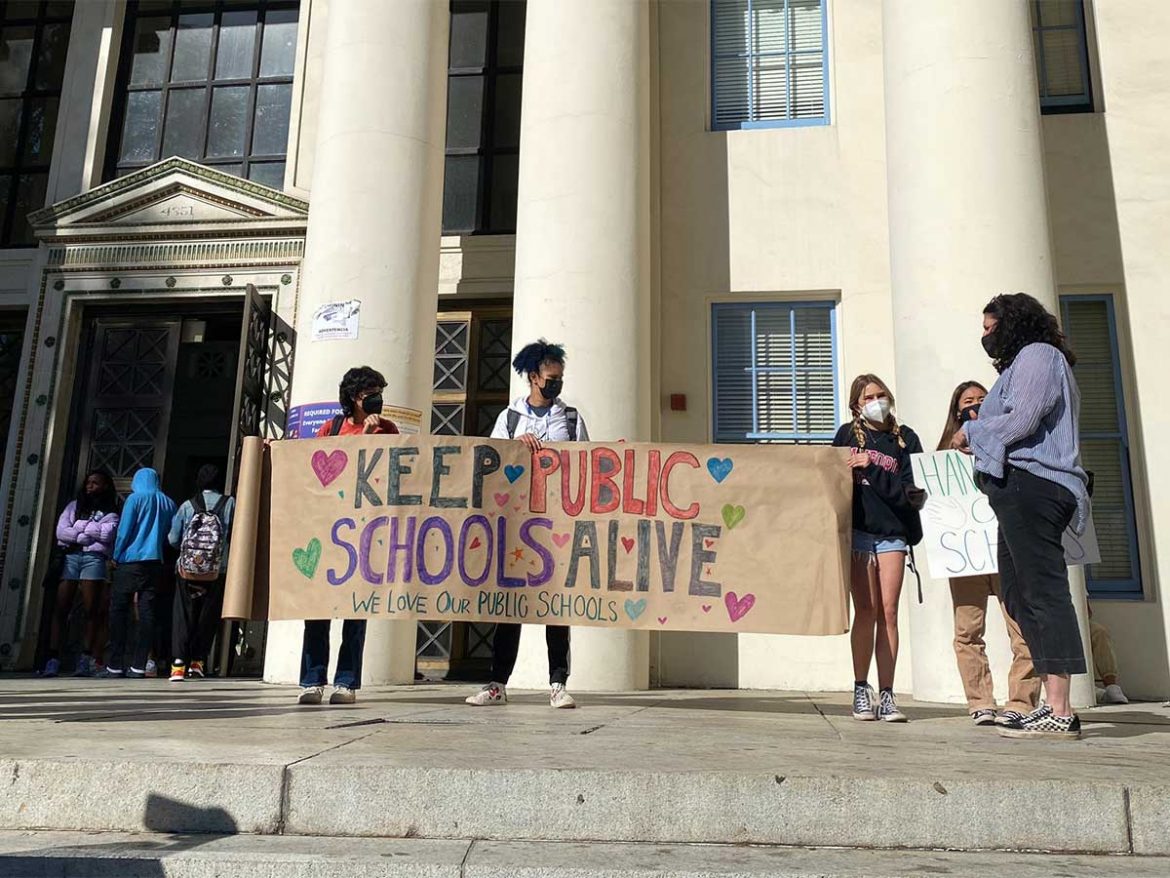 Students at Oakland Technical High School take part in a protest on Friday, Feb. 11, in response to a vote of the Oakland Unified School District Board of Education to close or merge 11 campuses. Assemblymember Mia Bonta has introduced legislation that would provide $10 million in state funding to the school district to help it avoid the closures. (Photo courtesy of @rayloviejones/Twitter)

School closures in Oakland could be avoided under a new bill being considered in the state Assembly.

Assemblymember Mia Bonta, D-Oakland, introduced Assembly Bill 1912, which while it doesn’t stop the closure and consolidation plan Oakland school board members voted on this past Wednesday, could pave the way for avoiding it.

The bill also gives more time for the school district to show that it is solvent financially.

Bonta said her bill gives OUSD “a little grace” so they don’t have to make “potentially irreversible” decisions affecting mainly Black and Hispanic students during the pandemic.

Under Bonta’s bill, the school district would have another year to decide whether to consolidate schools.

Oakland teachers argue that the schools now slated for closure this year and next serve mainly Black students and that the school district has a pattern of aiming to close schools in Black and Hispanic communities.

The school district’s plan is meant to address an expected budget deficit.

“This kind of change is extremely difficult and upsetting to students, staff, and families,” OUSD Superintendent Kyla Johnson-Trammel said in a statement. “A stable school can be a second home for many students and the closure of any school is a major disruption.”

Bonta’s bill sends OUSD about $10 million that was in the prior year’s state budget, without an obligation to close or consolidate its schools, as is now required.

A spokesman for the school district was not immediately available to say how the district might use the money.

Thousands listened to public comment and the school board’s contentious vote at its Feb. 8 meeting that ran into the wee hours of the following morning.

Hundreds more people were not allowed to comment before the vote.

“None of these school closures is justified,” school board member Mike Hutchinson said this past Wednesday at a news conference about the school board’s decision. Hutchinson voted against the action by the board.