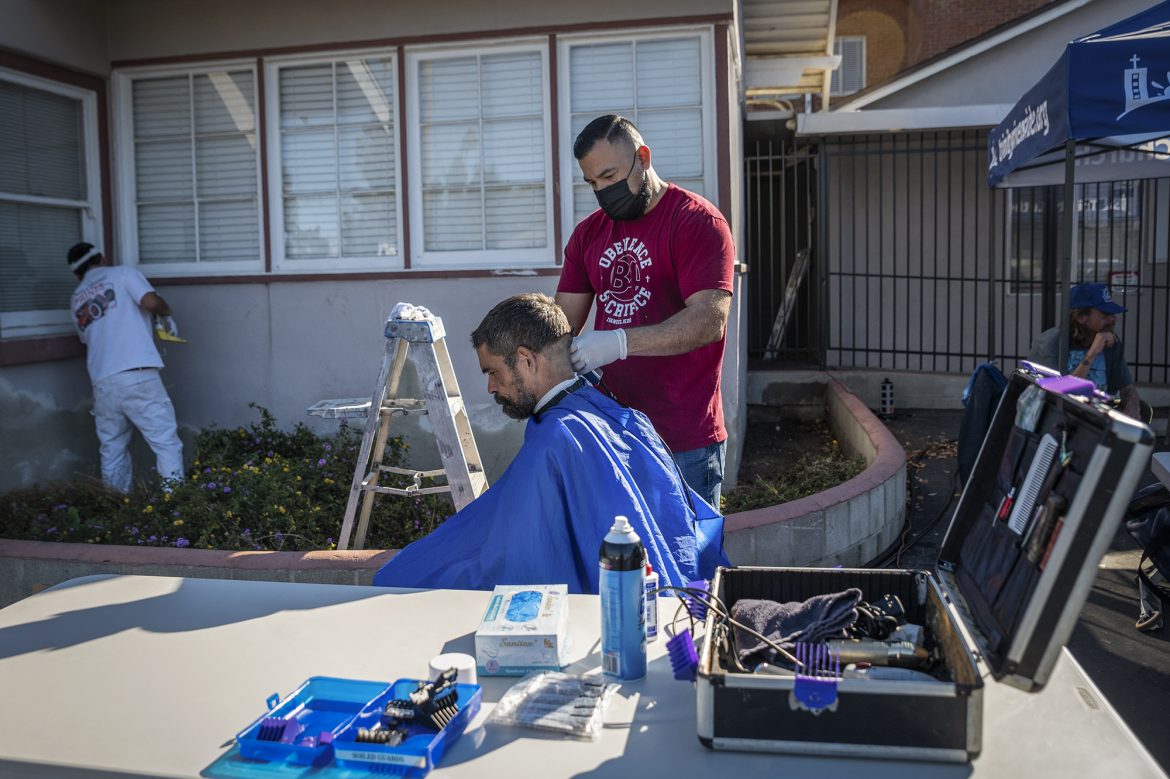 A volunteer barber cuts an unhoused person's hair at Trinity Church in Riverside. Those who are unhoused come once a week to the church where they are offered haircuts, clothes, food and a shower. Raquel Natalicchio for CalMatters

In the middle of March last year, Los Angeles officials were gearing up to clear a 200-person homeless encampment at Echo Park Lake.

For Denise Velazquez, 53, then an outreach worker with the Los Angeles Homeless Services Authority, her task was clear: Get 10 people indoors.

She helped her clients – who were cold, tired and desperate to shower – pack their bags and sign intake forms. She gave them hope that warmth was around the corner: Hotel rooms under Project Roomkey, the state’s program to shelter unhoused people most at risk of catching COVID-19.

But orders changed overnight. Her agency had access to only three beds, and when she told her clients, they yelled, spit, and lunged at her partner. Velazquez says she broke their trust – and that broke her heart.

“My stomach is feeling so uncomfortable and heart broken,” Velazquez wrote in an email to her supervisor on March 18, 2021.

In the weeks that followed, Velazquez said her health deteriorated. Her blood pressure spiked, her diabetes worsened, and her anxiety and depression spiraled. Her employer granted her a medical leave of absence, but therapy revealed that the only way to heal, she said, was to quit. Abandoning her clients broke her heart all over again.

Turnover has long plagued the homeless services field. COVID-19 has only made the problem worse as the omicron surge causes worker shortages across California’s economy. And without enough service workers, the state’s ambitious, multibillion-dollar strategy for reducing homelessness is unlikely to work.

Most people who enter social work know to expect small paychecks; they’re driven by compassion and a desire for positive change. But caring too much can be crushing when housing is elusive, mental health services scant, and communication splintered among the myriad entities who decide the fate of the unhoused.

“We’re paying these folks pennies on the dollar to burn themselves out completely,” said Tami McVay, assistant program director at Self-Help Enterprises, which serves disadvantaged communities in the San Joaquin Valley.

When you bring up staff turnover or vacancies with any provider or advocate, they nod vigorously. The mostly government-contracted private organizations serving people experiencing homelessness have waged an uphill battle to recruit and retain workers into their fast-growing workforce, including some formerly homeless individuals.

L.A.-based People Assisting The Homeless, or PATH, which serves about a fifth of the state’s homeless population, has hired seven recruiters to help fill 340 vacancies, out of 1,100 jobs, said CEO Jennifer Hark Dietz. It’s now taking an average of four months to fill any given spot.

And that’s before the latest homelessness budget, approved last summer by Gov. Gavin Newsom and the  Legislature, floods providers with $12 billion over the next two years. The state says the funding will require thousands of new positions in the homeless response system.

“We have all this money,” said Farrah McDaid Ting, a senior legislative representative with the California State Association of Counties. “Can we really do this if we don’t have the people? I think there could be a real limitation.”

At the root of the worker shortage – which advocates say is really a shortage of good jobs – is low wages. Most homeless services organizations CalMatters spoke with pay starting frontline workers between $16 and $18 an hour, barely higher than minimum wage. They openly admit it’s far too little for the grueling labor, and often isn’t enough to live in expensive California cities.

“In the homeless services sector, it’s like: You didn’t get this paperwork in on time, I lost my housing, or my legs are hurting, I think I might have a blood clot,” said Mel Tillekeratne, executive director of Shower of Hope, which runs 22 mobile shower sites across Los Angeles County. “It’s an unbelievably high amount of stress. I’ve seen so many outreach workers completely checked out.”

According to the U.S. Bureau of Labor Statistics, people employed in emergency and other relief services – including homeless service providers – made an average annual salary of $49,616 in 2020.

Why not pay more? Tillekeratne says government contracts usually cap personnel costs. He had to raise money privately, for example, to offer hazard pay at the start of the pandemic. Federal and state grants usually come in bursts and have short timelines, forcing organizations to fill temporary positions before they expire.

If they don’t leave homeless services completely, workers will switch jobs for $1 or $2 more an hour. Or, if they get promoted, they often lose direct contact with clients, adding to a sense that frontline work is undervalued, said Earl Edwards, a graduate student at the University of California, Los Angeles who interviewed 11 case managers.

“A lot of individuals didn’t see a pathway for them to stay doing this work,” Edwards said.

Most organizations that serve homeless individuals often hire people who are just exiting homelessness themselves: “That also adds an additional level of trauma,” he said.

Shelter workers in Fresno constantly reach out about “unstable living arrangements of their own, asking for housing,” said Katie Wilbur, executive director of RH Community Builders.

The fewer employees with master’s degrees in social work often earn higher salaries, but even those aren’t high enough to keep them from more lucrative jobs, explains Donna Gallup, an assistant professor at Azusa Pacific’s Department of Social Work, who runs a pilot program to recruit more students into the homeless services field.

“If you have an opportunity as a graduate student, with student debt, you may select a school, a hospital or another nonprofit where you are not having to work with a stigmatized population that is very demanding and the work conditions, especially with COVID,” Gallup said. “It has been a challenge.”

Newsom’s proposed 2022 budget, which still has to be negotiated with the Legislature, includes $1.7 billion over three years to expand the state’s health and human services workforce “with improved diversity, wages, and health equity outcomes,” said Rodger Butler, a spokesman for the California Health and Human Services Agency. But even that may not be enough.

“Until… funding is commensurate to offer living wages across positions in the sector, it’ll be hard to train our way out of this crisis,” said Mari Castaldi, senior legislative advocate on homelessness at Housing California.

To increase the wages of the lowest-paid workers, the nonprofit is calling for a supplemental appropriation – on top of $2 billion over two years in flexible spending in last year’s budget that cities and counties will use to pay nonprofit partners to run most of these homeless programs.

“We don’t think it makes sense to say to service providers, ‘You get to choose between serving the number of clients that you set forth to serve, or increasing wages,’” Castaldi said.

But pay is only one part of the problem, says Deborah Son, executive director of the National Association of Social Workers’ California chapter. She represents 9,000 of the state’s roughly 75,000 certified social workers – and says all of them are impacted by the severe shortage of affordable housing in California.

“We can bulk up the workforce and get people jobs and create jobs,” she said, “but if we don’t create the housing structures that are necessary, and we’re talking about the intricate systems necessary, your efforts become moot.”

Following her stint at LAHSA, Velazquez found a new job at Union Station Homeless Services as a care coordinator, earning $24 an hour. Half of her 20 clients are in housing, and her job is to keep them there. Her other clients are trying – unsuccessfully since September – to get into a place using housing vouchers, which cover two-thirds of the rent.

“There’s not enough apartments, and landlords don’t want them,” she said. “Legally (landlords) can’t say, ‘No, I’m not going to take a voucher.’ But they can say, ‘Oh, but your client has to have 650 credit score, and no evictions, and no criminal record.’”

“This is where the burnout comes,” she added. “It’s like, a case manager can do and do and do and we still feel we’re not doing it.”

In her new job, Velazquez said she feels heard when she brings up concerns. She gets a day off every two weeks to unwind, checks in with her supervisor regularly and participates in training and meditation.

Her own self-care is essential, too, she explains, holding up an angel aura quartz around her neck, which she uses to steel herself for difficult encounters. “This is like my sanctuary, away from everything,” she said, gesturing around her two-bedroom in Monterey Park. “When I sit in that chair, I feel like I’m getting a hug from my grandpa.”

Clients feel the brunt of turnover just as acutely.

A recent study found that in the last decade more than a fifth of the 16,026 people in Los Angeles placed in permanent supportive housing – which pairs rental assistance with case management, substance use programs and mental health treatment – plunged back into homelessness. Black tenants were the most likely to return to the streets or a shelter, and they cited high case manager turnover as one of several factors.

“When you have a case manager who is trying to help you create long-term goals, but they’re only staying for three to six months, it prevents you from actually being able to follow through,” said Edwards, a co-author of the study.

Some tenants he spoke with were already on their sixth or seventh case manager while in permanent housing. In turn, some clients didn’t bother to learn their case manager’s names for a couple of months, making their jobs that much harder.

“Once you have one you can actually work with, next thing you know, you get a notice on your door, ‘Oh, well, hi, this will be my last week.’ And you’re like, ‘Damn. You just got here,’” said Theresa Winkler, who lives with her husband in permanent supportive housing on downtown L.A.’s Skid Row.

Winkler, 58, said she has been living in permanent supportive housing for about a decade and was homeless for about half her life before that. She said she has been clean from crack, heroin and alcohol for 15 years, and continues to seek help for post-traumatic stress disorder, anxiety, and depression. But cycling through caseworker after caseworker – at least three in the last two years – is “straight frustrating.”

“With addiction, a relapse happens weeks before you pick up,” she explained. “If you know yourself and you see it coming, you’re able to go downstairs, talk to your caseworker, and tell her, ‘Hey, look, can I talk to you for a few minutes?’ But if you don’t have anybody you can trust to go in and talk to –  because that’s the biggest word right there, trust – then hey, I’m back out there doing what I was doing in the beginning.”

Her husband, her doctors, and her 12-step recovery program have helped her stay on track and find solace. So has reflecting on her progress.

“It’s nice for me to finally say, ‘You know what? I finally found peace,’ she said. “Because it’s hard to find peace. Look at where I’m at. I’m in the pits of hell.”