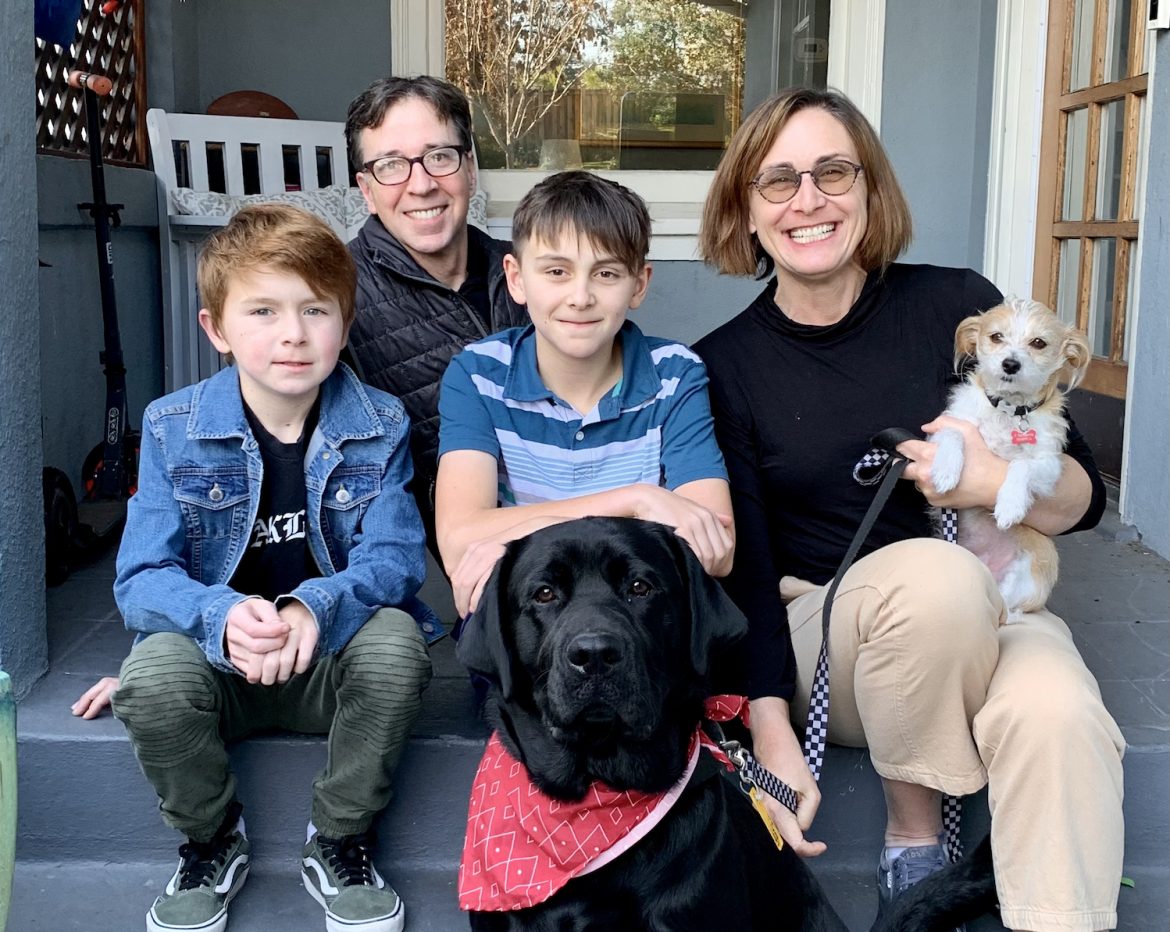 Joe and Rebecca Leonard, with Stuart, and sons Fred and Gus, with Lewis in front

Breed: Stuart is a chihuahua/terrier mix with a touch of miniature poodle, and Lewis is a lab.

Adoption story: With Stuart, it happened four years as we were walking to an appointment on College Avenue and the owner of a small rescue organization had a crate full of kittens that caught our eye. She was walking back to her car from Claremont Vet after their shots. We asked if she had any dogs in the car to adopt, something we had barely considered, but there he was in a blue crate and perfectly named Stuart!

All of the animals she had in the car were displaced from shelters in Santa Rosa after the fires when they needed to make room for new animals.

We got Lewis last February when he was 12 weeks old from Bel Amour Labs. This was right around the time that in-person school was starting and the kids were very excited to be back. The first time we met him was the day of adoption. When our younger son met our new puppy, he said, “Meeting him feels like the feeling of going back to real school so we should name him after [my 4th grade teacher] Mr. Lewis.” So he’s named after Mr. Lewis at Wildwood whom both our boys had.

Likes: Stuart, more of introvert, loves his bed under our bed and taking all of Lewis’s bones and hiding them in the corners of his bed. Stuart shows immense joy in the morning in anticipating his morning walk. His toenails hitting the hardwood floor always make us smile.

Lewis loves his frozen peanut butter kongs and socializing at the dog park.

Dislikes: Lewis doesn’t like when we are right outside the house and he can see us but isn’t with us. Stuart doesn’t like Lewis interrupting his tranquility.

Interesting facts: We have a cat named Brutas that we got during the pandemic, and both Stuart and Lewis really like to play and cuddle with him.

Anything else? According to Claremont Vet records, Stuart was formerly known as Pumkin. The first time we met Lewis he was making what we call “seal noises” and he makes them now when he is really excited to see us.