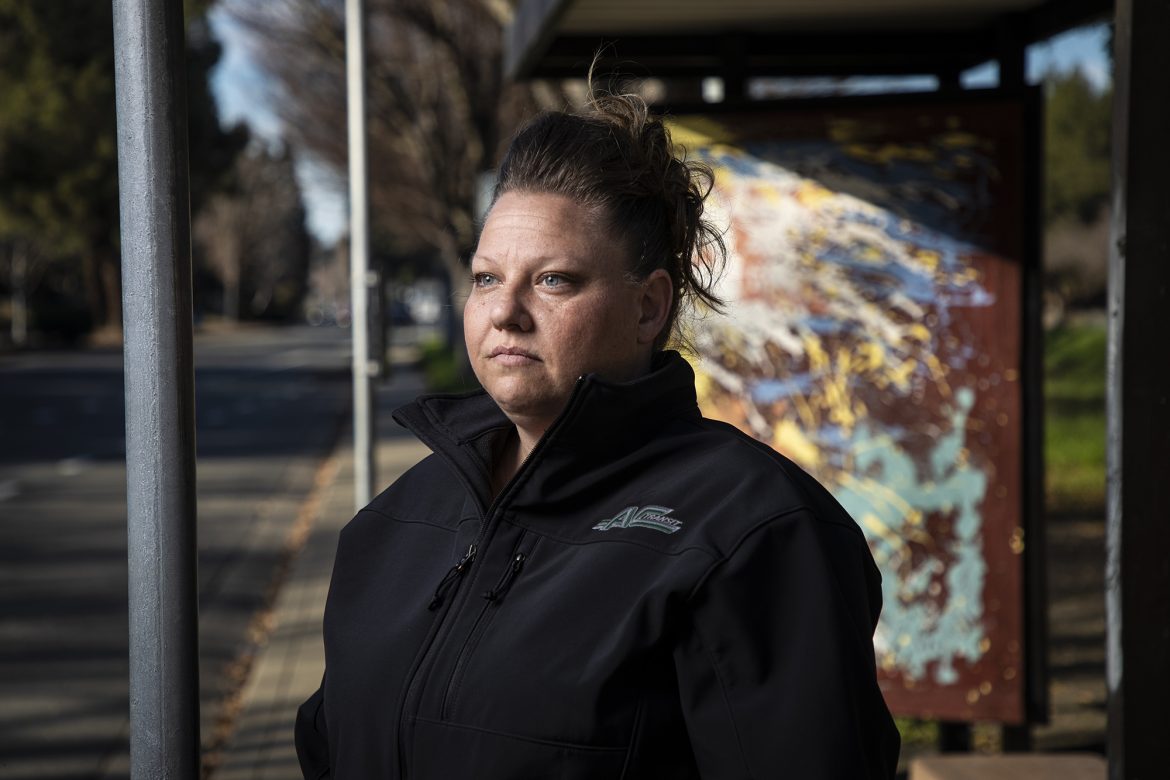 AC Transit driver Brandi Donaldson is photographed at a bus station near her home in Rodeo on Jan. 24, 2022. Photo by Martin do Nascimento/CalMatters

Bus driver Brandi Donaldson describes the early days of the pandemic as living under a dark cloud.

Week after week, the 38-year-old AC Transit employee wondered when – not if – she would get infected with COVID-19 and bring it home to her husband, four kids and elderly parents. “It wasn’t until April of 2021 that the black cloud was finally removed,” she said, “and that was when I was able to get my second COVID vaccine shot.”

But now with the omicron surge, that dark cloud is back.

Transit agencies around the state are experiencing a worker shortage – and it’s disrupting service in Sacramento, the Bay Area and in Southern California because too many workers are out sick, quarantining or scared to come into work.

Every day, Donaldson says, at least one or two of her coworkers tests positive. And that means fewer drivers on the road – and more frustration among passengers.

Some counties are also in the process of issuing vaccine mandates for employees – which includes transit workers. That could lead to some dismissals for those who don’t comply, further reducing the workforce and service to riders.

“Before the pandemic, there weren’t enough bus drivers to drive the routes that we have unless the majority of us work a whole lot of overtime,” said Sultana Adams, 47, who also works for AC Transit. “We were already short. Imagine what it’s like now.”

The labor shortage is part of a nationwide trend and isn’t limited to transit workers. But because transit systems are arteries that get employees to work – especially lower-income workers – the impact is reverberating throughout the California economy.

Giovanni Circella, director of the future mobility program at the UC Davis Institute of Transportation Studies, said that while remote work has enabled California’s economy to bounce back, many jobs – usually lower-wage – still require people to show up to work. Bus riders in particular, he said, “don’t have a lot of other options.”

The California Transit Association, which represents more than 200 agencies, says the labor shortage is causing service reductions across the state and warns that the impact could harden economic disparities because of the demographics of riders.

“The people who are hit hardest are low-income – specifically, low-income people of color – who often work in essential roles and who often lack other travel options,” Michael Pimentel, the association’s executive director, said in an email.

“For these Californians, transit’s labor shortages present new challenges to fulfilling basic needs, like getting to work and school, making doctor’s appointments, and picking up groceries.”

Ridership was already declining before the pandemic: From 2012 to 2016, the number of transit rides statewide dropped by 62 million a year. Still, while only about 5% of workers statewide took public transportation before the pandemic, in larger metropolitan areas such as San Francisco-Oakland-Berkeley, nearly 19% of workers, or 462,000, used bus and rail, Census data shows.

Transit operations throughout California never came to a complete stop during the pandemic: While systems suspended some routes and limited the number of passengers, they provided an essential service that shepherded employees to hospitals and grocery stores and helped others get around who couldn’t afford a car, or to summon a rideshare service. Some offered free rides.

But keeping that lifeline going wasn’t easy on transit workers.

Stephanie St. Onge, a driver with the Valley Transportation Authority in Santa Clara County, said that operators who are coming in feel overworked from trying to keep up the service. After a VTA employee killed nine co-workers at the San Jose railyard last May, the light rail system shut down for two weeks – which meant more demand for bus service.

“When you’re overworked, what happens?” St. Onge asked. “Your immune system goes down. It starts to wear and tear.”

Exhaustion isn’t the only problem.

“I was spit on in April 2020, then four more times because of the passenger limits and not being able to pick people up,” recalls Donaldson of AC Transit, the state’s third largest bus system with about 175,000 passengers a day before the pandemic. “I had my bus door bashed in on two different occasions. A guy tried to hit me with an umbrella. They put plexiglass up to put a barrier between us and passengers, and I had somebody punch it in – all because of having to enforce mask policy and the passenger limit.”

While mask rules are different from one city to the next, and changed within cities during the pandemic, buses and other public transit have been under federal rules that require face coverings since January 2021. Not all passengers know that, or want to follow the regulations, which have been extended until at least March 18.

Drivers around the state said some agencies were slow to provide protective gear – or that it wasn’t enough. And while mass transit workers were deemed essential in an executive order by Gov. Gavin Newsom, not all counties prioritized drivers to get vaccines at the same time as grocery store workers, for example, in the vaccine rollout last year.

The impact hasn’t been limited to drivers. Mechanics say there is not enough staff to sanitize buses at the end of their routes – and as the CDC has eased guidelines, it’s become less of a priority.

Officials from the Sacramento Regional Transit District said the omicron surge has caused more workers to be out sick than at any time during the pandemic. Some employees have also had to deal with school closures, childcare and other challenges plaguing the workforce nationally.

Typically, there are employees who can sub for drivers who are out, but the recent surge has meant more trip cancellations and delays, said Jessica Gonzalez, public information officer for the agency, which operates buses and the light rail system in Sacramento. It restored full service in September 2020, and was also one of a few agencies that expanded, adding an Uber-like service.

The agency has launched a major effort to recruit new workers. To keep the existing workforce, it gave a $750 bonus, funded through an award from the American Public Transportation Association. Still, officials acknowledged the extra tasks for drivers, such as enforcing mask mandates, though sometimes supervisors or police officers are asked to step in.

“We can’t deny that, and it’s been hard, especially for our frontline workers,” said Shelly Valenton, vice president of integrated services and strategic initiatives at SacRT. “We’re trying our best, you know, within the resources that we have available.”

Regional Transit did offer paid sick time for workers to get vaccinated and for any side effects before the state mandated supplemental paid sick leave. Officials said they’re waiting to see what happens with Gov. Gavin Newsom’s budget proposal to reinstate the leave. But there are no specific plans for hazard pay at SacRT.

At AC Transit, that’s something the workers union has been pushing for and formally demanded last fall.

“We have had over 180 workers infected with COVID and have had several members that passed away,” Robert Coleman, president of the ATU 192 union, said in a Dec. 4 statement. “We’re only asking for the retroactive hazard pay that we deserve for staying the course.”

On Wednesday, the AC Transit board is set to vote on $5 million in “appreciation pay” for employees.