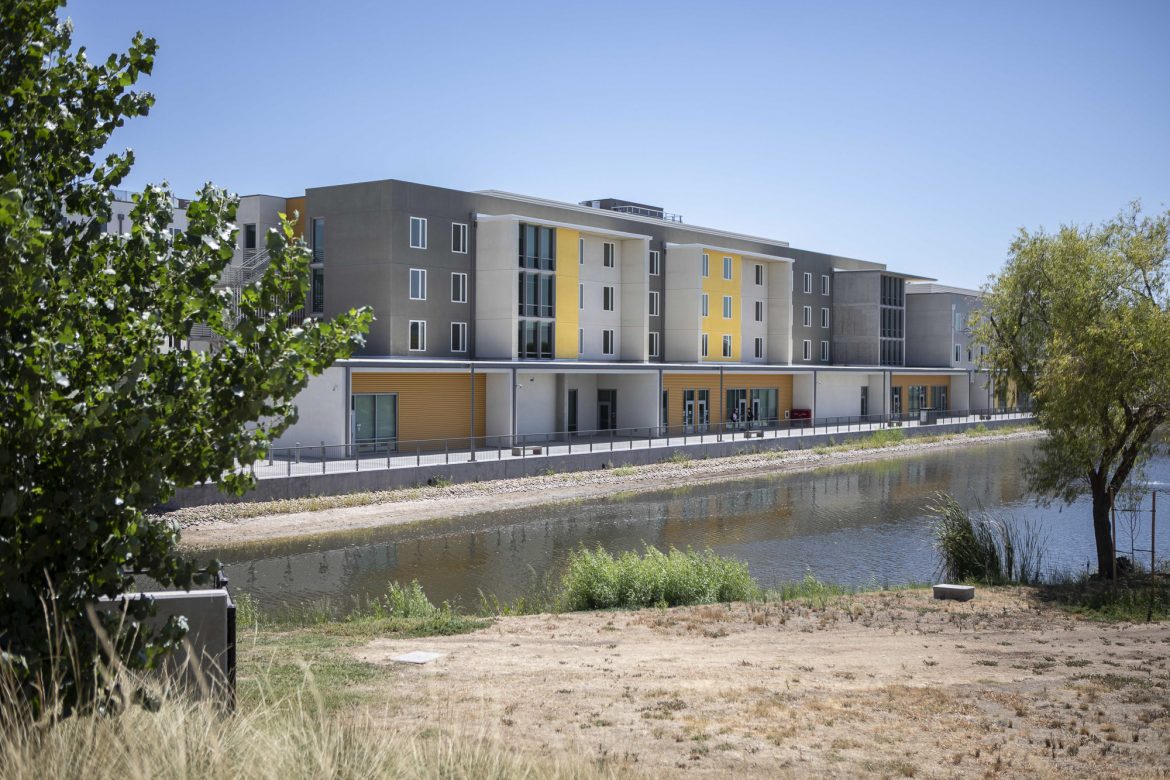 Newly-built facilities at UC Merced on August 2, 2019. Photo by Anne Wernikoff for CalMatters

The University of California housed more students than the system officially had room for last fall. Yet UC leaders, lawmakers and the governor all want to dramatically expand student enrollment.

But that ambition is at odds with a housing crunch crippling the UC and campuses across California.

Students will need somewhere to live and a new legislative plan would throw in $5 billion to help the state’s campuses ramp up their housing stock.

Assembly Bill 1602 by Assemblymember Kevin McCarty, a Democrat from Sacramento, would create a $5 billion fund that would lend money, interest-free, to public colleges and universities seeking to expand their supply of affordable housing.

That much money could house around 21,000 more students, based on recent analyses that show campuses spend an average of roughly $240,000 per student bed when constructing housing. But even that may not meet the total need given how many students struggle with housing insecurity and homelessness.

The plan builds on a $2 billion grant for affordable student housing lawmakers approved last year, and signals the state’s increasing commitment to tackle all the costs students encounter in earning a degree. McCarty sees the loan program as a way to capitalize on another expected massive state budget surplus. Also, unlike financial aid programs that require annual funding, the state can help build housing once and allow a generation of students to reap the benefits, the thinking goes.

Campuses struggle to finance their housing projects so they can cover operating and debt repayment expenses while still being affordable to students, an analyst with the Legislative Analyst’s Office told lawmakers in November.

Removing interest from the equation would allow campuses to pass more of the savings onto students, McCarty told CalMatters.

But the proposal faces a long road through the Legislature and currently doesn’t define what affordable units are, other than they should cost less than local market rates.

Under McCarty’s plan, the University of California, California State University, and to a smaller extent, the California Community Colleges, would tap into these funds swiftly, build more student homes, and then over a period of no more than 30 years use student rental income to repay what they borrowed — a revolving zero-interest loan. Then the state could lend another round of money for student housing as the coffers for this program replenish.

The loan would be managed by the State Treasurer. Campuses would be able to use funds to build new structures, demolish old ones and renovate existing dorms. McCarty wants the bill to pass in the next few months and go into effect immediately. The money would reach campuses mid-2023 at the earliest.

“We have a college affordability crisis and we have a housing supply crisis,” said McCarty. “These two things are really acute right now in California.”

He proposed a similar revolving loan last year but those plans were gutted.

Think of the student housing funding splurge as the third leg in the college-affordability barstool that also includes:

As written, the bill doesn’t define what affordable rent means — just that they should be below local market levels for student housing. Last year’s grant program, however, is more specific: It caps rent at a low level of what county median incomes are. In Los Angeles, for example, campus housing built with the grant money can’t charge more than $700 a month per bed in rent in today’s dollars. Though standard university units are typically cheaper than off-campus housing, they can still go for over $1,600 a month, UCLA and UC Berkeley reported.

Nor does the proposed loan program designate what percentage of the money would go to the higher-education systems. The grant program reserved half of all money for community colleges, 30% for the Cal States and 20% for the UCs. That caught some UC insiders off guard, given that few community colleges have a history of building student housing.

McCarty said most of the loan funds would likely go to the Cal States and UCs, but those details may change. Another difference between the two housing programs: McCarty’s loan bill presently would permit funds to be used for faculty and staff housing.

For sure the state needs more student housing. Gov. Gavin Newsom wants to ad7,000 more UC students from California by 2027 on top of the nearly 11,000 additional slots he and lawmakers approved last year. The UC has its own goal of expanding enrollment by 20,000 students by 2030 — including 4,000 graduate students — though not necessarily all of those added slots would be for in-person learning.

Expanding enrollment and not housing supply “is going to be a big problem,” McCarty said.

It would also likely violate the delicate balancing act some UC campuses have worked out with their local governments. UC Davis and UC Santa Cruz are legally obligated to provide housing space for every new student they enroll. Meanwhile, a judge blocked a UC Berkeley expansion, citing state environmental law.

Even so, students are in the midst of a dire housing crunch. The UC reported that its housing occupancy was at 102% of available space in fall 2021. Numerous campuses had more demand for campus housing than beds available last fall and hundreds of students took to living in hotels.

A third of California’s college students grappled with unstable housing, according to a 2019 survey. Likely tens of thousands of students experience homelessness.

Sometimes the higher education systems can’t even get out of their own way: CalMatters uncovered one instance in late 2021 in which a bureaucratic snafu could wind up costing the Cal State system 3,000 beds.
The UC, Cal States and community colleges have already proposed more than $3 billion in state-supported housing projects — far exceeding the $2 billion housing grant lawmakers approved last year.

The bill’s first legislative hurdle will be to win votes in the Assembly’s higher education committee, likely sometime in March.