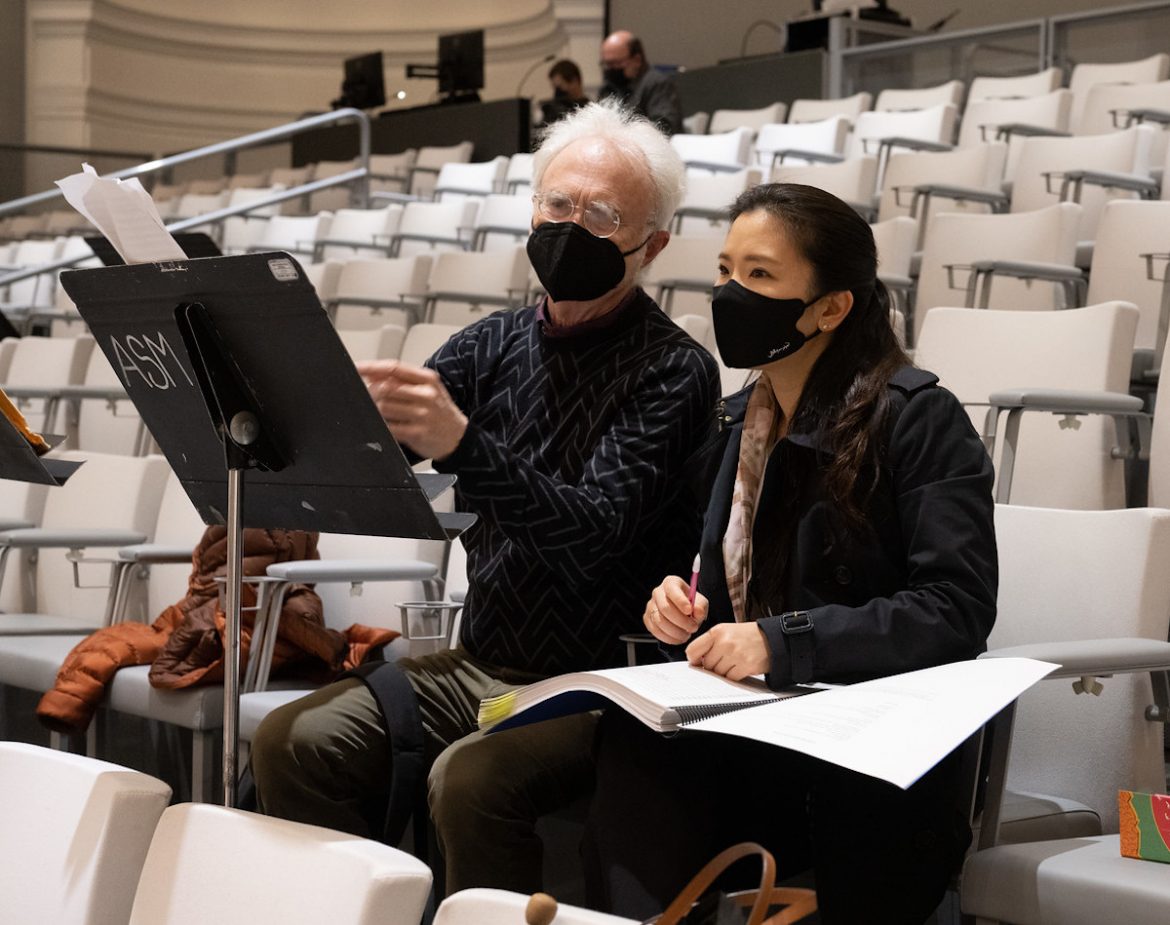 Looking, as did the Roman deity Janus, forward and back, San Francisco Opera has announced its upcoming 100th season, one that is both long on ambition and heavy on nostalgia. In a livestreamed news conference early Wednesday evening, general director Matthew Shilvock and music director Eun Sun Kim unveiled big plans for the company’s 2022-2023 centennial, beginning with an opening night concert and an Opera Ball in the City Hall rotunda on Sept. 9 and encompassing eight subsequent main-stage operas and several additional concerts and celebratory events through June 30, 2023.

Berkeley-based Pulitzer Prize-winning composer John Adams brings the first opera to the War Memorial stage Sept. 10 with the world premiere of  “Antony and Cleopatra,” his take on the Shakespearean classic, with additional inspiration from Virgil, Plutarch and other classical texts. It will be conducted by Kim, finally in her first full season in the pit, be directed by Elkhanah Pulitzer and star soprano Julia Bullock opposite bass-baritone Gerald Finley, highly acclaimed for his title role as J. Robert Oppenheimer in another Adams world premiere here, 2005’s “Doctor Atomic.”

The final opera of the season is another new work by a Bay Area composer. Gabriela Lena Frank’s “El último sueño de Frida y Diego,” with a libretto by Pulitzer Prize-winning playwright Nilo Cruz, reimagines the relationship between famed Mexican artists Frida Kahlo and Diego Rivera as he, a widower for three years, pleads with the underworld on the Day of the Dead to be allowed to see her once again. Co-commissioned with the San Diego Opera, which will premiere it this fall, it opens a five-performance run here on June 13, 2023, and stars two former SF Opera Adler Fellows, mezzo-soprano Daniela Mack and Mexican baritone Alfredo Daza. Remarkably, it will be the first Spanish-language opera in the company’s history.

The other four productions in the fall season are Tchaikovsky’s “Eugene Onegin” (Sept. 25-Oct. 14), starring Russian soprano Evgenia Muraveva as Tatyana and Canadian bass-baritone Gordon Bintner as Onegin, both making their SF Opera debuts; Francis Poulenc’s “Dialogues of the Carmelites” (Oct. 15-30), a mid 20th-century work set in a convent against the backdrop of the French Revolution that was given its American premiere by SF Opera in 1957, returning with soprano Heidi Stober in the role of Blanche de la Force;  “La Traviata” (Nov. 11-Dec. 3), in SF Opera’s first new staging of Verdi’s classic tragedy in 30 years, with South African soprano Pretty Yende, who has triumphed in the role of Violetta across Europe, bringing it to the United States for the first time; and Gluck’s “Orpheus and Eurydice” (Nov. 15-Dec.1), the 1762 opera based on the Greek myth, with Polish countertenor Jakub Józef Orliński portraying the distressed musician who tries to bring his wife back from the dead and soprano Christina Gansch as his beloved.

SF Opera launches its summer season with an entirely new interpretation of a fixture in its repertoire since its second season in 1924, “Madame Butterfly” (June 3-July 1). This time, Puccini’s masterpiece is viewed through the eyes of the young son the distraught heroine Cio-Cio-san is forced to give up. Soprano Karah Son makes her SF Opera debut in the title role; tenor Michael Fabiano sings as Pinkerton, with mezzo-soprano Hyona Kim as Suzuki and baritone Lucas Meachem as Sharpless.

Perhaps Richard Strauss’ most demanding opera, “Die Frau Ohne Schatten” (June 4-28) is the summer season’s second offering. Translated as “The Woman Without a Shadow,” the 1919 German work revolves around an “Empress” of the spirit world who has to steal a mortal woman’s shadow to keep her own husband from turning to stone. San Francisco Opera, which gave it the American premiere in 1959, brings it back with the celebrated Swedish soprano Nina Stemme as the victim of the theft and Finnish soprano Camilla Nylund as the Empress.

In addition to reprising (and reinventing) works associated with its past, the Opera has other plans to celebrate its longevity. (The company is the third oldest in the country, surpassed only by the New York Met at 136 and the Cincinnati Opera, which hit its centennial in 2020.) The most triumphant of them will be a 100th Anniversary Concert on June 16, 2023, with details forthcoming, but described as a “historic evening of music and memories” that will bring long-favored artists back to the stage with the Opera Orchestra and Chorus.

Some ingenious, more whimsical outreaches to audiences will include several “Boheme Out of the Box” presentations on as yet unscheduled dates in early 2023 that will mount shortened versions of Puccini’s “La Boheme” on a shipping container that will travel to audiences around the Bay Area. There will also be, in the midst of the Verdi opera run, “The Traviata Encounter” performance on Nov. 19 that will present only the first act, with its famous “Libiamo” toast, but then invite the audience to stay on for an evening of food, drinks and interacting with the artists in a “transformed” Opera House setting.

The opening weekend of the new season, in addition to the Sept. 9 concert featuring soprano Nadine Sierra, tenors Michael Fabiano and Pene Pati and baritone Lucas Meachem and the “Antony and Cleopatra” premiere the following night, will conclude with the return of the traditional free Opera in the Park concert Sept. 11 in the Robin Williams Meadow at Golden Gate Park.