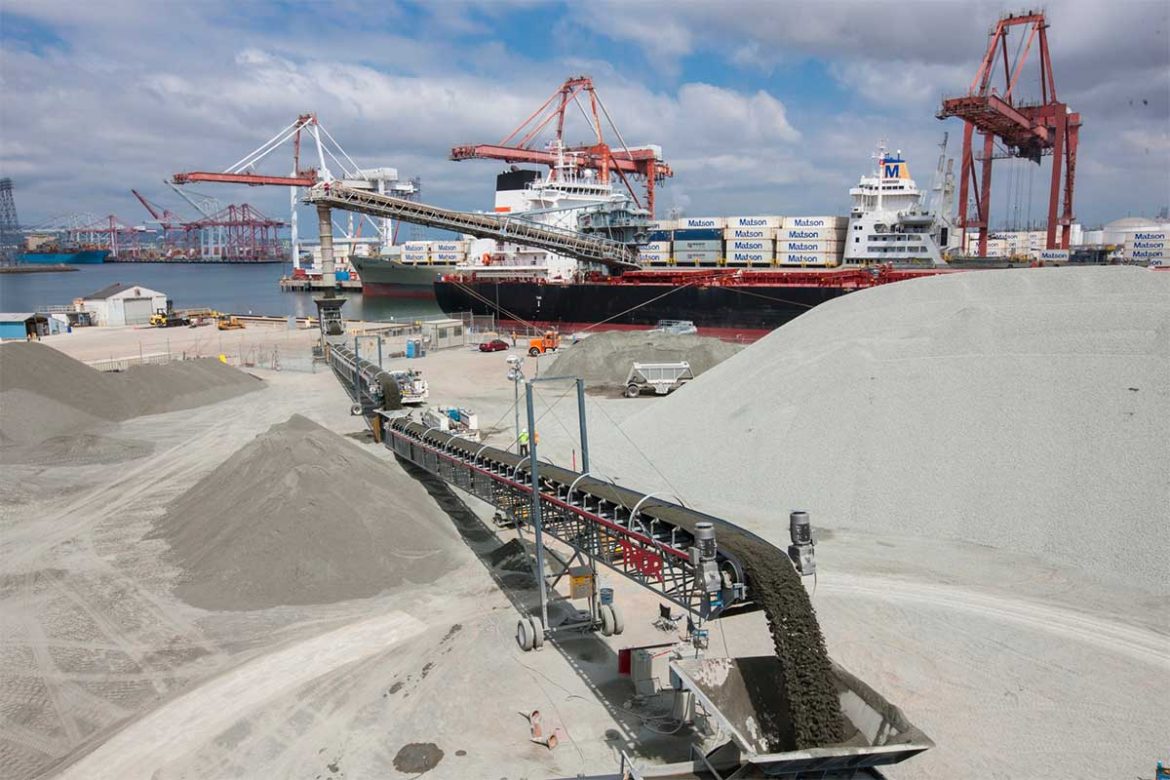 Gravel is offloaded via conveyor belt at the Eagle Rock Aggregates terminal at the Port of Long Beach in an undated image. The company wants to conduct a similar operation at the Port of Oakland, but is being met by resistance from neighbors who worry the project will create more air pollution. (Photo courtesy of Polaris Materials)

A group of West Oakland environmental advocates plan to sue the Port of Oakland if commissioners approve a project to bring sand and gravel to the Port without taking steps to analyze and alleviate expected pollution impacts on the community.

Advocates organized as West Oakland Environmental Indicators Project, a group led by residents aiming for healthy homes, jobs, and neighborhoods, say the Port is ignoring their concerns. The project by Eagle Rock Aggregates would bring 2.5 million tons of sand and gravel to the Port each year. The material, which would be used to make cement, would come ashore at Berth 22, and be stored on land at Berths 20-22.

“WOEIP remains hopeful that the Port will engage the community in a meaningful process to better analyze and mitigate the project’s environmental harm to West Oakland,” said attorney Laura Beaton, who is a partner with Shute, Mihaly & Weinberger in San Francisco and is representing the WOEIP.

“We don’t have insight into what they’re thinking,” Beaton said. “But we’re hopeful they’ll take this opportunity to work with the community to come up with a project that’s better for West Oakland.”

If the Port does not take steps to alleviate the potential pollution impacts, WOEIP will sue to ensure the Port “meets its obligations under the California Environmental Quality Act to analyze and mitigate the impacts to the West Oakland community.”

Port of Oakland commissioners took no action Thursday when the item was on their agenda because Eagle Rock Aggregates needs more time to put the final touches on a labor agreement for a full union workforce for the project, Port spokesman Robert Bernardo said.

A Port environmental planner/scientist confirmed that view. Khamly Chuop said the Port plans to keep the sand and gravel wet rather than cover it with a building or tarp. Both the building and a tarp are infeasible, she said.

Beaton said a lawsuit will not be filed until the commissioners approve the project.

Environmental advocates are also concerned about pollution from trucks and ships. Trucks may pollute West Oakland as they deliver the sand and gravel from the Port to the cement plant. Idling ships may also bring pollution to West Oakland.

Ms. Margaret Gordon, co-director of the West Oakland Environmental Indicators Project, wants the ships that deliver the sand and gravel to plug into electric power on shore. The Port of Oakland has made progress on reducing the pollution it creates. It recently exceeded the goal it set for reducing diesel emissions, which are down 86 percent from 2005 levels.

“The Port recognizes that we are one of the contributors to air quality in West Oakland,” Bernardo said. “The surrounding freeways which everyone in the region uses contribute to vast amount of pollutants. It’s important to note that more than half of those sources are from non-Port of Oakland sources.”

“The Port of Oakland has been working on air quality projects for decades incrementally and that’s how we achieve our results, one project at a time, he said. “That’s how we’ve exceeded our air quality goals.”

Will this project worsen the air quality for West Oakland residents? Bernardo said that “question assumes that the Port is the single and only factor that contributes to pollution in West Oakland. That’s not the case.”

Commissioners did listen to comments from the public, Beaton said.

This is not the first time residents have expressed concern over environmental issues in West Oakland, which historically has been exposed to some of the worst air quality in the nation, Beaton said last week, noting that the neighborhood is nearest to the Port and surrounded by freeways.

“This open-air terminal is going to add to the air pollution burden in West Oakland and impact the health of the people in the community,” Beaton said.

Residents also want to know what the Port plans to do on days when air quality is particularly bad.

The Bay Area Air Quality Management District weighed in about the Port’s proposal, saying it “is concerned with the significant and unavoidable NOx and PM impacts and recommends the project more fully address Air District comments on the Draft Supplemental Environmental Impact Report.”

NOx is nitrogen oxide, which will be produced by ships and offsite trucks. PM is particulate matter, which will be created by ships, trucks, offroad equipment and stockpiles of rock and gravel.

Port officials refused to say what measures they will be taking to minimize the dust at the project site. Instead, the Port issued a statement.

“The proposed project has several environmental-related features that exceed current regulatory requirements including electric trucks for delivery of construction materials, measures to minimize dust from the project site, and an aggressive strategy to reduce vessel emissions,” the statement said.

Port officials also refused to elaborate on their “strategy to reduce vessel emissions.”

But they touted the project benefits saying, “The proposed project would supply much-needed construction materials to the Bay Area, which will be used for many local construction projects that support housing, the economy, and jobs.”

An AB 617 community is a community in California most impacted by air pollution and subject to the Community Air Protection Program, which aims to reduce residents’ exposure. AB 617 refers to Assembly Bill 617, a law established in 2017, prompting the California Air Resources Board to create the Community Air Protection Program.

Keven Wasylyshyn, vice president of commercial operations for Eagle Rock Aggregates, did not say how his company will protect the West Oakland community from particulate matter created by the project.

He provided a statement saying, “Eagle Rock Aggregates has been working diligently with the Port of Oakland to develop a project that is consistent with the State of California’s goals for reducing overall environmental impacts while also supporting the regional need for increased housing and supporting high-paying long-term local labor jobs.”