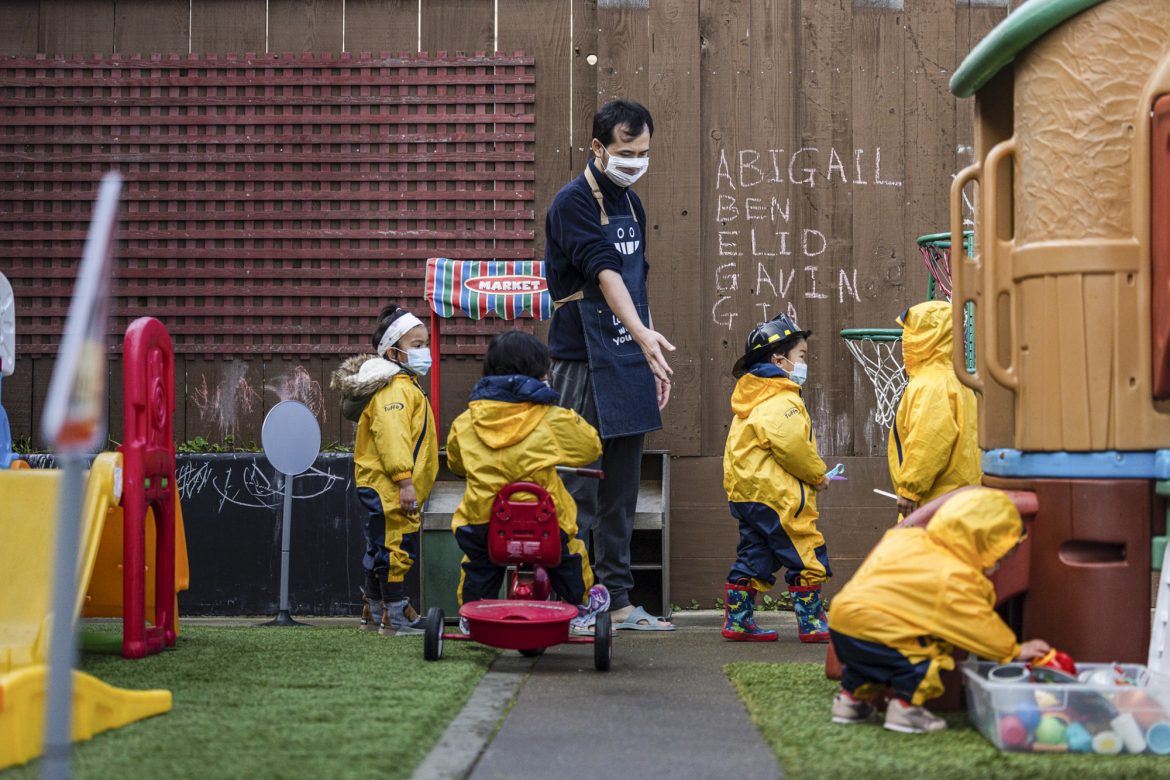 Oscar Tang, 35, watches over kids as they play at Modern Education Family Childcare in San Francisco on Thursday, January 20, 2022. The center had to close recently out of precaution after a child who attends the center had tested positive for Covid-19.

Child care providers already were struggling to meet demand even before COVID’s omicron variant tore through California — forcing shutdowns and stranding parents whose own jobs depend on their ability to find child care.

One day last week in San Diego County, only three of 22 sites operated by Educational Enrichment Systems could be open, said Celine Krimston, a vice president at the company. The rest were temporarily shuttered because of positive COVID cases or exposures among staff or children.

“We know this wave is adding to the challenges,” said Elena Montoya of the Center for the Study of Child Care Employment at UC Berkeley. “COVID cases are increasing, staff (are) calling in sick, it’s getting more difficult for providers to keep their classrooms or their doors open and that has ramifications on the parents who rely on the care.”

The California Chamber of Commerce even wrote a letter to lawmakers this week endorsing additional spending on child care.

“A robust, quality and affordable child care network is not only crucial for the development of young children, but also essential for millions of working parents,” wrote Ashley Hoffman, a spokesperson for the chamber.

Nationwide, 40% of adults in a household with children reported those children were unable to attend child care in the last four weeks because of safety concerns, according to the U.S. Census Bureau’s Household Pulse Survey, taken from Dec. 29 through Jan. 10.

“Child care workers have continued to work throughout the pandemic despite risks and fears for their own health and work with a population of children who are too young to be vaccinated,” Montoya said. “We’ve relied on them because we need child care for people to work and for the economy to function.”

“The pandemic blew up the challenges in the child care system and made them worse,” said Lauren Hogan of the National Education of Young Children.

Child care experts and advocates say the pandemic worsened an already challenging child care situation in California. They cite a labor shortage, low wages and not enough slots for kids who need child care. Now, with the pandemic and the omicron surge those problems have grown.

“It’s an invisible workforce,” said Mary Ignatius, a statewide organizer for Parent Voices. “They are incredibly loving (and) nurturing people in our lives, they are the second mothers and second fathers to our kids so we can work, but we can’t pay them in love.”

The median wage for a child care worker was $13.43 in 2019 in California. For younger children, the pay is lower — even though mandatory staffing ratios are higher for infants and younger children.

Low pay has led to increased turnover throughout the pandemic, a problem that exploded with omicron.

“We think of it as a workforce issue but it’s tough for kids, too,” Hogan said. “The transition, the constant churn and turnover (harm) kids and the long-term quality as well.”

California is down child care workers by 8%, according to a study by the Berkeley center. A September U.S. Treasury report estimated the national child care worker turnover rate at between 26 to 40% of the total workforce each year — and that was before the omicron variant.

From the start of the pandemic Rodriguez, the provider in the Riverside County city of Hemet, struggled to keep the business she runs with her husband afloat. When essential workers needed child care providers to remain open longer, Rodriguez hired another person to make that possible, but then the new hire later quit. Even before omicron hit, Rodriguez said she was forced to turn to her daughters and ask for help.

“I told my kids, ‘I’m sorry but some of you all are going to have to quit,’” said Rodriguez, whose daughters all had full-time jobs. “‘We are all going to be dirty and homeless if you don’t quit your jobs, there is no option’.”

So three of her daughters, all in their 20s, left their jobs as an Amazon driver, an assistant in a specialty veterinarian’s office, and a manager at a Wing Stop to take shifts in their mother’s child care business.

After a year, and just before the surge, Rodriguez told her daughters to find other work.

“I told them ‘Our savings (are) almost gone, you need to look for a job,’” Rodriguez said. “Maybe it wasn’t a good decision to have them quit, but my heart went out to the parents. I didn’t think we would be two years into this.”

Now, since omicron has blazed through California, she has gone back to mostly day time hours and decreased the  number of kids in her care. She said she’s turned away dozens of families.

Then, in January, Rodriguez and her husband got COVID-19 and had to close for 10 days for the first time ever.

“We are exhausted and my kids are doing other things now,” Rodriguez said. “We ripped through all of our savings. We were going to buy a second house, but now we are back to where we were before. Everything has to be rebuilt.”

She still hasn’t found a new worker, but an uncle who helped with her own kids was looking for work. Now, he’s getting CPR training and going through a background check so he can care for children on weekends.

Among child care providers in California, 77% say wages are the main recruitment challenge, according to a survey last summer by the National Association for the Education of Young Children. Among educators, 63% say low wages are the reason most leave the field, followed by lack of benefits and burnout.

Nearly half of child care providers said they are considering leaving their program or closing their family child care within the next year. That number rises to 64% among minority-owned businesses.

Restaurant work and retail jobs are child care competitors, and they appear to be winning.

“In a lot of cases, you can earn more money at Target and Starbucks,” Montoya said. “We can’t fault people for leaving these jobs for better pay and health insurance. We’re not going to be able to stabilize the system until we compensate the workforce the way they deserve.”

For Krimston, in San Diego County, hiring challenges are not new.

“I’ve been in this field since 1984 and we have always had a staffing issue,” Krimston said. “The issue has always been because of the wage that we can’t pay our staff and COVID just threw gasoline on that.”

At her centers, teaching assistant pay ranges from minimum wage to $19 an hour; teachers earn from $19 to $25 an hour, depending on their experience and education.

During the pandemic, trying to find workers has been even tougher. Krimston said she’s had more candidates fail to show up for job interviews than ever before — and these were on Zoom.

In San Francisco, Pyrena Hui and Oscar Tang operate More Than Education Family Child Care and have one employee whom they say they pay more than the local minimum of $16.32 an hour. They say they occasionally provide bonuses, too.

Throughout the pandemic, Hui and Tang were careful to follow all public health protocols regarding masks, social distancing, class sizes and sanitizing. Until the omicron surge, they never had had to close.

Then a child in their care got sick in early January.

“I was feeling really (stressed) because this is the first case in our child care,” said Hui.

The child care center shut down for 10 days while Hui, Tang and their employee quarantined. Hui and Tang paid their assistant throughout the isolation.

“We really want to keep her and she is so reliable and really cares for the children,” Hui said. “During this time, it’s so hard to find a really good teacher.”

Still, it has been tough for the couple, who had their own baby in April and feared losing their home in 2020.

Hui is also president and Chinese leader of the Family Child Care Association of San Francisco. She has a network of 250 Chinese child care providers and, in the last two weeks, she said she has heard case after case of providers dealing with positive cases  among children or staff.

The state provides some support for child care providers, won by Child Care Providers United. The union negotiated its first contract with the state last year, much of it dealing directly with support for COVID challenges.

For those who care for state-subsidized children, the state agreed to provide reimbursement for up to 16 days of closure due to COVID.  But now providers worry those days will go away at the end of the fiscal year in June if the Legislature does not extend benefits.

Child care provider Algorri in Chula Vista got sick with COVID earlier in January and had to close her business for eight days.  Without the additional state reimbursement for non-operation due to COVID and other union-fought benefits like supplemental income and payment based on enrollment instead of attendance, she said, she would have had to close long ago.

“There was no way I could have kept my assistant employed because this is not a business where you make tons of money … to use during the rainy days,” she said. “I would have had to close my business.”