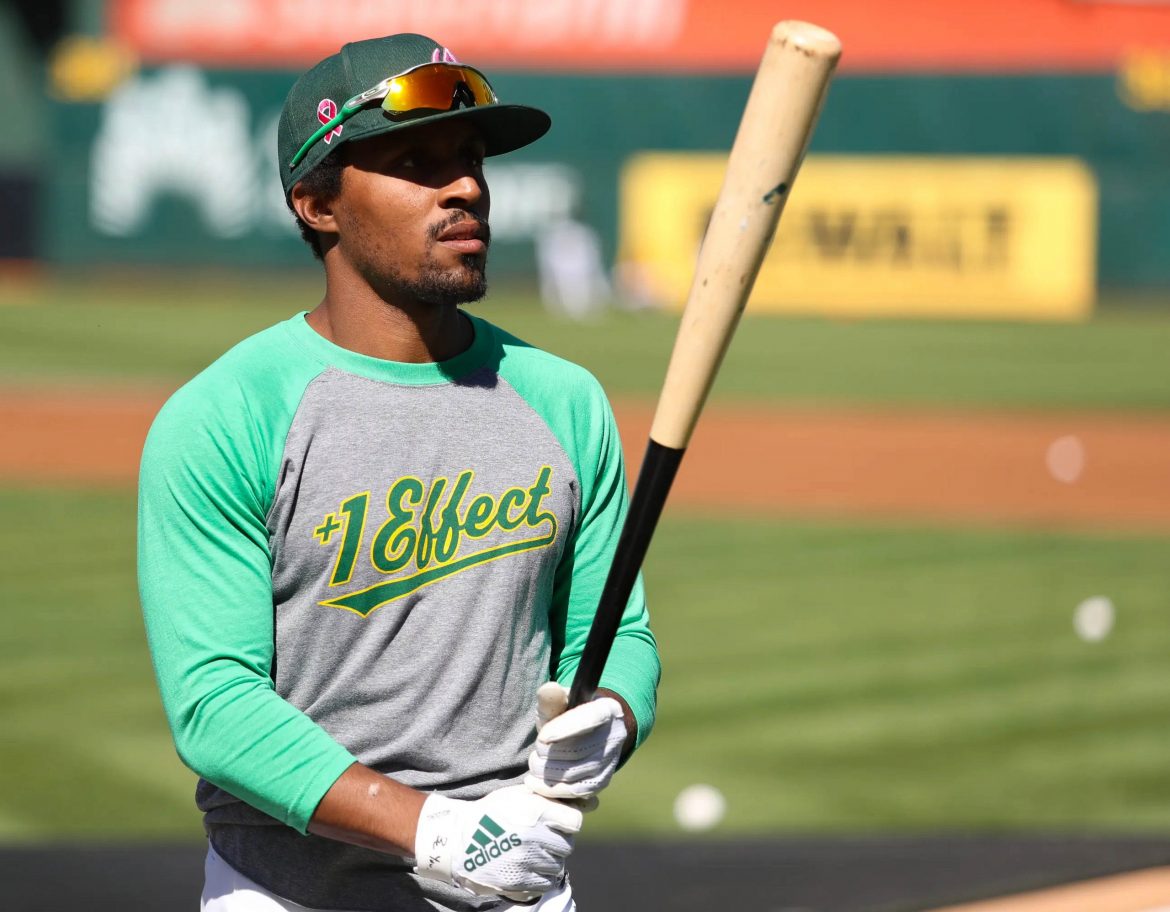 Oakland Athletics outfielder Tony Kemp in an undated photo. Kemp partnered with BreakingT to produce his +1 Effect merchandise. A portion of the sale proceeds go to the Players Alliance, a national organization committed to creating an inclusive culture within baseball. (Photo courtesy Tony Kemp)

Oakland A’s infielder Tony Kemp picked a great year to pledge a charitable contribution based upon his on-field performance.

For the 2021 baseball season, Kemp teamed up with a national organization and pledged to plant 100 trees in urban communities for every stolen base and extra-base hit he recorded.

Fortunately for the environment, Kemp, 30, produced the best season of his six-year major league career, compiling 27 extra-base hits and eight stolen bases to go along with a strong .382 on-base percentage. He was also one of only two hitters in the American League (with at least two plate appearances per every regular season game) to walk more often than he struck out.

“I’m glad I got the chance to play and show what I can do,” Kemp said.

The 3,500 trees Kemp donated were just the catalyst as PG&E, one of the team’s corporate sponsors, doubled down on the pledge “to further its support of environment and sustainability awareness,” company representative Lynsey Paulo said. “With PG&E’s donation, there will be 7,000 trees planted as part of this program.”

On Dec. 10, volunteers from the A’s, PG&E, the city of Oakland and various charitable organizations met at Sobrante Park in Oakland and planted 15 trees. Kemp said he will plant trees this spring in his hometown near Nashville.

One of Kemp’s partners in the tree planting venture is Players for the Planet, a national organization founded by former major leaguer Chris Dickerson. Players for the Planet asserts a goal of uniting professional athletes to create positive change for the environment. “Our programs are designed by the players so they can contribute wherever they see a need or opportunity,” Dickerson said.

“I always wanted to do a reforestation project,” Kemp said. Possibly as a giveback for the amount of lumber used in his profession? Kemp chuckled, but said his goal was much greater than replacing a handful of broken bats.

“I’ve always cared about the planet. I’ve been an advocate for a recycling project for a long time. This one was a no-brainer.”

Dickerson agreed that Kemp is a committed activist. “Tony has been a tremendous advocate for giving back to the community,” he said.

Even though he is not a fan of confrontation, in summer 2020 Kemp became one of the most active ballplayers speaking out against racial injustice. Haunted by the murder of George Floyd on May 25, 2020, and the unfolding civil unrest, Kemp logged onto Twitter on June 5, 2020, and posted to his followers, then numbering more than 40,000: “Let’s be honest. It’s been a tough week. If any of you want to talk or want to be more informed don’t hesitate to ask me.”

That tweet prompted a series of one-on-one direct message conversations with friends, teammates and fans about systemic racism and his own life experiences as a Black man. Kemp then formalized these conversations into a campaign called the +1 Effect.

Explaining the name of his campaign, Kemp said he wanted his perspective to achieve a domino effect, of one positive conversation leading to another, and then another, through honest and respectful dialogue.

“I ask questions. Simple questions, and there is no yelling,” said Kemp, in keeping with his distaste of confrontation. “Those who yell the loudest, what are they trying to accomplish?”

Kemp shared portions of a +1 Effect conversation he had with a suburban white woman in Texas who wanted to do a better job of combating racism but feared that she had no platform.

“Of course you have a platform and voice,” Kemp told her. “You can always be an influence and inspiration to those around you.” He went on to explain that undoing systemic racism “starts with calling out people for their offhand comments that they may not even realize are racially biased.

“Make it known that you will not tolerate racism or prejudice in any way,” he advised her, and recommended media for her to check out, including “The 13th,” Ava DuVernay’s documentary about racism in the criminal justice system; Nikole Hannah-Jones’ “1619” podcast on how slavery shapes American culture to this day; and Ibram X. Kendi’s history-driven guide “How to Be Anti-Racist.”

Kemp also gives back through the Players Alliance, an organization of major league ballplayers who work to create an inclusive culture within baseball in order to promote racial equality and provide greater opportunities for the Black community. According to Society for American Baseball Research, since Jackie Robinson broke the color line starting with the Brooklyn Dodgers in 1947, the percentage of Black players in the MLB peaked at 18.7% in in 1981 and declined to less than 10% by the mid-2000s. In 2016, only 6.7% of major leaguers were Black.

“We’re trying to get Black players to mentor kids who can’t afford equipment to play baseball,” Kemp said. “Black kids look up to us, and we’re trying to help these kids understand that they can succeed in Major League Baseball.”

Kemp, though, is realistic about the slim chances for kids to make it to the big leagues, as Kemp himself fought through early life and career struggles. His parents divorced when he was 12. He was repeatedly optioned to the minor leagues while with the Houston Astros.

Kemp drew on his inner strength and closeness to his family — especially his older brother Corey — to help get him through the rough patches.

Corey told his brother that it was never going to be easy for him to succeed in athletics because Kemp was the little guy.

“They’re always going to be looking at the big guy,” Corey Kemp said. “You’ve got to keep a chip on your shoulder, get back out there and continue to perform.”

The advice worked. “I realized there will always be guys physically stronger than me,” said Kemp, who is 5-feet-6-inches tall and 160 pounds. “But they will never be stronger mentally.”

Understanding that the baseball hopefuls he mentors will need a fallback position should their baseball dreams flame out, Kemp imparted reality to the young athletes when he demonstrated the importance of a strong educational foundation at an Alliance event in Oakland.

“I got out a book and a baseball. I asked the kids to stand on each one and see which one provided more stability,” he said. “They got the message. I told them that getting a degree is always the end goal.”

Scott Barber has represented Kemp since the ballplayer’s days with the Astros, after Kemp starred for three years at Vanderbilt University. “None of this is for show. It’s not for branding,” Barber said. “This is who he is. He’s always ready to help someone.”

For these and other charitable ventures in which Kemp participates, the A’s named Kemp the 2021 Dave Stewart Community Service Award winner, given annually to an A’s player in recognition of charitable contributions throughout Northern California and across the nation.

Kemp has re-signed with Oakland for 2022 and figures to play a prominent role with the team, especially now that the A’s need a leadoff hitter after the departure of Mark Canha. But Kemp’s concluding comments had nothing to do with baseball or his on-field expectations.

He credited his mother, who continues to do charity work, as his driving force to put others before himself.

“I wish everyone would help the planet,” Kemp said. “Treat people as you want to be treated, and the world will be a better place.”

How you can help

To donate to the nonprofit Players for the Planet, visit https://playersfortheplanet.org/.

To donate to the nonprofit Players Alliance, visit https://theplayersalliance.com/about/.

To purchase a +1 Effect gear, visit https://breakingt.com/pages/1-effect-by-tony-kemp. A portion of the proceeds go to the Players Alliance.