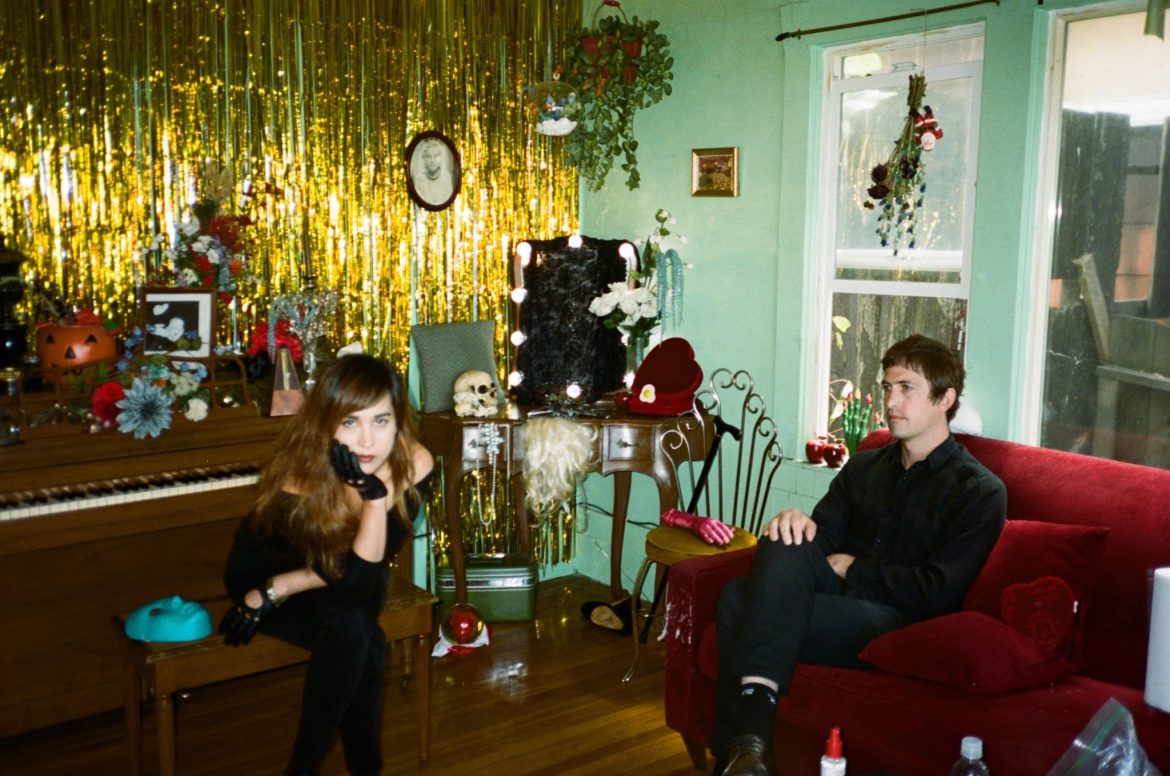 Oakland band Body Double is scheduled to play the Noise Pop Festival with Zum label mates The Acharis and My Heart, an Inverted Flame on Feb. 22. (Photo courtesy Candace Lazarou)

From its inception in 1993, Noise Pop has championed independent musicians of all stripes.

The annual Noise Pop Music and Arts Festival, once a single night at The Independent (then The Kennel Club), has since become a Bay Area mainstay, featuring an eclectic variety of established and up-and-coming artists. Previous headliners include well-known names like the White Stripes, Modest Mouse, Best Coast, Bright Eyes, Death Cab for Cutie, Television and the Flaming Lips.

After a COVID-related hiatus in 2021, Noise Pop Festival is scheduled to return next month. From Feb. 21 to Feb. 27, featured bands and artists will span venues in San Francisco, Oakland and Berkeley.

Festivalgoers can choose to purchase tickets to individual shows, or purchase festival badges for full access to all general admission concerts, happy hours and festival-related activities.

This year’s festival lineup includes King Woman, Alex G, Moor Mother and The Microphones, to name just a few. In order to familiarize yourself with a broader spread of Noise Pop artists, here are five local favorites that shouldn’t be overlooked this year.

The Oakland band, led by frontwoman Candace Lazarou, can be found on Bandcamp at https://bodydoubleusa.bandcamp.com.

What excites you most about performing at Noise Pop Fest this year?

Candace Lazarou: I wanna see what other people are making! In my last band, I was too contrarian to really appreciate what my community was doing — I never listened to new music, I took naps during other peoples’ sets and mostly complained that no one was writing good pop songs. But it was stupid — my teenage self would have killed to have my life. There were shows every day, all my friends were unhinged multidisciplinary artists and everybody was happy to help me make music projects real. But right when I was ready to debut my new positive mental attitude, COVID told me to stay home. So I’m ready to spend all my pent-up excitement to see new stuff and make new buddies. Hopefully, Body Double‘s performance will be entertaining to someone, too.

Lazarou: I’ve never seen King Woman before, but judging from the music videos, the lead singer is probably a frontperson-y frontperson, which I prefer. Also, Hand Habits seems like my kind of weirdo.

Lazarou: A tight 25 minutes, and nobody in the band talks in between songs. The songs are catchy, but they may provoke. There is guitar. And I will probably look you directly in the eye — don’t get spooked!

The San Francisco solo act can be found on Bandcamp at https://mariabc.bandcamp.com/.

What inspired you to pursue music within the last two years? What drives you?

maria bc: Every time I write or record something I’m proud of, it seems like the final time. I’m convinced that I’m going to end up music-ed out, that someday I’ll wake up and find I’ve drained all the noise out of my system. So there’s this drive to test myself, which is stressful but also exhilarating, because then, even as each new song feels like the last one, it also feels as shocking as the first one. I’ve heard a lot of songwriters say something to this effect.

What is it about your sound and artistry that make you an interesting addition to the Noise Pop Fest lineup?

maria bc: I think my vocals stand out for some people. A friend told me after a show once that I sound like I’m whispering and belting at the same time. I was really moved by that. I work to create unique textures with my voice.

Are there any artists in the lineup you’d be especially excited to meet?

maria bc: Arooj Aftab! Fortunately for me, I’m opening for her, so I might actually get the chance. 🙂 “Vulture Prince” is such an illuminating record. It’s been a guiding star through this year, for myself and so many others.

What’s next for you, creatively? Any projects in the works?

The Oakland band, made up of Maia Sinaiko, Susanna Thomson, and Max Edelman, can be found online at at https://www.sourwidows.com/.

What is it about your sound and artistry that make you an interesting addition to the Noise Pop Fest lineup?

Maia Sinaiko: I think as a band we represent a wide variety of influences — from shoegaze to Americana, folk, math rock, psych rock, grunge, the list goes on. We aren’t easily categorized, which means we’re a versatile and exciting act to bring various elements of Bay Area music together.

Sour Widows: The lineup is so incredible this year! Obviously Titus Andronicus. Alex G, Ian Sweet, BNNY, Hand Habits, Moor Mother are all big ones for us. We also love local acts Fake Fruit, Boy Scouts (Taylor [Vick] is playing what will surely be a gorgeous solo set), Provoker, Lara Sarkissian. There are a ton more!

My Heart, an Inverted Flame

The San Francisco duo, Marc Kate and Andee Connors, can be found online at http://myheartaninvertedflame.com/.

What excites you most about performing at Noise Pop Fest this year?

My Heart, an Inverted Flame: Despite having formed as a band years ago, we are only now testing our mettle live. And the fact that pretty much every band the two of us have been in has played at Noise Pop over the years makes it feel extra special to have our new project be making its debut there. Just in general, it’s a really fun festival that’s super sonically diverse and run by awesome folks. But maybe most of all, we’re especially proud to be adding some serious heaviness to the proceedings.

My Heart, an Inverted Flame: Our debut is a Zum label showcase, where we’ll get to share the bill with label mates The Acharis and Body Double, which already puts us in great company.

As for other artists, we’re especially excited to see King Woman (there’s a MHAIF collaboration in the works with the guitarist in KW) and William Basinski, who we both love.

The Oakland band, led by Shaun Wagner and Mila Puccini, can be found on Bandcamp at https://theacharis.bandcamp.com/.

What was the driving force behind “Blue Sky/Grey Heaven”? What inspired the urge to record this album?

Shaun Wagner: This album has been in the works since 2017. A very dark four years for us living in Oakland, dealing with death, depression, addiction, betrayal, and tragedy but also love, inspiration, and hope. We wanted to make something timeless that truly represents who we are without following any trends or genres. We had the opportunity to work with John Fryer of This Mortal Coil, which was a dream come true. Ever since I heard “Song to the Siren” in the film “Lost Highway” by David Lynch, I thought it was the most beautiful thing I’ve ever heard. I dreamed of somehow coming close to this world in which it was created, never thinking it would actually happen. The result is a darker and more polished sound than our first album, “Lost in the Vortex.”

What is it about your sound and artistry that makes you an interesting addition to the Noise Pop lineup?

Wagner: We don’t play local shows very often. We only make one album every five years. We take this seriously as an emotional artistic expression. We’re not really a party band or a scene band or a hip band. Sometimes it’s perfect and beautiful, and sometimes it’s a violent disaster. You never know what you’re gonna get.

Wagner: We are excited to be playing shows with our new full live band after spending five years performing with just the two of us onstage. Janice Arteaga (Silver Shadows) is joining us on drums, and Adrian Saenz (Daisy World, Flower Pattern) is playing second guitar. We just did a tour of France and the U.K. with this lineup, and we think our live sound now lives up to the recordings. Also, I like the Sonic Youth aesthetic of the four-piece band with some wild/interesting guitar noise. It really feels like a band now.

What’s next for you, creatively? Any projects in the works?

Wagner: We are both becoming more interested in alternative forms of media rather than just rock and roll. We shot a music video for the song “Traces” in the Lake Tahoe area earlier this year that Mila directed. It’s by far the biggest, most cinematic production we’ve done up to this point. Once it’s edited, it will be released in 2022. There is also another video made by Denis Barclay of Cranes Records (our European label) in Paris for the song “Soft Inside,” which he shot in Morocco. It’s really nice, almost more of an art piece than a music video. We also just bought a house in Detroit, Michigan. Maybe we’ll make another album, or maybe we’ll just become DJs playing Detroit techno. Who knows, really?

Body Double, My Heart, An Inverted Flame and The Acharis perform a show presented by Zum Audio, Talent Moat and Noise Pop at 8 p.m. Feb. 22 at Bottom of the Hill, 1233 17th St., San Francisco. Tickets, $13-$15, are available at http://www.stubmatic.com/bottomofthehill/event/10359.

All three shows require proof of full vaccination. Masks must be worn inside when not eating or drinking.