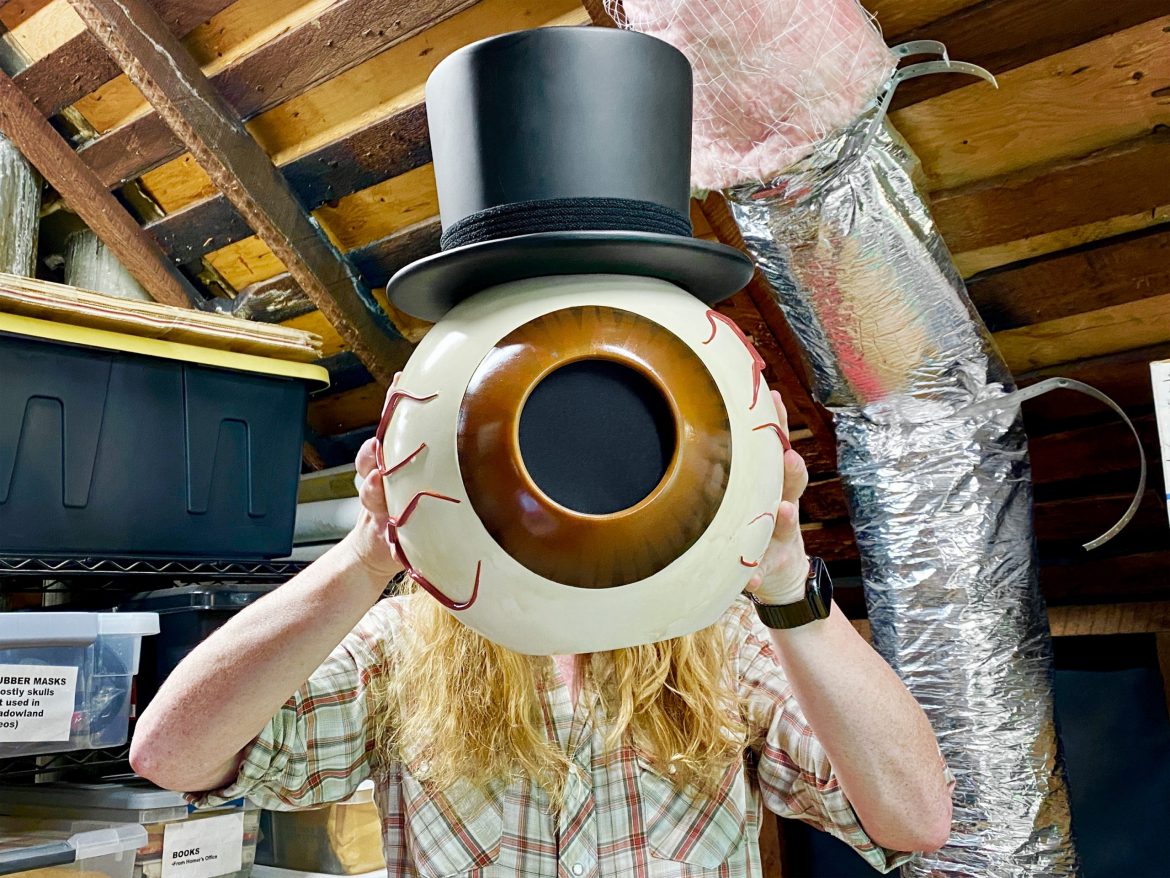 For the book "The Residents: A Sight for Sore Eyes, Vol. 1," graphic artist Aaron Tanner got to explore The Cryptic Corporation archives in San Francisco, which are full of materials from the iconic avant-garde group The Residents, known for its top-hatted eyeball masks. (Photo courtesy Jackson Tanner)

“I’ve been creating coffee-table books for bands largely from the ’80s for the last few years,” says Aaron Tanner, a visual artist known for his design work with Ween and the Pixies.

“When the opportunity presented itself to do a book with one of the most inspiring visual groups ever, I jumped at the chance.”

Tanner is referring to The Residents, the anonymous avant-garde freak group that’s been injecting the music world with absurdist humor and psychedelia since the late ’60s.

The Residents’ first studio was located at 18-20 Sycamore St. in San Francisco’s Mission District, where the group settled in 1972. The building is now an orthopedic wellness studio, but while it was in the grips of The Residents, it served as a recording studio, art studio, film soundstage and living space.

Shortly after moving in, “when the band realized that they were the only people who’d be willing to publish their work,” the group launched their own record label, Ralph Records. From then on, their 18-20 Sycamore headquarters was dubbed “El Ralpho.”

Over the last five decades, the group’s releases have varied, featuring elements of jazz, electronic music and psychedelic rock, coolly mangled by their own experimentalism.

One consistent element is the group’s delightfully surreal and disturbing visuals. Their spooky signature is the suited figure with an eyeball in place of a skull, dolled up in white gloves and a top hat.

“The Residents’ visuals were every bit as important as the music,” Tanner says. The design arm of the group’s creative operation was cheekily called Poor? No! Graphics, led by Homer Flynn, the group’s primary graphic designer and art director.

As Tanner organized the first book on The Residents’ extensive history, he was granted access to the group’s massive archive, overseen by The Residents’ management group, The Cryptic Corporation, based in San Francisco. Throughout this archival dig, Tanner unearthed numerous gems, including rare and unseen photos, artwork and quotes from the likes of Danny Elfman of Oingo Boingo and Les Claypool of Primus, who was born in Richmond and raised in El Sobrante.

Since its release on Jan. 7, all of this exclusive content is available to sift through in “The Residents: A Sight for Sore Eyes, Vol. 1,” compiled by Tanner and released by Melodic Virtue.

Shortly after the book’s release, I spoke to Tanner about the process of compiling The Residents’ visual artifacts, and the exciting discoveries he made along the way.

What inspired this project?

Aaron Tanner: I’ve been creating coffee-table books for bands largely from the ’80s for the last few years. And when the opportunity presented itself to do a book with one of the most inspiring visual groups ever, I jumped at the chance. Prior to publishing, I was Ween’s designer for over 15 years, and all of their self-released albums were distributed through MVD [Melodic Virtue]. After I realized that they were working with The Residents as well, I asked for an introduction.

What drew you to The Residents? How has the group inspired you as an artist and musician?

Tanner: The Residents’ visuals were every bit as important as the music. The work of Poor? No! Graphics was lightyears ahead of its time. And along with Butthole Surfers, no two groups have had more of an impact on the way I approach my own design work. There’s no greater reward than working with this legendary imagery.

The Residents have a lengthy history, so organizing the archive must’ve been a massive undertaking. Where did you begin? What was your process like?

Tanner: The book took about a year and a half to complete. However, since we started this project one month before the pandemic hit, it took a lot longer than we were initially hoping. I postponed my trip to visit The Cryptic Corporation archives nearly a year until it was safer to travel. However, in the meantime, the band provided quite a bit of material that they had already digitized. But nearly all of the unreleased material had yet to be unearthed.

Care to share any exciting discoveries you made while exploring the archives?

Tanner: There were many surprises while digging through the The Cryptic Corporation archives — unused artwork, handwritten notes and contact sheets of iconic photo shoots. A personal highlight was the blueprint of their first studio, 18-20 Sycamore St. It was where everything from “Santa Dog” up through “The Third Reich ‘n Roll” was recorded and “Vileness Fats” was filmed. And in the same box, I found a notebook that contained all of the in-progress lyrics and music video concepts for “Duck Stab! / Buster & Glen.”

Any notes that might be especially interesting to San Francisco residents about the group’s history?

Tanner: The prior tenant of The Residents’ first studio, 18-20 Sycamore St., was the magazine Western Kennel World. After the group had moved into the building, they discovered it was still full of dog photos — one of which was used on the cover of their debut EP, “Santa Dog.”

Why do you think the influence of The Residents is especially relevant today?

Tanner: The stories and testimonials I received were evidence of how far reaching The Residents’ influence has been. From Paul Reubens to Eric André and Danny Elfman to Zach Hill [Sacramento-born co-producer of Death Grips and drummer for Hella], their infectious output has seeped into their contemporaries’ psyche as well as musicians and performers over 30 years younger than them. And even though the band has been at it for 50 years now, they still have a few surprises up their sleeves.