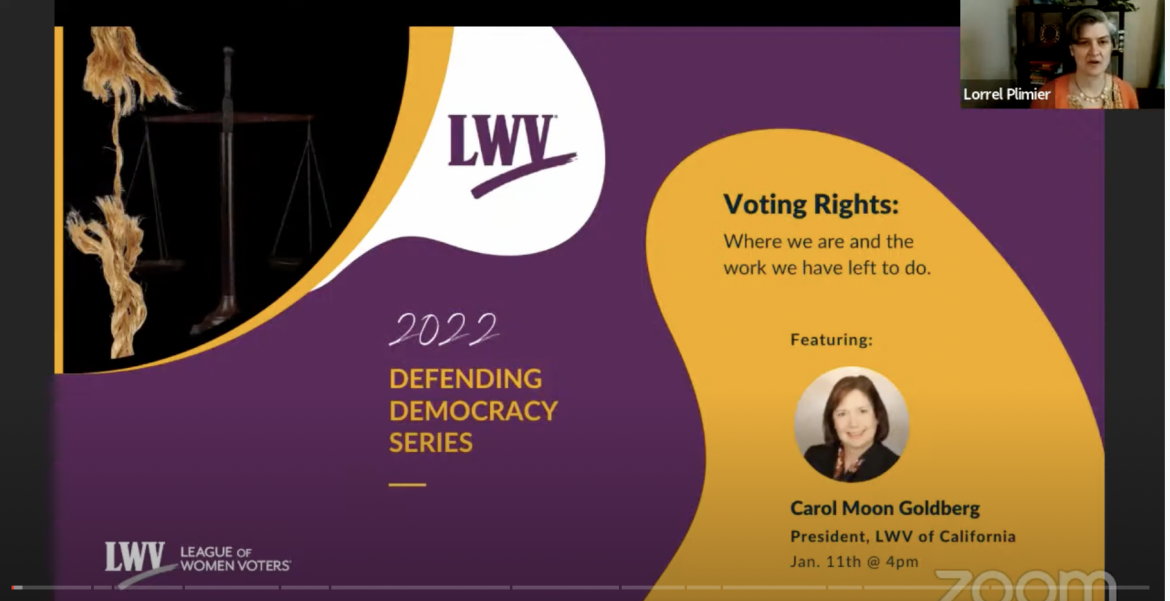 This recap of the Jan. 11 event is courtesy of LWV Piedmont. You can watch the full recording HERE

The League of Women Voters of Piedmont launched its Defending Democracy Speaker Series on Jan. 11, 2022 with a discussion on voting rights from Carol Moon Goldberg, president of the League of Women Voters of California. The upcoming events in this series include Ranked Choice Voting with Rob Richie on Feb 10th, Election Law and the Supreme Court with Erwin Chemerinsky on Mar. 1, International Perspective on US Democracy with Dr. Fiona Hill on Mar. 30, and Election Subversion and Disinformation with Rick Hasen on April 5. The series is cosponsored by Leagues across the country in Collier County, Florida; Gunnison Valley, Colorado; Oakland, California; The Pikes Peak Region, Colorado; Portland, Oregon; Pueblo, Colorado; Santa Barbara, California; and Solano County, California.

Goldberg opened her presentation with a brief history of voting rights in both the United States and California that highlighted the country’s expansion of the right to vote beyond white, male property owners. This expansion was marked by the ratification of the 13th, 14th, 15th and 19th U.S Constitutional Amendments; the 1965 Voting Rights Act; and HAVA, the Help America Vote Act that provided for funding to help states update their voting equipment after the controversy surrounding the 2000 presidential election.

Goldberg went on to discuss some of the protections for voters that are currently in place in California. For example, California provides for online voter registration and same day voter registration. Beginning in the November 2020 election, California mailed vote-by-mail ballots to all registered voters because of the special circumstances of the pandemic. The state has recently extended that provision to all future elections. California has also enacted laws to curtail partisan gerrymandering. The FAIR Maps Act creates criteria and guidelines for cities and counties in California to ensure transparency and fairness in the redistricting process. The League’s work in California has been instrumental in the passing of laws protecting voting rights including some of those mentioned above and Prop 7, which restores voting rights to people who are on parole many of whom are tax paying, contributing members of society who deserve a voice in their government.

Goldberg closed her presentation with a focus on the current federal voting rights legislation and suggestions for what we can do to support voting rights. The Freedom to Vote Act protects and expands the right to vote, decreases the influence of money in politics and curbs partisan gerrymandering. The John Lewis Voting Rights Advancement Act (JLVRAA) effectively restores section 2 of the Voting Rights Act of 1965 that was gutted by the Supreme Court in Shelby County v. Holder in 2013. The JLVRAA would require federal preclearance for certain changes to state voting laws and would result in federal voting rights protections to counter racial discrimination. The League is part of a coalition of 230 organizations supporting these federal bills. We can support voting rights ourselves by visiting the Declaration for American Democracy, a site representing this coalition, clicking on “events” and taking action.