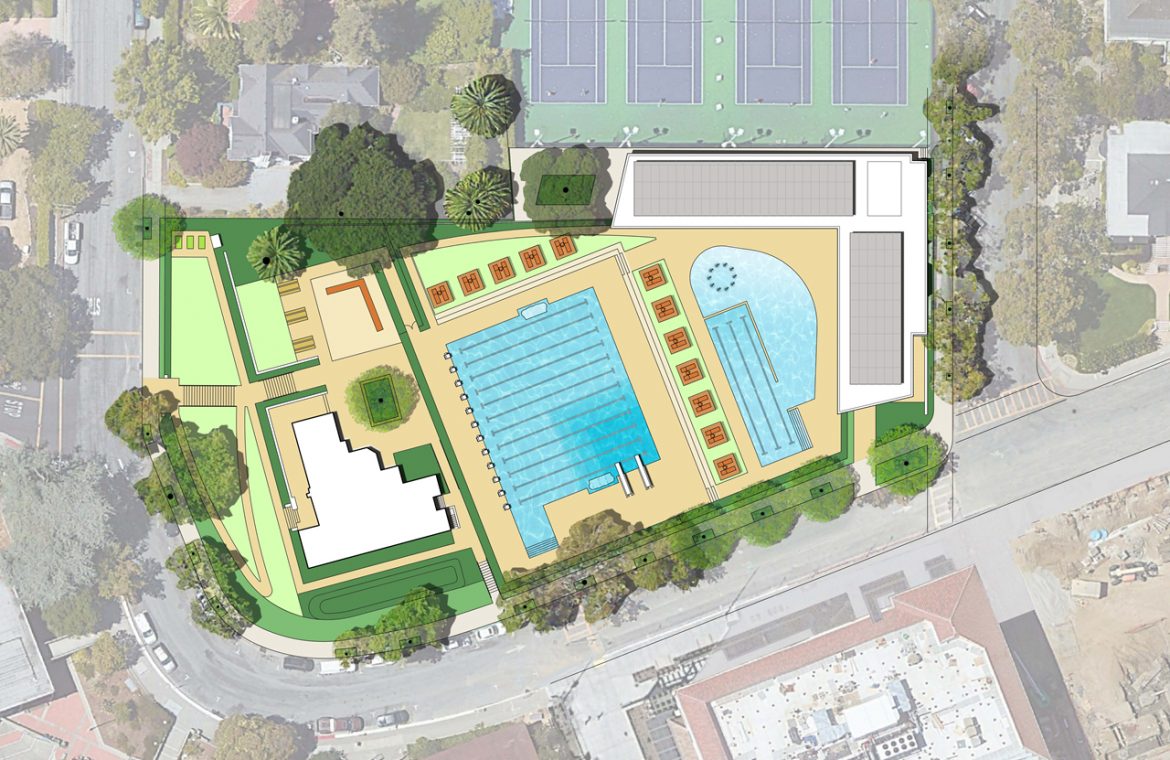 The final conceptual plan for the new Piedmont Community Pool complex, including two pools, a two-story building hosting offices, equipment, and multipurpose rooms, as recommended by the city’s Pool Advisory Committee on Jan. 6, was unanimously approved Tuesday night by the City Council.

It’s the latest milestone in a campaign that started in mid-2020, when the first efforts to support a bond measure (which became Measure UU) were conceived.

The next step now is for the project’s architectural firm, Berkeley-based ELS Architecture and Urban Design, to begin the “schematic design” phase of the pool project.

The new pool plan was developed from the original 2016 plan, said Clarence Mamuyac, president and CEO of ELS and a Piedmont resident. The conceptual plan approved Tuesday night calls for 10,400 square feet of water in the two pools, as opposed to 4,670 square feet in the three pools of the old pool that closed in March 2020. The L-shaped pool building would abut the back side of the Corey Reich Tennis Center.

“The whole facility is going to have an interesting personality, especially as day turns into night,” Mamuyac said.

In November 2020, more than 68.52 percent of Piedmont voters approved Measure UU, which  allows the city to borrow up to $19.5 million from the sale of general obligation bonds to replace the city’s 57-year-old pool. Operated by the City of Piedmont from 2011 until its COVID-19-related closure in March 2020, the old pool had become a maintenance and repair nightmare. Until the old pool was finally drained in early September, it had been leaking an estimated 3,000 gallons of water each day.

Mamuyac last year told the council he will oversee an architectural process for a pool facility that will be as “net zero emissions” as possible.

“This will be one of the greenest projects around,” he said. A challenge will be to heat the water using only electricity, which Mamuyac said isn’t required by building codes; he estimates about 40 percent of the needed power can be generated on-site.

Three members of the public implored the council to liberate the pool project from using any fossil fuels at all.

“I love the pool, but I love more the idea of giving our kids a decent chance to survive the climate,” resident Hope Salzer told the council. “Let’s cling to the higher moral ground, please.”

The pool complex, Mamuyac added, should blend in well with the schools and homes in that Magnolia Avenue area whose styles of architecture vary widely. The entire complex, he added, will be accessible per Americans with Disabilities Act guidelines.

Shortly after Measure UU’s passage, the City Council established the five-member Pool Advisory Committee to advise throughout the design process and to serve as a conduit for the community’s voice in the design refinement and construction of the Piedmont Community Pool. The committee held its first meeting on July 12, and most recently met Jan. 6. Its members are Steve Roland (chair), Sarah Olsen Meyjes, Lynne Wright, David del Villar Fernandez and Carolyn Pan.

Also providing input over the past year about pool complex design has been the general public – Piedmont residents who attended any of three workshops led by ELS, held Nov. 2 and 16, and Dec. 14. Roland on Tuesday night noted that the city conducted a series of surveys of what residents want to see in a pool complex, and sent out regular email updates of pool planning efforts.

Roland told the council this conceptual plan is actually yet another starting point, to be “tested, prodded and scrutinized” to determine whether everything within it is indeed possible.

Mamuyac said that if all goes well, physical work on the project could begin in this calendar year, and hopes it will be open in time for Summer 2024.

Council members said they were elated to approve the conceptual plan, and that they are thrilled the project had advanced to where it’s come, including the green aspect.

“The environment is near and dear to everyone’s heart here,” Vice Mayor Jen Cavenaugh said.

Piedmont Fire Chief David Brannigan reported at Tuesday night’s City Council meeting that COVID testing by Curative Inc, in Piedmont, which has been on Sundays and Mondays from 8 a.m. until 3 p.m. on Sundays and Mondays from a van parked near City Hall will, starting Thursday, Jan. 20 operate Monday through Friday from 8 a.m. until 3 p.m in the Piedmont Community Hall parking lot at 711 Highland Ave.

Brannigan said that, because of the infection surge related to the COVID omicron variant, that testing demand will mean all testing must now be done via an appointment, and that there will be no walk-up testing for at least the time being. The testing is free. Community members can sign up for testing at https://cur.tv/piedmont. Appointments may not be released until the day before testing.

Mayor Teddy Gray King said she’d like to see testing hours one at least one weekend day, being as some people can’t take time on a weekday. City Administrator Sara Lillevand said that possibility will be discussed this week.

New COVID-related use for funds

The council voted 4-0 Tuesday night to shift $100,000 in American Rescue Plan Act Funding Plan money — originally intended to pay for a full-time Piedmont Unified School District nurse — to pay for several part-time health clerks to administer COVID tests as part of the district’s testing effort. That testing has increased with the surge of the omicron variant.

Lillevand said the school district was unable to hire a full-time nurse, and wanted to use that federal money as part of the district’s response to COVID.

This change, Lillevand said, is “very much in line” with the school district’s plans for using that money to help fight COVID.