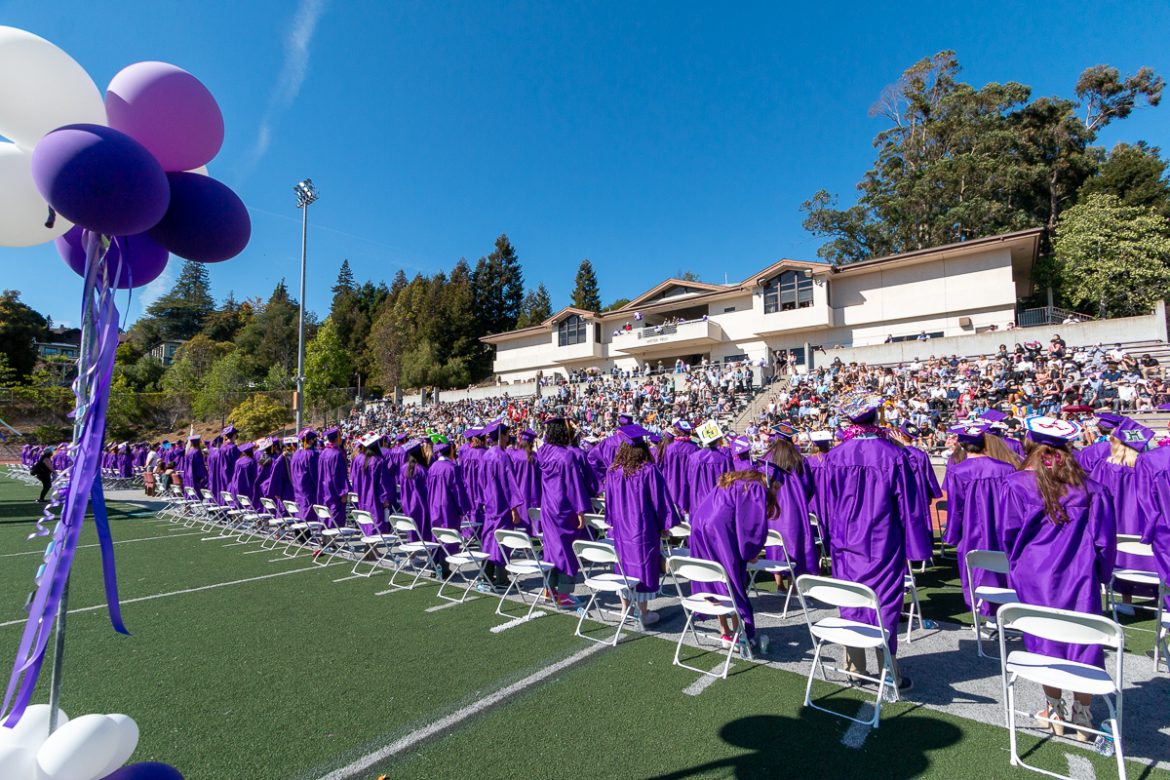 The bleachers were nearly full with friends and family members to celebrate Piedmont's 2021 graduates.

California high school graduation rates didn’t change much last school year compared with the previous year, according to data released by the California Department of Education earlier this month. The state graduation rate increased less than 1 percentage point — from 90.7% to 91.3%.

That number excludes schools with Dashboard Alternative School Status, which are county Office of Education-run jail and special education programs, continuation schools and other schools, including charter schools, that serve a high percentage of students at risk of dropping out of school because of credit deficiencies, a high level of transience or various other obstacles in their lives. The state has determined that schools with this designation are not comparable to other K-12 public and charter schools. If the graduation rate of DASS schools is factored into the total, the statewide graduation rate would be 84.2%.

The numbers might seem surprising considering the 2020-21 school year consisted primarily of students attending class at home over Zoom, but state flexibility may have helped keep the graduation rates from falling.

State lawmakers allowed parents to request that D’s and F’s earned that school year be changed to pass or no-pass grades and offered students the option to take a fifth year of high school if needed. Many districts also allowed last year’s juniors and seniors to graduate by meeting the state’s minimum requirements — made up of 13 courses totaling about 130 units — rather than the higher number of units most districts require.

“It’s quite diminished requirements,” said Russell Rumberger, a professor emeritus of education at UC Santa Barbara. “In a way, that has always been the case. I’ve looked at it nationally. California has one of the lowest state requirements of any state in the country.”

California school districts historically add their own prerequisites to the state minimum, generally requiring students to take 22 to 26 courses to earn a diploma, earning about 10 units for each class.

During the pandemic, districts allowed students who could prove hardship to graduate with the state’s minimum number of units, although some required more. Nevada Joint Union High School District, for example, allowed students who were struggling academically last school year to petition the district to allow them to graduate with 160 units, instead of the 210 units the district usually requires.

The disparity in graduation requirements among districts makes it difficult to know what a student’s diploma represents, Rumberger said. A person with the same number of units could be a graduate in one district and a dropout in another, he said.

Despite that, Rumberger said, he is concerned about the impact of lower diploma and course requirements on college-bound students. He worries some won’t have the content knowledge to be successful.

It’s not clear how many students requested pass/no pass grades or to graduate with fewer units because the California Department of Education does not track that information.

“It is true that the academic experience during the pandemic is different, absolutely, but we don’t know if there is any way to know if there is a dip in preparation,” said State Board of Education President Linda Darling-Hammond.

An increase in the state’s five-year graduation rate showed that many students took advantage of expanded summer school programs and added credit recovery programs offered by their school districts to get their diplomas, Darling-Hammond said. The five-year graduation rate tracks all the non-graduates from the preceding year to determine how many graduated after a fifth year of high school.

California’s five-year graduation rate increased slightly from 87% in 2019 to 87.3% last year, with about half of the 429,000 students who graduated completing their A-G requirements both years.

California spent $4.6 billion for summer school and extra learning time to confront the academic setbacks most students, particularly low-income students and those with limited internet access, faced during the Covid-19 pandemic.

Most schools instituted a number of other measures to help seniors graduate, including moving to block schedules that allow students to take more classes and add tutoring sessions into their school days, as well as meeting with students to set up graduation plans and expanding after-school tutoring programs.

District officials attribute the overall decrease in the graduation rate to more students moving out of the school district and more students with moderate to severe disabilities receiving a Certificate of Completion instead of a diploma.

Eighteen of the district’s students opted to take a fifth year of high school last year, according to Kathleen Leehane, director of supplemental programs and accountability at the district. Nine students were exempted from local graduation requirements and allowed to graduate with the state minimum requirement, and about 125 students had at least one grade from the 2020-21 year changed to pass/no pass, she said.

State Smarter Balanced assessments and diagnostic tests given at schools show that high school students last year did as well as or better than students in prior years, Darling-Hammond said. She said the pandemic and accompanying distance learning took more of a toll on younger students than on high school students.

“We can wring our hands a lot, and there are a lot of reasons to be worried, but I don’t think we have a lot of evidence that they are substantially behind,” she said.