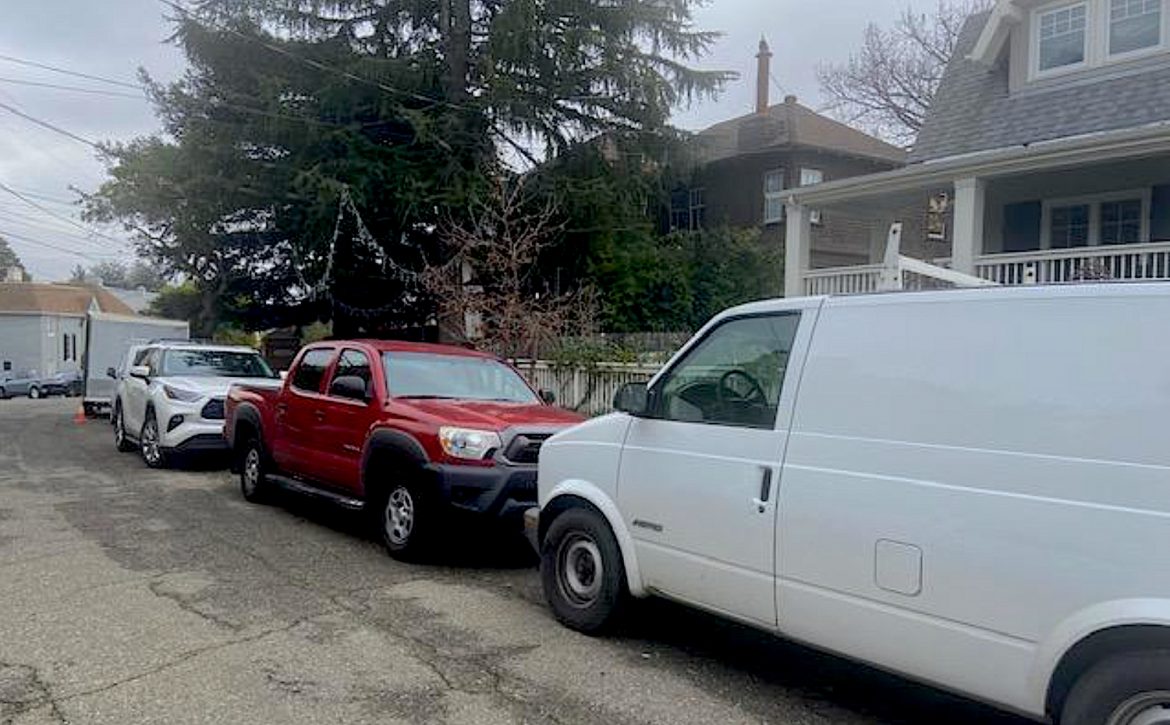 Streets clogged by construction vehicles are just one complaint that can be lodged against you when common courtesy -- and proper procedures -- aren't followed.

Be a good neighbor when undertaking home repair or renovation. It will save lots of headaches later.

Like many households, we suffered water damage as a result of the recent “atmospheric rivers” that required some fairly extensive repairs, and we’d been waiting for the crew to return after the extended holiday break. (Everyone deserves some time off but let’s get back to work fellas.) Even so, our two handymen didn’t account for the three trucks, one LARGE trailer, and several orange cones outside. (A van, a truck, a trailer, OH MY!)
Turns out, our neighbors to the left are remodeling. Having owned their aging home for 20+ years, a new kitchen had been a long-time coming. Once finished, it’s sure to enhance and update their classic Brown Shingle. Still, as their adjacent neighbor, it might have been nice to know before the demo began and the porta-potty rolled in . . .

They’re not alone. Our street is teeming with at least a half dozen construction projects for houses up and down the block. As a Realtor, not to mention a serious serial renovator, I’m all for home improvements. In fact, we took our own house down to the studs and completely rebuilt it just a few years ago (our fifth such project). Based on past experience, I can tell you that friendly prior notice lays the groundwork for all kinds of latitude and courtesies you may need to call upon as you move through the process.

As every battle-scarred homeowner who has undertaken a kitchen or bathroom remodel knows, renovating doesn’t happen overnight. Forget what you see on HGTV; your custom kitchen isn’t emerging in the space of one week – or even two. There’s one unfortunate project down the block that’s had a fence around it for the better part of two years, and currently, it’s boarded up with no progress in sight. (Evidently, the homeowner has fired several crews.) Meanwhile, an unrelated project was subdivided into three parcels in order to add two additional homes to the site. It’s been nonstop cement trucks and dumpsters for the people at the far end of the street for YEARS!

As construction isn’t just noisy, messy, and inconvenient for the undergoing property, but for the surrounding neighborhood as well (let’s start with the lack of parking), there’s a right and a WRONG way to go about renovating your home. Take heed; a pissed-off neighbor can wreak all kinds of havoc on your remodel beginning with an unwelcome call to the planning department. At worst, an angry neighbor can get your property red-tagged  (aka Cease & Desist!) immediately stopping the work and delaying any progress for weeks, if not months. (Let’s not even go there.)

My advice to my Buyers who will be undergoing remodeling of any consequence is to begin with a short and sweet note that goes something like this:

“Hello Neighbor: We’re excited to be moving into the neighborhood and looking forward to meeting you soon. As the house will be undergoing major renovations over the next several months, we ask for your patience and understanding while we work to make this lovely home our own. We expect the work to take 6-8 months, and we will do everything within our power to meet that deadline, with the caveat that not everything is within our control. Please feel free to reach out if you have any questions or concerns.” (Include your emails and phone numbers and DO expect a few calls.)

This type of outreach is even more important if you live in a condo and the banging will be coming through the walls, although admittedly, covert construction projects are less likely to get by a condo board. By comparison, home renovations often happen surreptitiously, behind closed doors, especially if the neighbors are undertaking the work without a permit. (NOT a good idea.) In these cases, homeowners are even less inclined to alert the neighbors and that’s a mistake in the making. (People don’t usually respond well to surprises unless they involve a big red bow on top of a shiny new SUV.)

However, if you are rolling the dice and undertaking work without a permit, it’s probably MORE important that you let your neighbors know. Again, upset neighbors can stop a job faster than you can spell “surreptitiously.” (It took me four tries and still, I had to rely on spell check.)

However, if the renovation involves elements that change the outside of the house (new doors, windows, balconies, additional stories, etc.) you’d be well advised to pull a permit and alert the neighbors beforehand, as what follows will likely require a posting of some kind, and an official letter from the planning department requesting the neighbors’ input. Absent that, DO expect some nosy neighbor to call the planning department to find out what’s what.

Here’s where a little prevention is worth a pound of cure.

I worked with one savvy architect several years ago who preemptively invited everyone on the street into the site for bagels and coffee to go over the blueprints in person before submitting them to the city. With a few small concessions, he won the neighbors over and eliminated any battles before they began. When it came time for approval at the planning department, his extensive plans sailed through without a single objection, and the plans were approved on the spot with no additional changes required.

Note to Neighbors: “input” is your opportunity to state your opinion and weigh in (not to be an obstructionist). Once the project is approved and underway, it’s too late to object, but don’t forget that you may need your neighbors’ approval one day on your own remodeling project(s). If you’ve gone out of your way to make things difficult, expect swift retribution come your turn. (People tend NOT to forgive and forget where neighborhood strife is concerned.)

Finally, if the work involves plumbing, electrical upgrading, windows, roofs, or structural changes of any sort, these improvements legally require permits. My advice is to swallow the pill, pay the piper, and APPLY FOR THE PROPER PERMITS! (That’s me being emphatic.) Don’t forget to FINAL the permits once the work is complete. Although you’ll likely be reassessed on your property taxes based on the cost of the improvements, it’s much more painful to finalize outstanding permits years later when the codes have changed and walls have been closed.

Let’s understand that unless the improvements are primarily cosmetic (new paint, countertops, backsplashes), Buyers tend to be skeptical of work that has no permit record – as do appraisers! At the very least, the lack of permits is a disclosure item when you put your house on the market, as in: “Improvements to the kitchen and bathrooms were undertaken without the benefit of permits.”

That’s your recipe for remodeling, renovation, OR construction, not to mention thoughtful human behavior. If you choose to ignore it, don’t say I didn’t warn you.